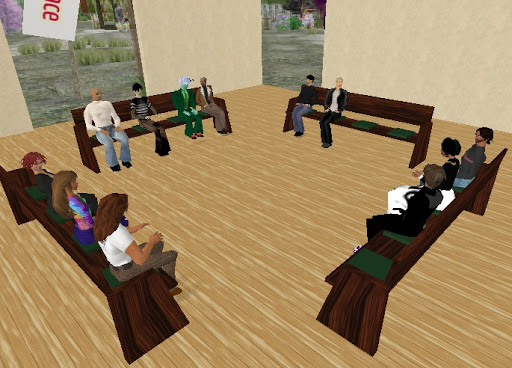 Otenth Paderborn tells me that he has decided to start up a Quaker group in Second Life and is organizing the first Quaker service on Saturday February 10 at 9AM PST at (appropriately enough) Quaker (155, 22, 31) .  I am very excited about an in-world Quaker service, although I have my doubts about how “spiritual” the event will feel.

The Quakers, or Religious Society of Friends as we preferred to be called, are a small but vibrant religious community that have our roots in 17th century England.  We emphasize that there is “that of God in every person” and try to practice tolerance, peace, truth and loving kindness in our dealings with each other and the world. I have been a Quaker for about ten years, drawn by the political activities of Quakers, but eventually convinced by the underlying beliefs and community of Friends.

One of our strongest traditions is to seek God in the silence, with our services dominated by long periods of quiet meditation. During these times, anyone who feels led can speak out of the silence a message from the heart. Often these come in the form of prayers, or questions, or personal reflections.  How this practice will translate into the virtual world, I don’t know.

If you are curious or interested, please stop by on February 10th.  After the fold, you can see Otenth’s complete message, and some useful links.From Otenth Paderborn:

There are not yet any organized Quaker activities in SL, but we do have a group: “Religious Society of Friends Quaker”. Sign up if you want to know when something happens or would like to make it happen!

The Religious Society of Friends, often known as Quakers, arose amidst the religious, social, and political upheaval of mid-seventeenth-century England.  Today, Quakers can be found around the world, although total numbers worldwide are  below 400,000.

Early Friends had the insight that every person has within the potential for direct communion with God (George Fox expressed this insight variously as “Christ has come to teach his people himself” and “that of God in everyone”). The Quaker movement has also understood this inward experience as requiring outward expression in the way one lives one’s life. From these core insights arose many of the distinctive beliefs and practices of Friends, including peace, simplicity, and equality.

Friends today have a wide range of theologies and worship practices. There are evangelical Christians, mainline Christians, radical Christians, and post-Christians; theists and non-theists. Worship ranges from silent waiting for God’s inspiration to an order of service with a prepared message, congregational singing, and pastoral prayer, and everything in between.

To find a meeting or church in the United States or Canada, try http://quakerfinder.org

2 thoughts on “Seeking the Light in virtuality: Quakers in Second Life”