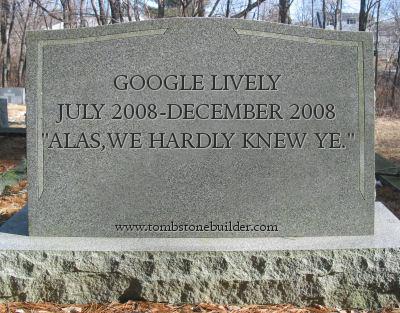 Despite not being in the best of moods myself, I will try and be as generous as I can about yesterday''s announcement that Google Lively is dead.  They posted on their blog today that their first experiment in creating a virtual world will close its doors on December 31, 2008.

There been lots of bitching on the interwebs about how sucky Lively is.  Several call it a poor imitation of Second Life , IMVU and other virtual worlds.  Some wondered why it didn't leverage better the other Google offerings like Google Earth and Maps.  Others noted that it had no realistic revenue model.

Here's the deal: Lively is a 2.5D virtual world designed by a small team of Google coders on their "20% off hours."  It was never meant to be enterprise-ready or a featured app.  Lively was basically an R&D toy that Google nicely released to the public to play with and explore while they tinkered with it. It worked just fine for what it was, had some fun gadgets and cute avatars, and prompted lots of silly and quasi-NSFW room creation.

So calling Lively a "failure" is kind of besides the point. It's only a failure if Google didn't learn something from the experiment, which I'm sure they did — about scaling, user-generated content, client stability, etc.

Because when Google decides it wants to go whole hog into the virtual world / MMO sphere, everyone else better watch out. It's going to blow the doors open.