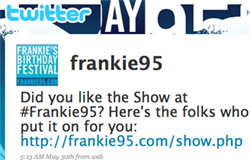 About a month ago my friend David sent me an email asking about how we could use the micro-blogging service Twitter to help spread the word and coordinate a swing dance festival that we were helping organize.  We started brainstorming and decided to try it out.  As it turns out, Twitter is a pretty effective tool for event organizers.

I will describe in the post the three basic applications that we used Twitter for: public communications, volunteer coordination and tracking participant feedback. Perhaps it might help others out there thinking about how these micro-blogging services  can be best leveraged to make your event as successful as possible.

From May 21-25, 2009, about 2,000 dancers, musicians, and jazz enthusiasts descended on New York City from all over the world to participate in the Frankie Manning 95th Birthday Festival.  Frankie Manning was a legendary swing dancer, a master of the art of lindy hop and an inspiration for thousands of swing enthusiasts globally.  Sadly, Frankie passed away in late April, just a few weeks shy of his 95th birthday.

The task of organizing the Frankie 95 Festival was monumental and unprecedented for the lindy hop community.  A small army of volunteers were involved in an array of important responsibilities, from event registration, stage management, merchandise sales, housing, VIP relations, media and marketing, and transportation. The Festival principally took place at the Manhattan Center in midtown New York, but many events took place at venues around New York City, and participants and volunteers were being housed in dozens of hostels, hotels, and homestays spread out all over New York and New Jersey.

So timely internal and external communications were key to the successful execution of the Festival.

That said, our target population are not necessarily the most tech-savvy people.  Unlike the folks who go to events like South by Southwest or E3 where Twitter use is very common, lindy hoppers span the range of technological sophistication – from total geek to near luddite.  Many of our participants were from older generations of dancers, dating back to the original innovators of the dance who lindy hopped at the Savoy in the 30s and 40s.  So it was a real question how our community would react to this cutting-edge communication tool.

There were three basic applications of Twitter in the organization of the Frankie 95 Festival:

I will detail each of these in turn.

We had several tools for getting the word out about the Frankie 95 Festival to our community:

As the Frankie 95 Festival came closer, we realized that the Festival might benefit from having a more instantaneous means of reaching our participants.  As much as email is convenient, being able to rapidly send out very short messages to several hundred participants seemed like a good idea.  And the fact that Twitter is accessible via the web, through various free desktop and mobile applications, and via SMS text messaging meant that people could get the information in whatever way made most sense for them.

Getting people to sign-up for Twitter was a pretty simple process. We just included in our email updates information on how to sign-up, pointing them to http:/twitter.com/Frankie95, instructing them to go through the registration process, and then “follow” the Frankie95 account.  We encouraged people to add their mobile device to Twitter, so that they could be receiving updates via SMS text, even if they were not getting their email or accessing the web during the Festival.

Soon after, we started using the Frankie95 account to send out timely updates to people, including registration deadlines, requests for help, and changes to the schedule.  As people began seeing the value of the Twitter feed, they would “re-Tweet” the information out to their own followers, increasing the reach of our information and expanding the number of followers to our account.

During the Festival, the Twitter feed was a very helpful tool for getting out instant information to our attendees.  During much of the Festival, people were dispersed at various venues and locations throughout the city.  And the evening dances were packed with entertainment.  So there were very few moments when we could easily address the entire body of participants.

If events were running behind schedule, we could tweet out that the a concert would start 45 minutes later than originally listed.  Or when we were featured in a New York Times story, we could quickly get out a link to that article to our participants and others.

To the right is an example of some of the tweets that we sent out to our followers.

All told, we sent out nearly 100 public tweets in the run-up and during the Festival that reached 475 followers.

Along side our public Twitter feed, we decided to experiment with setting up a private Twitter group for just our staff and volunteers to exchange messages.  This was to supplement other channels of communication, namely cell phones, a small number of walkie-talkies, and face-to-face gatherings.  The idea was to create a common channel that the main team leaders could use to stay in touch with each other at any time.

There are actually a number of complicated steps to setting up a private Twitter group.  In broad strokes this involves the following:

Ideally, this would be something that a volunteer could just do for all of the other team members and then send them instructions.  But we were able to get 29 of our key volunteers and staff to set this up for themselves, with some coaching from myself and David.

During the event, staff and volunteers were able to tweet out messages to each other, such as “need more volunteers at front desk” or “security is being very strict about bag policy.”  David also sent out encouraging messages to everyone during key parts of the Festival to keep everyone motivated.

One last application of Twitter was as a way of tracking participant engagement with our event.  We did this in two ways.

First we could see who was re-Tweeting out information about the Festival to their followers.  This was a good indication to us that we were providing info that they considered valuable enough to pass along.

Secondly, we continually reminded people to use the hashtag “#frankie95” in their tweets, so that we and others could track the larger conversations going on about the Festival.  This was a good way of finding out how people were reacting to the events, what media they were creating and sharing, and how they were feeling in general.

Here’s some of the reactions we were able to mine from Twitter using the hashtag:

So did people think that Twitter was valuable to them?  I polled people over Twitter to see if they thought this was a useful service for them as participants or volunteers.  Here are some of their reactions.

The Frankie 95 Festival staff and volunteers had more involved reactions to the internal Twitter group.  Here’s some of their thoughts:

All-in-all, I would say our Twitter experiment was a success.  We were able to get out targeted communications out to our desired public, we facilitated inter-team coordination that would have been difficult and expensive to do over other channels, and we tracked what people were saying about our event.  Twitter doesn’t replace the need for a good website, email, and print media strategy.  But it is a relatively simple and effective tool to increase your communications options for messaging various groups involved with your event.

Lastly, this post was simply an overview of how we on the Frankie 95th Birthday Festival team used Twitter for our particular event, and is not meant to be an exhaustive outline of the various applications of Twitter for event organization.  I’m sure there are other ways of using  micro-blogging services like Twitter that we didn’t think of.  And ways of doing what we did better.

That said, I hope these ideas were helpful to you.

While these new communications channels like Twitter and Facebook are useful for event organizers , they can also create opportunities for misinformation, flamewars, and other negative outcomes.

A couple days after the Festival, we received an email from someone informing us that an individual may have contracted the H1N1 virus (also known as the “Swine Flu”) during the Festival.  This person attended all of the major events and those potentially exposed hundreds and hundreds of people to the virus.

We knew that we had to get ahead of this news and disseminate it as quickly as possible.  Because it would only take one Facebook status post, one reply to a discussion board thread, one twitter update to cause a panic among our 2,000 participants. (“OMG, Frankie95 gave me the pig flu!”)  We consulted with medical professionals, quickly crafted a carefully worded message ,and sent it out via email, the web and our Twitter feed, hoping that we were forestalling a health crisis.

The crisis is not over, but I think our speedy and informed response averted a public relations and health nightmare.

2 thoughts on “Twitter as an Event Organizer’s Tool: Our Experience with the Frankie 95 Birthday Festival”