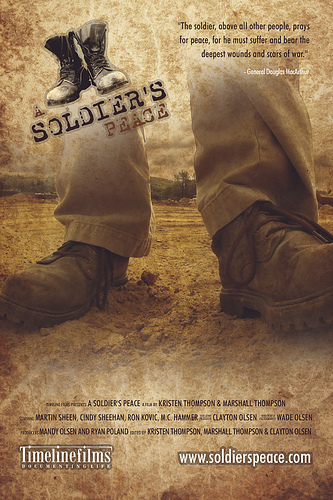 I just got word that Netroots Nation  and Virtually Speaking are hosting this evening the virtual premiere of A Soldier's Peace, the inspiring documentary about Iraq veteran
Marshall Thompson's peace walk across the state of Utah.

Thank you for attending the Second Life premier of the film "A Soldier's Peace".  Netroots Nation in Second Life and Virtually Speaking are very proud to sponsor the  premiere of this simple yet powerful film.
****
We invite you to walk through our Iraq War Memorial before or after the film event, where we have erected one unadorned marker for each son or daughter killed in Iraq, and a larger marker for the uncountable Iraqi dead.

When Army journalist Marshall Thompson came home from a tour of duty in Iraq, two things were clear to him – the war is wrong and he needed to do something to stop it. Marshall sets off on foot to walk the entire 500-mile length of his conservative home state of Utah in the hopes of getting people talking about war and peace. All along his 27-day journey, Marshall meets other peace-minded Utahans, as well as those who vehemently oppose the idea of a solider calling for an end to war. No matter what your views are on the War in Iraq, A Soldier's Peace will leave you with something to think about.

****
Sponsored by:
Netroots Nation in Second Life is the virtual version of the Netroots Nation annual convention for progressive bloggers, blog readers, politicians, and policy makers.  NNSL provides an interactive and community-based way to participate in the convention for those that cannot attend in person, as well as serving as a gathering spot for progressive minded people, groups, and organizations in Second Life.

For more information about the film, visit its official website at www.soldierspeace.com , and to find out more about the hosts, visit www.nninsl.org and virtuallyspeaking.ning.com.