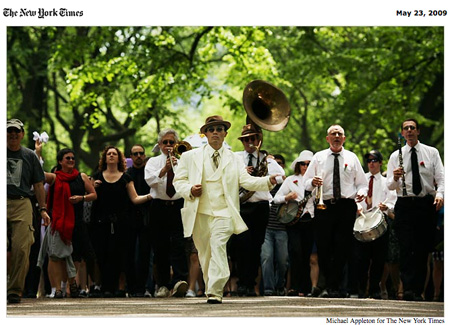 I'm not sure anything could encapsulate my entire year better than this one picture from the New York Times. For me it was a sublime, bittersweet moment — leading hundreds of people marching, dancing, clapping, making music, laughing and crying in celebration of the life of one humble man who touched us all.

The year 2009 was a year full of great joys, awesome adventures, and a major loss.  Here's a recap of the last twelve months in my crazy life.

As one of the administrators at Yehoodi.com, it was a banner year for us as the web-based hub for the global lindy hop community.  We celebrated our eleventh year of operations, which is like a millennium in Internet time.  Our weekly Thursday night dance, the Frim Fram Jam, continues to go strong.  And our podcasts and other media are more popular than ever.

Our major accomplishment for the year will be the launch on Monday, January 4, 2010 of the latest version of our site, Yehoodi 3.0!  The product of countless hours of coding, design, planning, bug-catching, and conversations, seeing this baby hit the public web will be so gratifying to myself, our brilliant coder Spuds and our talented UI-guy Poke Alex.

I'm so thankful to be a part of this amazing team of Frankyboy, Spuds, LilieBlue, Shorty Dave, and Effervescent, along with our awesome staff and volunteers.

This was a year of new challenges and great changes as I began my new role as assistant director of the Online Leadership Program at Global Kids.  I was involved in a number of fun and engaging youth programs at GK, including the "I Dig Zambia" virtual fossil dig, the production of a youth-created machinima video on child sex trafficking, and a virtual conversation with a Ugandan teen talking with other youth in Second Life about HIV/AIDS in Africa.  I spoke at several conferences and produced a number of virtual events, including a virtual forum for the FCC.

Oh, and I got to interview DMC!  I love my job.

There was lots of crazy fun dancing in 2009.  From being a Thriller zombie in the Halloween Parade to teaching Quakers how to connect to the Spirit through social dance, my funky fortieth birthday jam, participating in the "Brooklyn Bombshells Revue" in the Coney Island Mermaid Parade, and even my first paid breaking gig — at a kid's birthday party!

One of my biggest dance challenges ever was figuring out how to teach 13-year old girls how to break!  It was a lot of fun and a tremendous learning experience for me.

The loss of swing dance legend Frankie Manning, shortly before his 95th birthday in May, was a major blow to the international lindy hop community.  But rather than simply mourn his loss, we chose to celebrate the life and legacy of one of the finest dancers in America by throwing an enormous swing dance festival in New York City in May.

My main responsibility was to organize all of the social media and
social networking to promote and support the Frankie 95 Festival. It
was a really great experience using Twitter, YouTube, Flickr, Facebook, Yehoodi, and email marketing to support this important event.

One of our goals was to increase the public profile of Frankie Manning and lindy hop as an art form, which I think we accomplished.  Press coverage included a PBS documentary, a New York Times article and obit, a Wall Street Journal video blog, even a shout-out on "So You Think You Can Dance"!

And one of the proudest moments of my life will be leading Frankie's funeral procession up Fifth Avenue and into Central Park with hundreds and hundreds of lindy hoppers following me.

In mid-2009, I decided to fork my blog and create a new site devoted
to examining the nonprofit and public sector work happening in virtual
worlds.  The result was Betterverse:
"Covering the Intersection of the Public Good and the Metaverse."  In
it's brief initial run, I've reported on some dramatic changes and
developments in this nascent field.  It does seem like Betterverse
fills a niche not really covered by any other news or blog service.  So
I'm looking forward to how the site and the virtual public sector field
develop in 2010.