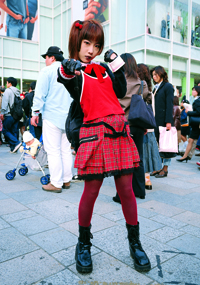 Yesterday I got a chance to check out the "Japanese Fashion Now" exhibit at the Fashion Institute of Technology.  It's a small, but intriguing overview of some of the major influences Japan has had on the fashion world internationally.

From the angular minimalism of Issey Miyake to the "rebellious conformity" of the various Japanese sub-cultures, the show covers a wide range of design territory in a relatively small collection.  I particularly liked the balance between men's and women's fashion, including a whole section on how English and European styles have been re-mixed and re-interpreted by Japanese designers.

I've always been a big fan of "Cosplay" culture, in which young people create elaborate outfits in homage to their favorite manga and anime characters. The artistry and skill it takes to fashion these intricate costumes is incredible, which both boys and girls engage in. While most public attention seems to go towards the more tittilating "Lolita" and "gothic Lolita" sub-genres, the cosplay world incorporates everything from pirates to Space rangers to nekos (cat-like characters.)  I would definitely be a steampunk cosplayer if I was a teenager!

The show is well-curated and elegantly presented.  That said, I found myself hoping that a more critical lens was focused on some of the larger socio-political issues raised by these various fashion trends and styles.  What does it mean to have white teenagers copying Japanese kids who are copying Japanese cartoon characters who are dressed in Western styles?  How do we understand Japanese appropriation of Black urban culture in their dress and even skin tone?  Are there aesthetics of race at play when we see white models and mannikins wearing Japanese fashions?  No real answers here, but a lot of pretty outfits!

1 thought on “From Kimonos to Cosplay: “Japan Fashion Now” at FIT”