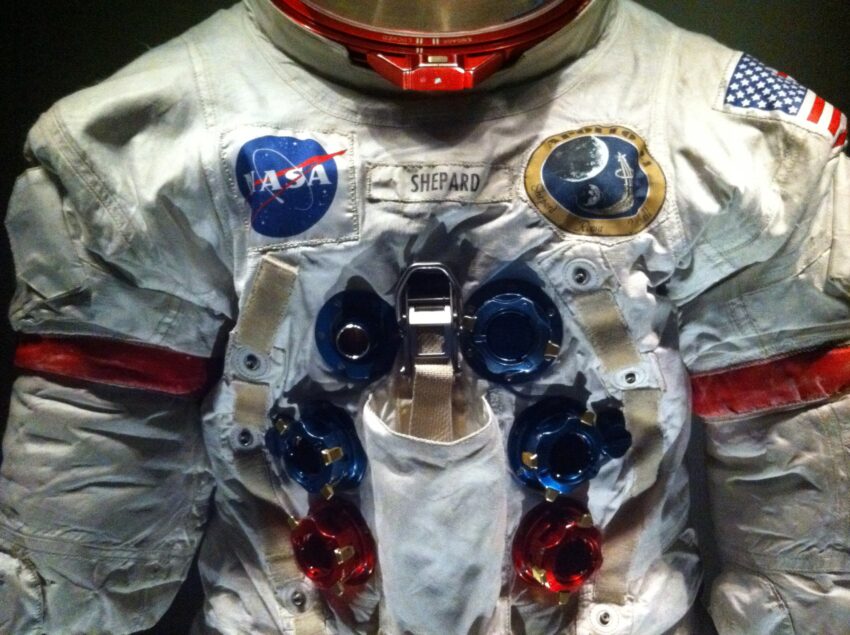 I’ve been a space geek for as long as I remember.  When I was a child I had a book called Our Galaxy or something like that, with cool facts about planets, stars, galaxies, black holes and other astronomical phenomena.  I read it like a million times.  I had glow-in-the-dark stars and planets on my bedroom ceiling, a giant cutaway poster of the Enterprise on the wall, and a constellation finder by the bed.

So why it took me 41 years to visit the Kennedy Space Center is a complete mystery.

The Kennedy Space Center Visitors Complex is basically a themepark for rocket nerds. Yesterday, I got to experience it with a scientist, a computer programmer, and a geeky dancer. It was the perfect crew to wander the park with.

The visitors complex is enormous.  You could easily spend a couple of days there going to all of the exhibits, shows and tours, although your average non-geeky family will probably be happy with just a one day trip. For my group, we only got to see a fraction of what I would have liked to have explored in the complex.

We started at the delightfully cheesy “Robot Scouts” exhibit, a tour of the various space-faring robots that have been used over the years, from Vikings I and II to Pioneer and Cassini. 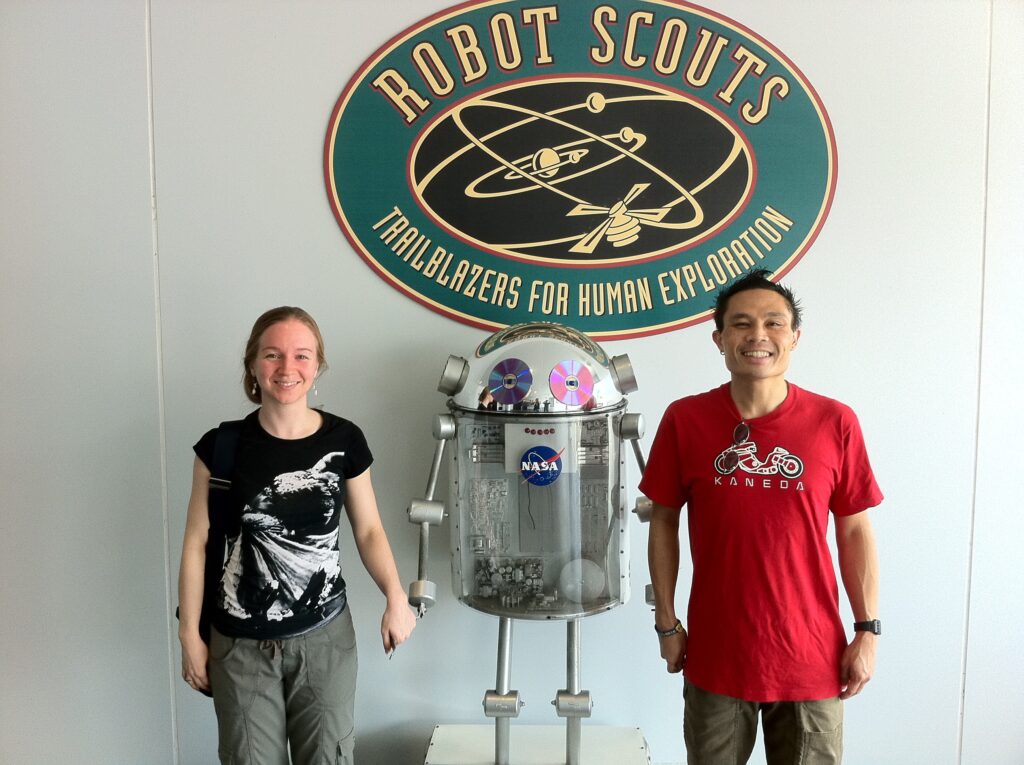 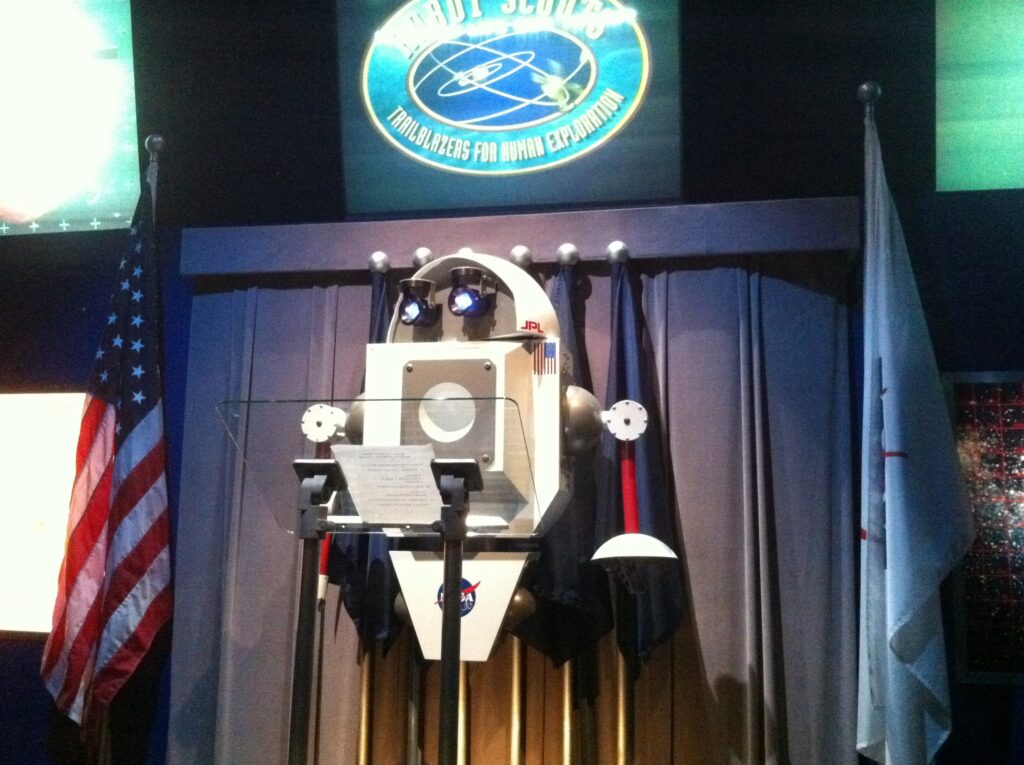 The tour is narrated by a combination of video featuring a non-convincing actress playing one of the NASA scientists and a robot trading one-liners and factoids.  The exhibit does do a good job of explaining why robot probes are in many ways much more practical than manned space trips, since robots are more durable, require less sustenance, and can travel for years without complaint or distress.

Then we headed to the rocket garden to see the dozen or so awesome rockets on display.  There are simulations of space capsules that you can crawl inside, which gave you a good idea of how challenging an environment it was for the first astronauts. 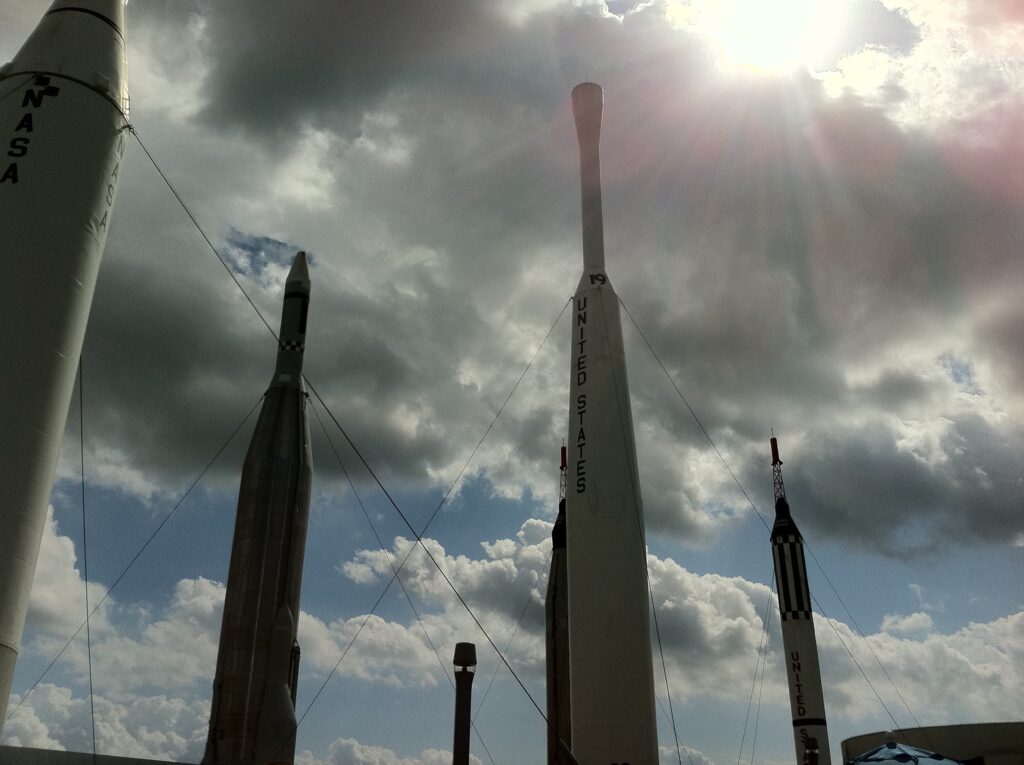 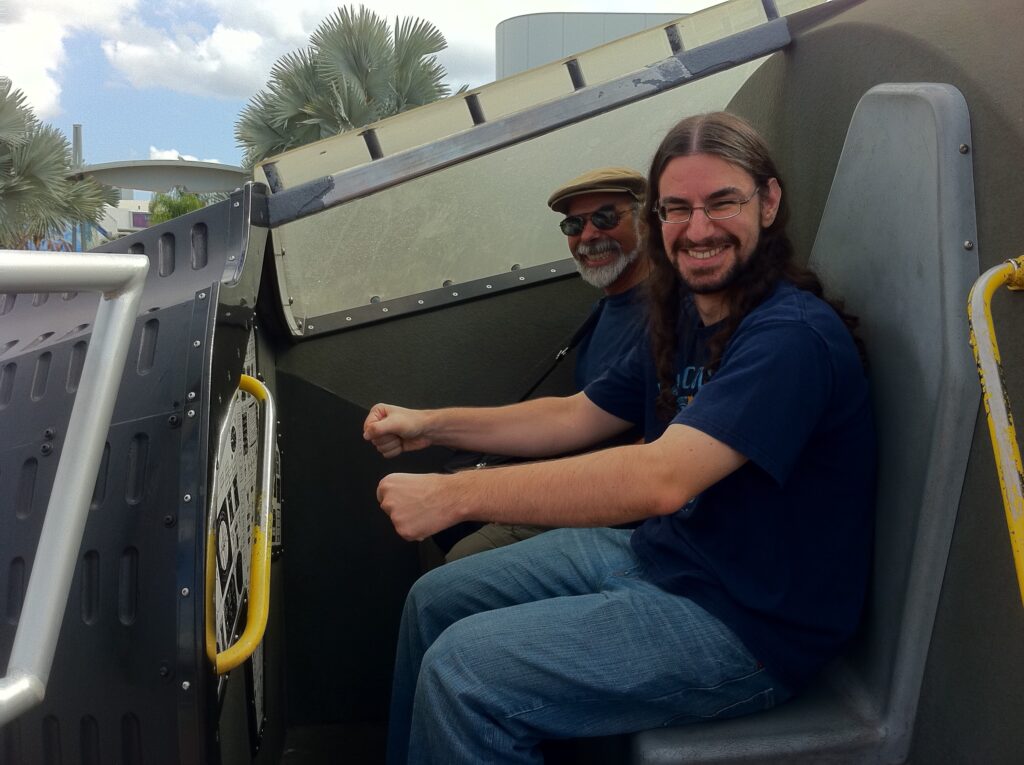 At the rocket garden, there’s a catwalk leading up to one of the capsules that just screamed “The Right Stuff.” So I had Adam and Emily do the slow astronaut walk toward the camera. Sorry about the shaky camera — it’s because I’m laughing!

After the rockets, we boarded a tour bus to visit the observation gantry and the Apollo / Saturn V Center, a couple of miles from the visitor’s complex.

Okay, the observation gantry was kind of boring, I have to admit. There was a somewhat interesting video about all of the technicians, engineers and other hundreds of thousands of personnel it takes to successfully launch a space shuttle or rocket.  But otherwise it was just a tall observation deck looking out on the space shuttle WAY in the distance. 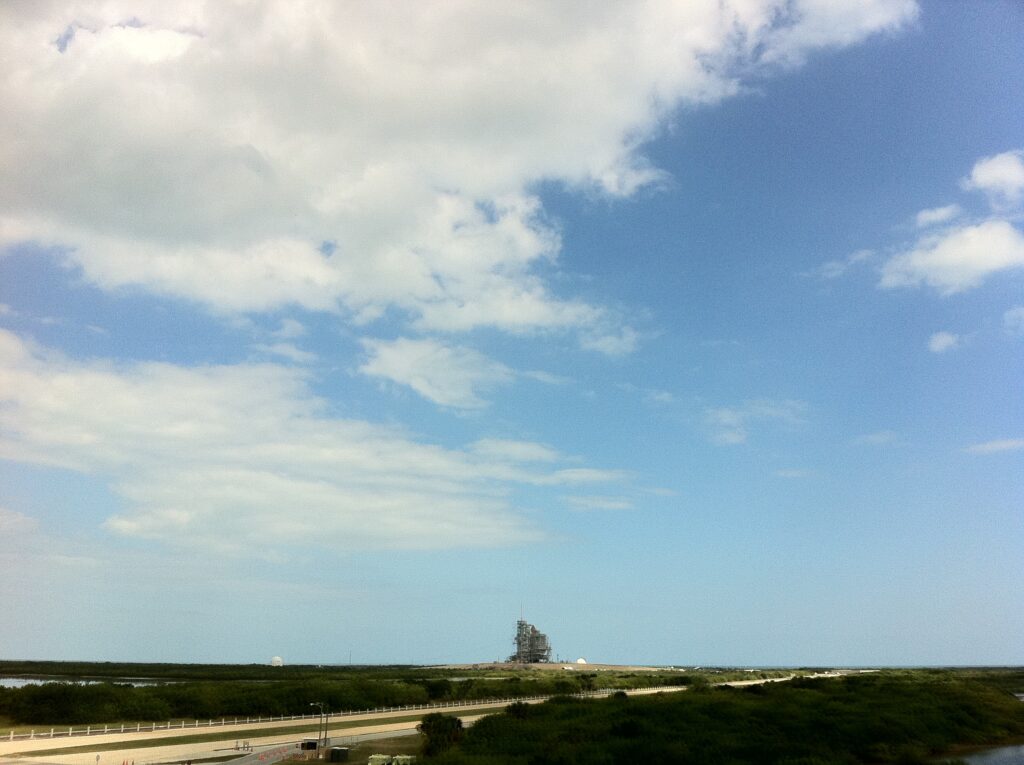 What the observation gantry had that was awesome though was “Dippin Dots: Ice Cream from the Future.”  Normally I think that Dippin Dots are just dumb.  But here they were totally apropos.

The awesomest part of the Kennedy Space Center visit was the Apollo/ Saturn V building.  The massive hangar-like space is dedicated to the first manned trip to the moon, explaining to the visitor that this was the most ambitious undertaking in the history of humankind.  A bold statement, but after seeing all of the hundreds of thousands of people involved in making the exploration of the moon possible, I kind of believe it.

The major attraction is the actual Apollo / Saturn V rocket, lying on its side and suspended from the ceiling.  It’s the definition of AWESOME.  You are filled with awe that humans created such a massive vessel to explore the stars four decades ago.  I was so blown away I couldn’t even take a picture of it.

Our final stop was, of course, the Space Shop.  Supposedly the largest space-focused store in the world, its two stories of all the NASA and space chochkas anyone could ever possibly want.  I managed to escape with just a tee-shirt, a mug and a magnet, but I REALLY wanted a flight suit and helmet! 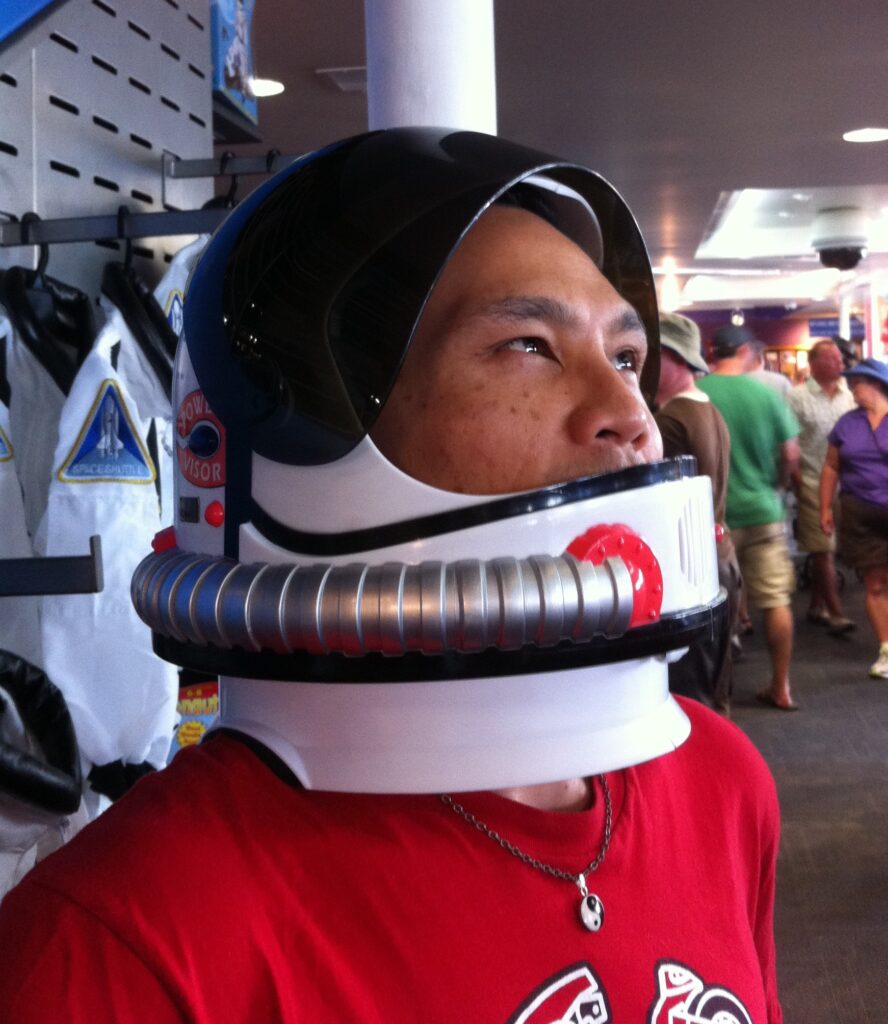 And that was just a short visit.  There’s so much more I didn’t get to do: meet some real live astronauts, see “Star Trek Live,” do the Space Shuttle Experience, see the Hubble Telescope exhibit, check out the enormous wildlife sanctuary that the Space Center resides within and more.

For a government-sponsored theme park, the Kennedy Space Center visitor’s complex is surprisingly engaging, well-planned and educational.  Creating a rich visitor experience that teaches both young and old the benefits of science, engineering and technology is truly laudable.  It kind of makes me wonder what other government agencies could benefit from the theme park experience?

More pics from the trip here!