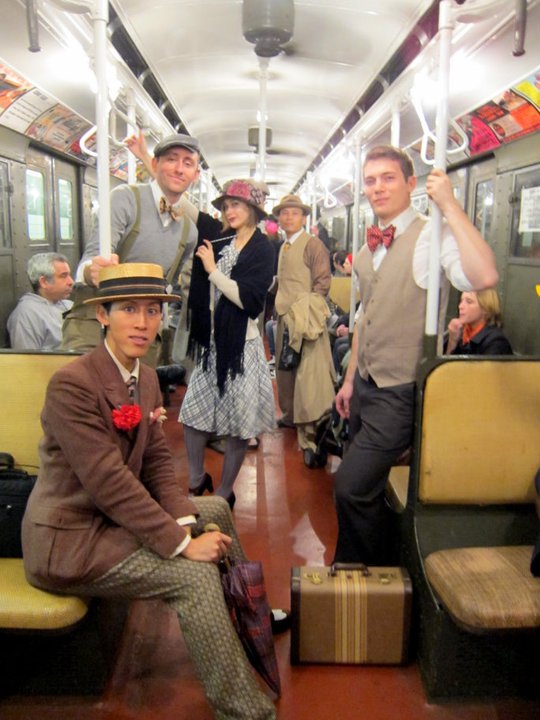 Today was one of those days when I love New York so much that it hurts to think of leaving.  Where else could I be dancing on a classic 1940s subway train with a couple hundred other vintage attired revelers, while a hot jazz band plays?

The occasion was the "Nostalgia Train" that the MTA does during the winter holidays, assembling a half-dozen perfectly preserved subway cars from decades past, complete with wooden seats, adorable ads from the era, and electric fans above the cars. The nice folks at Levys Unique New York organized a "vintage tea party" this Sunday on one of the Nostalgia Trains, and a bunch of my friends from the lindy hop scene decided to show up.

About a dozen lindy hoppers got there at about 12 noon at the 2nd Avenue F Train stop, the festivities beginning when Mikey Freedom Hart and the Lucky Dogs started playing some classic jazz for us.  We of course all started dancing on the subway platform, drawing a crowd of appreciative onlookers. It was just the beginning of a fantastic day.

At precisely 1pm the Nostalgia Train pulled up, to cheers from the subway riders. All of us, including the musicians, piled in, and the moving tea party was on! Just the experience of being on these classic subway cars rolling from station to station was such a thrill.  I love all kinds of trains, but these vintage cars from the early days of public transportation as so special to me.  And being there with my friends all dressed up, and a friendly crowd of other riders was one of those unique New York moments.

We rattled through the various stations between Manhattan and Queens, dancing and clapping as the band entertained us.  Doing the charleston and the lindy hop on a moving train packed with people is quite the challenge!  At each stop, astonished subway riders got on and immediately took out their cameras to shoot the strange site of a swing band and vintage-attired dancers on a subway train.

Once we got to Queens, we turned right around and headed back to Manhattan on the same Nostalgia Train.  It was a fantastic trip.

Once back in the city, my friends Voon, Elaine, David and Matthew decided to head to Rockefeller Center to see the tree and take more pictures.  Voon is meticulous about shooting just the right picture in just the right spot, like a fashion photographer.  We ran around midtown shooting more pictures and having a great time. We hit up Berdorf Goodman, FAO Schwarz, and the Plaza Hotel, finally resting for a spell in a deli.

But the festivities were not anywhere near finished.  Voon knew about a swing gig in Williamsburg that a bunch of lindy hoppers were going to be at.  So we jumped back on the subway and headed out to Brookyn.

The venue was Harefield Road, a sweet no-nonsense bar in Williamsburg right off the L Train.  When we arrived at 6pm, the place was packed with barflys and dancers, enjoying the music of the awesome Cangelosi Cards band.  All my weariness faded away as I grabbed a partner and swung out.  Such a killer band.

Much later, I made my way home, in the afterglow of a fantastic day in this incredible city.