So my last two weeks in New York were spent fulfilling several "Bucket List" items that are my favorite things to do in the city.  Here's a quick rundown of what I did. Probably the only true "Bucket List" item — something that I've never done that I've always wanted to do — was to see Amateur Night at the Apollo Theater.  Ever since I started watching "Showtime at the Apollo" on late night TV in college, I've always fantasized about what it would be like to actually be there.  And despite many, many opportunities to go, I never managed to make that trip uptown.

I don't know why I waited so long. Amateur Night at the Apollo was an amazing, awesome experience. My friend Christina and I met up there on a rainy Wednesday, along with many other folks who were clearly not from Harlem.  We got some choice seats not far from the front, a party DJ already revving up the crowd as we arrived.  Some Black ladies were doing a line dance in the aisles nearby, ready for a party.

Watching frightened amateur performers step out into the spotlight before a raucus and opinionated crowd was one of the most entertaining and interesting things I've ever witnessed.  You just have no idea how someone is going to do, or how the crowd is going to react.  The large majority of performers we saw crumbled and didn't even finish their songs.  So when someone actually manages to win the crowd, it's kind of magical.

If you live in New York, you have to go. It's an experience like no other.

A completely different evening of entertainment was had on my last Monday in New York at Vince Giordano's regular gig at Club Cache in Times Square.  Vince and his band the Nighthawks do an amazing jazz concert, drawing from a book of seemingly thousands of pieces of music from the 1920s to the 40s.  And each song they perform is so tight and swinging it's ridiculous.

I was there with a couple dozen lindy hoppers, dancing and enjoying the amazing music in an elegant atmosphere.  A mostly older white crowd of diners really dig the band and seem to appreciate our dancing.  Vince does a great job of explaining the music they are playing as well as shouting out local celebs and dignitaries in the audience.  Even I got a shout-out, which was very nice of him. 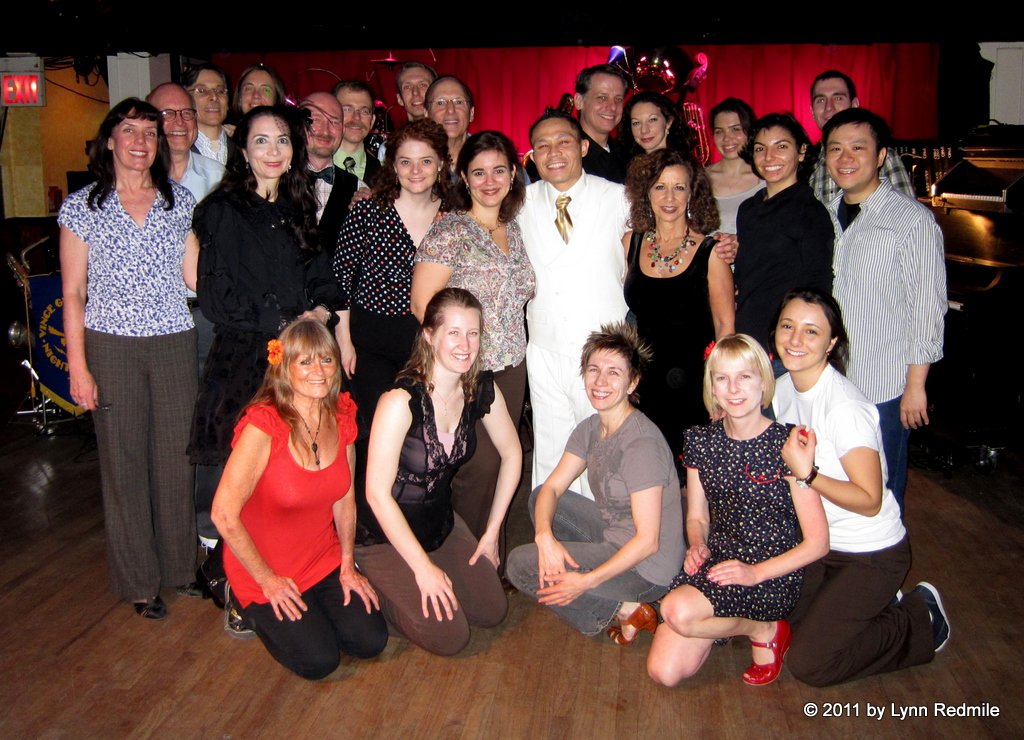 At the end of the night, we all gathered for a sweet picture in front of the bandstand.

Of course, the majority of my "Bucket List" items were food related. The highlight was an epic meal at Kuma Inn with friends Josephine, Ben, Michelle and Neal.  We had my "greatest hits" from the menu, including their perfectly crispy and tender pork belly lechon (pictured right), the tangy and buttery seared scallops, grilled whole dorado fish and the giant pork adobo buns. The food was so good, we even got the pescaterian who was with us to try some pork! Another awesome meal was breakfast at Shopsins in the Essex Market. Chef Kenny was in good form, holding court at the front of the store and yelling epithets at his chef in the kitchen in the back.  I love their mac n' cheese pancakes, so I was very excited to order the "Moe Betta" — which is a sandwich made up of two mac n' cheese pancakes with eggs and maple bacon in the middle.  Surprisingly, I finished this in one sitting!

I've already blogged about the hand pulled noodles from Lao Bei Fang in Queens.  I still dream about those noodles. A surprise meal was having ramen at Totto on West 52nd Street.  My friend Arthur took me and Josephine there after we went ice skating — the perfect meal to have after a chilly afternoon of whooshing around the rink.  Totto specializes in tender roast pork and a unique spicy oil that they put on their ramen right before serving it.  I've had a lot of amazing ramen in the city, and this is definitely in the top three.

That's me making a funny face when I'm eating something totally delicious.  Like the roast pork I just put in my mouth just as the picture was taken.

Other amazing food and drink I had in my last days in New York:

All amazing in their own ways.

It was a lot of fun fulfilling all of these Bucket List items, particularly getting to enjoy them with good friends.  While I'm going to miss all of these places and experiences in New York, I'm glad I got one last splurge to experience them all.