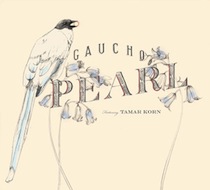 I'm still kvelling from the amazing two sets of music performed last night by the Gauchos jazz band playing with the incomparable jazz singer Tamar Korn at Amnesia Bar in the Mission.  The Gauchos always put on an amazing gig, which SF lindy hoppers and jazz heads have known about for awhile.  But with Tamar Korn from New York on vocals, they are sublime.

I got there right at 8pm, and knew it was going to be a hype evening. The place was already really packed, and I had to weave my way to the stage where the band was getting set.  It was just going to get much more crowded as the night wore on, so I quickly got a couple of dances in to some of the slower tunes.  Then Tamar started singing and the crowd went nuts.

Tamar sings in the style of a 1930s jazz diva, with a lot of vibrato, both expressive and controlled.  And she does this crazy thing with her voice mimicking different instruments that is just amazing to witness.  Watching her trade licks with the horn players is always incredible.

For the first set, we managed to keep a small space for dancing, including a really fun charleston jam for a faster number.  But by the second set, the crowd was just too dense, and there were a couple of altercations with audience members who didn't appreciate the dancing between them and the band. There's nothing more frustrating than hearing amazing live swing music and not being able to dance!

One of the funniest moments was when the bartender got on the mic to announce that someone had locked their bike to the gate of the church next door and that they needed to move it.  In any other place in the US, the guy would be yelling about someone's car, but of course who has a car in the Mission?  Gotta love SF.

So glad I caught this gig.  Wednesdays are becoming my favorite night for dancing in SF.

Tamar and the Gauchos are playing at Cafe Boronne at 1010 El Camino Real , Menlo Park, tonight, Thursday August 11. And on Friday they will be at Cafe Pascucci on 170 King St , San Francisco.  Don't miss them! But if you do, you can also bring them home by buying their album "Pearl".