As you may know, I had low expectations for "Step Up Revolution," the fourth in this series of street dance movies. The trailers I found underwhelming and disappointing. The director has never done a film before. Many of the amazing dancers from previous "Step Up" films didn't seem to be in the cast.  And it looked like the hokey-est plot ever.

That said, a couple of friends saw it and recommended it to me.  And I figured there might be a couple of worthy dance scenes, amidst the silly plot.  So I convinced a couple of dancers from my crew to go with me to see it this weekend at our local multiplex.

Overall, I must say I found "Step Up Revolution" to be entertaining, decently executed and at times even thrilling.  If you liked any of the previous "Step Up" movies, you will enjoy this one too.

Okay now to break it down.   This is a little spoiler-y, but you don't go to these movies for the plot anyway, right?

The two principal actors are Kathryn McCormick of "So You Think You Can Dance" fame, and Ryan Guzman, who, uh, has nice abs.

Kathryn is a fine contemporary dancer, has beautiful extension and lines, and is easy on the eyes.  Her acting was, by "Step Up" standards, acceptable and not distracting.  Ryan Guzman as a non-dancer fakes it well.  There's a brief shot of him freestyling by himself that won't win any dance contests, but at least makes him look like a dancer convincingly.

Most egregiously, their chemistry together was totally unbelievable to me and other people in our theater, who were loudly groaning during their lovey-dovey interludes.  Their dance-y meet-cute happened in like 45 seconds and made absolutely no sense.  And you don't have any idea why these two beautiful people are together other than they are both beautiful.

More offensive to me was how the producers of "Step Up" seem to purposely want to avoid having any people of color in the principal roles.  Would it be so horrible if a brown face starred in a freaking dance movie?

Okay, I know Ryan Guzman is part Mexican.  But you don't get any sense of his ethnicity from looking at him or from how his role is portrayed.

Okay now onto what I liked about the film.

The main dance setpieces are well shot, exciting, and entertaining.  My order of dance pieces from most to  least favorite:

I totally hated the plot when I heard about it because it sounded so freakin corny: dancers organize to stop global company from tearing down local neighborhood to make way for a luxury hotel. Blech.

But I have to say that I found the fact that this wasn't about simply a dance competition or someone reaching their potential as a dancer refreshing.  It was about dance as a form of artistic and political expression, which is something I can totally get behind.

Do I wish that the choreography and staging did a better job of communicating a profound message to the audience? Yes.  But was I excited to see bad-ass street dance being employed for a higher purpose? Absolutely. I would love to live in the world where dancers could make a difference in their community simply by dancing.  It's a beautiful fiction that I am happy to inhabit for 90 minutes or so. 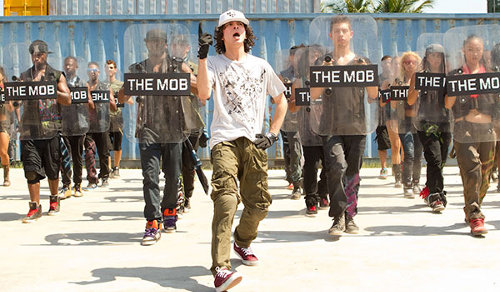 I wasn't crazy with the completely de-racialized discussion between the leads about how dancing is how "people that no one notices" get to "have a voice."  Since historically, hip-hop culture was a way for blacks and latinos in America to get noticed and have a voice, it would be nice if that was at least acknowledged. Way to appropriate social justice language for your silly entertainment, Hollywood.

And what's the next step for this newly politicized mob of dancers, now that they have thwarted the plans of the evil developer? Form a new nonprofit? Open up a community center? Occupy something? Oh yes, it's becoming part of Nike's next major marketing campaign.  <facepalm>

Totally had no impact on me whatsoever.  Don't waste your money on the 3D upsell.  See it brighter and clearer on plain old 2D.

So yeah, if you like street dance, go see "Step Up Revolution." Cause if there's no krumping, I don't want any part of your revolution. That's how that saying goes, right?