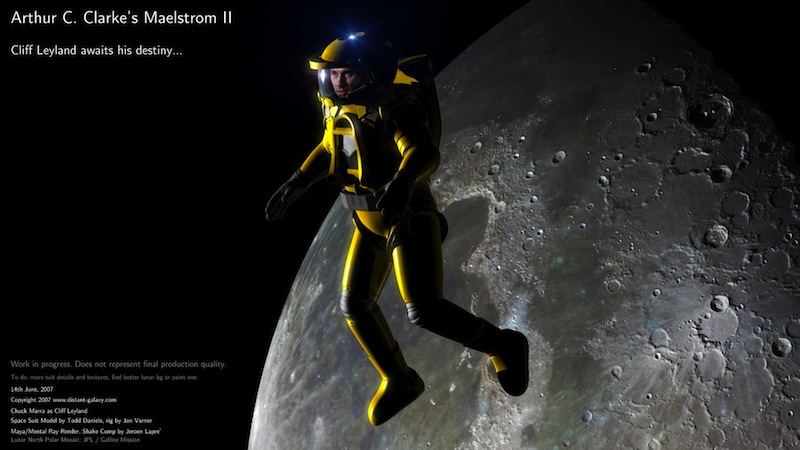 Yesterday, a group of our science teens at the Cal Academy of Sciences got to talk with Jeroen Lapre, senior technical leader in the Morrison Planetarium here.  Before Jeroen came to the Academy, he spent many years working in digital effects for the film industry, specifically Industrial Light and Magic.  He worked on such tiny, little known projects as "Star Wars" episodes 1-3.

One of the neatest parts of Jeroen's talk was his description of an independent film project that he has been working on for a long time: "Maelstrom II."  Based on a short story by Arthur C. Clarke, "Maelstrom II" tells the "near future" story of one lone technician trapped in a damaged space vehicle in a degrading orbit around the moon.

Jeroen explained to our teens that his goal was to create a science fiction short film that was based on as much actual science as possible, rather than speculation or complete fabrication.  All of the technology depicted, from the rail gun to the rescue vehicle to the water mining operation on the moon, are scientifically accurate and plausible extrapolations from current tech.  The imagery and topography of the moon is based on actual photos and data gathered about the moon.

But beyond the science, "Maelstrom II" tells a compelling, human-centered story of survival and ingenuity. Here are some work-in-progress animatics from "Maelstrom II" to give you an idea of the plot.

Clearly a labor-of-love for Lapre, I hope he gets to finish this project soon, cause I want to see how it ends!