On September 27 2008, five years ago today, the California Academy of Sciences opened it's new headquarters to the world, in the heart of San Francisco's Golden Gate Park.  I wasn't here at that time, but I heard that it was an impressive sight seeing the thousands of people lining up to get a peek at the new Academy.  Reportedly the line to get in was 1.5 miles long!  As you can see from the video, it was quite the multi-faceted celebration of the new building, with bag.jpgpers, opera singers and live butterflies.

I've been working at the Academy for two years, but I still am blown away with what an impressive achievement this institution is:

And while the building is still quite new, our legacy is quite old, dating back to 1893 when the first Academy was established.  So the Cal Academy is both very old and brand new, which is part of what makes it such an interesting place to visit and to work. 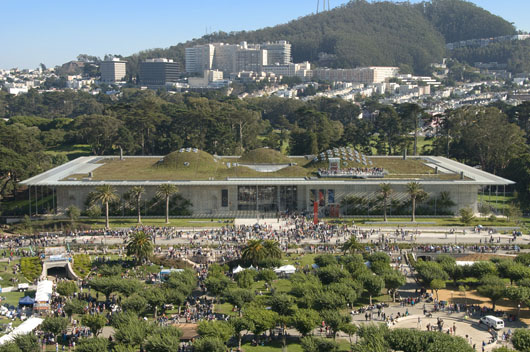