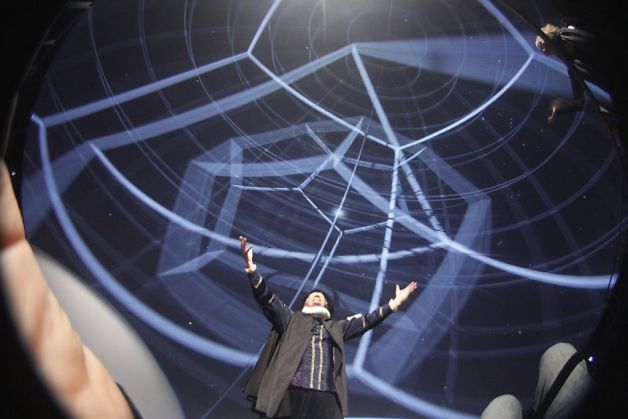 Last night I was fortunate enough to catch one of the few performances of "The Kepler Story" at the California Academy of Sciences, a one-man play about the astounding life of one of mankind's greatest astronomers Johannes Kepler.

I found the story of Kepler's many struggles as a Christian, a mathematician, astronomy and a father to be riveting from beginning to end. I can not imagine what it must have been like to be one of the few people in the world in the 1600s to see the stars and the planets as they truly are, rather than what religious dogma decreed what the structure of the universe was.  The actor Norbert Weisser did a fantastic job transporting us back to what Kepler's life might have been like, and the tumultuous times he lived and suffered through.

Beyond the performance, I was also blown away by the technical accomplishment of pulling off a theatrical production in the Cal Academy's digital dome.

The Academy is notable for a number of accomplishments, including having the world's largest all-digital projection dome in our Morrison Planetarium. At 75 feet in diameter, the dome is also an enormous challenge to use for live presentations.  How do you create visual imagery and effects projected onto the dome that don't diminish the actor but work seamlessly with his performance? Designed for viewing images projected in a darkened space, how do you light up the actor in way that doesn't detract from the projected imagery?  How do you create a soundscape that complements the voice of the actor, but doesn't overpower him?

Fortunately, we have an amazing vizualization team at the Academy, who worked with the show's producers Nina Wise and the Motion Institute to solve these problems and many more.  So the audience didn't have to think about the technical wizardry, but simply sat back and let it wash over them during the one hour performance. Watching snowflakes turn gracefully into stars, seeing the mathematical principles underlying Kepler's theories mapped out in space, walking down a street in Prague — these were some of the entrancing images that brought the story to life.

The production reminded me of the movie "Gravity," another very intimate and human story set against the black canvas of space.  But "The Kepler Story" also brought you back in time to understand both the inner turmoil and the societal upheavals that Kepler lived through. They make his enormous contributions to our understanding of the universe that much more powerful.

I love arts and science collaborations like this, and hope we can see more of these at the Academy!

The Kepler Show was written and directed by Nina Wise, produced by Motion Institute, in cooperation with the California Academy of Sciences.