Last night, I went with some friends to catch the opening weekend of the latest in the "Step Up" dance film franchise "Step Up: All In."

I've been a fan of this series since the first "Step Up" in 2006. I enjoyed "Step Up 2: The Streets," fanatically love "Step Up 3D" and was pretty entertained by "Step Up 4: Revolution." Yes, the acting is often terrible and the lines groan-worthy in these films. (No actor in the series has ever topped Channing Tatum in the first "Step Up" who ablely portrayed the underdog loser thug who was also a fantastic dancer.) But the sheer spectacle of the dancing is always impressive and inspiring for an amateur dancer like me.

I should say at the outset that my perspective on the films is colored by being a dancer (lindy hop, hip-hop and house, primarily), and a street dance fanatic. I follow the careers of my favorite b-boys and poppers the way that other people follow sports teams. I have spent more money than I care to think about on dance classes, workshops, camps, shows, and competitions around the world.

So I watch these films as both a fan and a practitioner of dance.

So let me break down my opinion on the Good, the Bad and the Worst parts of "Step Up: All In."

[WARNING: There are some things I write about that I guess are spoilers. Of course, the predictability of the plot is part of what "Step Up" fans enjoy, so nothing should be truly surprising.]

The actual dancing is of course the best thing about "Step Up: All In." The director must know that that's what you came to see, so rarely does 10 minutes go by without some kind of dance breaking out for some contrived reason. 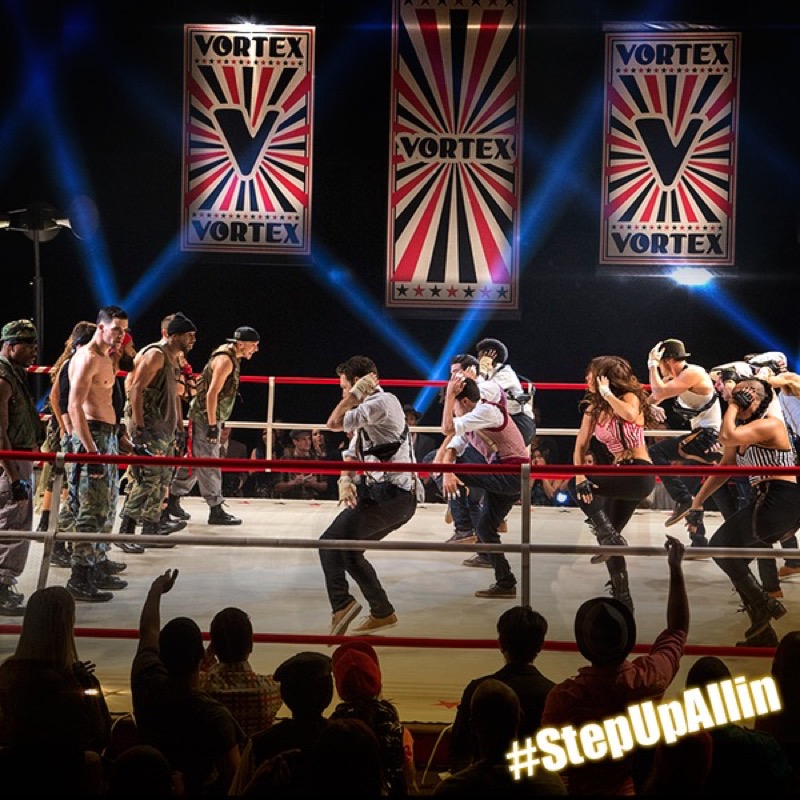 Not all of it is great. The "dance battle" between the two main characters Andie and Sean is pretty lame. And the intial battle in the LA club between the Grim Knights and the MOB is just good.

But pretty much everything else is amazing. The recording of the video by the new LMNTRIX crew is really cool looking and a fun premise as a mad scientist's lab. The semi-final battle in the boxing ring was really clever, with great costuming, dancing, tricks and attitude.  I would wear every single outfit that the LMNTRIX dancers are wearing in that scene.

The final climactic dance performances by the Grim Knights and LMNTRIX is just ridiculous. The Grim Knights brought so much swagger and aggression to their dancing I almost wanted them to win. And then LMNTRIX (with their friends) creates an incredible steampunk fantasy that had everything I could possible want in a routine all in one.

I liked the premise of the movie. The film makes a solid attempt to portray in an entertaining way what the reality is for people trying to make a living as a dancer. It's a freaking hard grind, even if you are the top of your game. There's just way too many talented dancers all vying to get the handful of paid dance roles out there.

Anyone who has ever tried out to dance in a commercial or a music video will laugh and groan at the painful and humiliating auditions that dancers have to endure. It's a lot of waiting, being forced to compromise your art, and supporting questionable products or music.

The central dilemma of the movie is, how do I get paid to do what I love. I like and appreciate that.

Overall I agree with the casting decisions. For "Step Up: All In" the producers brought back lots of fan favorites from past "Step Up"s, including "Moose" (Adam Sevani, Step Up 2 and 3), "Andie" (Briana Evigan, Step Up 2), "Sean" (Ryan Guzman, Step Up 4), "Jason" (Steven "Twitch" Boss, Step Up 3D and 4), "Thadd" (Madd Chadd, Step Up 3 and 4), and my faves the twins "Marcos and Martin Santiago" (Facundo and Martin Lombarg, Step Up 3).  Just a really smart move to appeal to the fans.

Adam Sevani gets a much more prominent role in "Step Up: All In," focusing on balancing his relationship with his girlfriend Camille, his professional career as an engineer, and his love of dance, which I'll get to in a bit. I've long thought that Adam was the most charismatic part of the "Step Up" franchise.

There are several strong, positive female characters in this film. Andie is the principled leader of the crew who values her dance "family" more than winning. She's grounded, savvy, and speaks her mind.  She's clearly gotten over the confidence issues that plagued her in "Step Up 2."

Another character who didn't have much screen time but still left an impression was newcomer "Violet" played by New Zealander Parris Goebel. She's an able, confident person and an incredible dancer. And more importantly she doesn't have a rail thin, gym trainer physique, and still kicks ass with the rest of the crew. 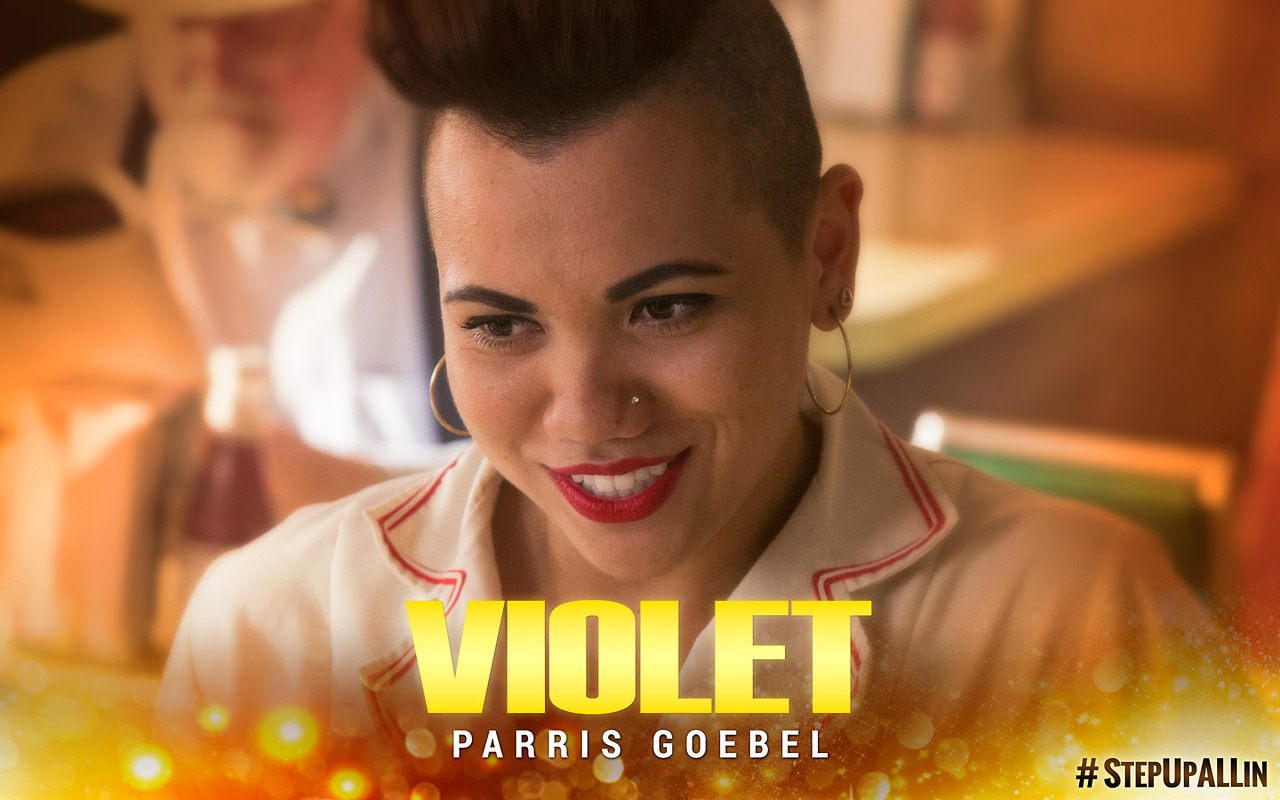 A friend who saw the movie with me said that the "bad guy" crew also had a plus-sized dancer. But I don't recall seeing her.

They also don't get much screen time, but I appreciated the older Eastern European couple who provide some much needed perspective for the younger dancers on the importance of "winning" versus supporting your friends.  There's a touching moment where the couple dances together in their living room after dinner that I really liked.

The older couple also runs a ballroom studio, which is a typical way that most dancers make a living doing what they love, by teaching. Maybe I liked this because I'm a [cough cough]-aged dancer.

Moose and Camille were best friends in "Step Up 3," who ended the movie with a kiss that was kind of tacked on after the two main characters start making out. One of the most disappointing parts of "Step Up 3" was how little screentime was devoted to the more interesting relationship of two best friends who realize they could be much more.

So it was nice to see that Moose and Camille have moved on to a more mature and stable relationship in "Step Up : All In." Moose has a real job as an electrical engineer. They have a nice apartment together in Los Angeles. Camille is devoted and supportive of her boyfriend, and knows him well enough to see that what he really wants to do (still) is dance.

They have their ups and downs and they work it out together. It's sweet and kind of how you wish your own relationship problems would get worked out.

There are lots of groan-worthy parts of "Step Up: All In" that most of the reviews I've read focus on.

So many terrible parts of the plot that caused my friends and I to literally yell at the screen. Why wouldn't the main character at least check with his old crew before putting together a new crew to enter in the dance competition? Why is Sean, who was a pretty decent guy in "Step Up 4," suddenly such a dictator and a jerk in this movie? Why does Andie fall for Sean, who is generally just horrible to her?

It's hard enough being a dancer / actor. But to have to read some of the most hackneyed lines ever put to celluloid? Meryl Streep could not deliver those lines without cracking up. My brain just stopped recording during the final "inspiring" speech by Sean to his crew.

I'm a big fan of Adam Sevani.  But his dancing in this movie is just not particularly memorable or impressive. I wish it weren't so.

Beyond just the poor choices made by the producers, the writers and director, there were some really troubling aspects of the movie that I have to mention.

The "Step Up" series seems to think that to have an onscreen romance, you need to have a man aggressively pursuing a woman, she has to initially reject him, but end up sucking face with him in the end.

The Andie and Sean relationship was just completely unbelievable and nonsensical. He literally tries to endanger her by attempting to force her to do a move that she has already told him is dangerous and that she doesn't want to do. And yet he still in the end (1) gets her to do the move, and (2) gets to make out with her. WTF.

Also troubling was the way that the rakish Chad pursued the sarcastic Violet with cheesy come-ons and innuendos, and then wins her over in the end. There was literally zero reason for Violet to choose him from among the many other characters she could have ended up with.

The franchise, now in its FIFTH installment, can't seem to figure out how to cast a non-white lead actor. Okay, Ryan Guzman is latino, but he is quite fair complexioned. How hard is it to find an African-american or Asian or Middle-eastern actor to play the lead? There are certainly enough insanely talented street dancers out there who are people of color. CAST ONE, Hollywood. (Harry Shum, Jr., for example, would be AMAZING.)

The "Step Up" series badly needs some queer characters. Gay people have been kicking ass as street dancers forever, creating their own unique sub-cultures and forms that are now generally recognized and celebrated, from vogueing to house.

In sum, there were some parts of "Step Up: All In" that annoyed me, some that pissed me off, but a lot that really delighted me. If you want to see some of the best street dancers in the world kick ass on the big screen, see this movie. And if the 3d glasses don't make you nauseous, I might even encourage you to see it in 3D.

Because honestly, seeing the poor attendance in the theater I and my friend's were in does not give me a lot of confidence in the future of this franchise.