On my last day in the Philippines, I was hot, tired, and not up for any long excursions. So I decided to go… to the mall.

The SM Mall of Asia to be exact, the third largest in all of the Philippines at 390,193 m² and 1,000+ shops. It's second only to the SM Megamall for the biggest mall in Manila. The SM Mall of Asia includes it's own bowling alley, multiplex with an IMAX theater, a science center, music hall, and even an olympic-size ice skating rink.

Shopping and commerce had not been a part of my trip at all, so this was actually a refreshing change of pace for me.

I spent a good part of the day just in the SM "Hypermarket", which I guess is even bigger than a supermarket. It's pretty damn huge, which you can see from comparing to the entire mall on the map. 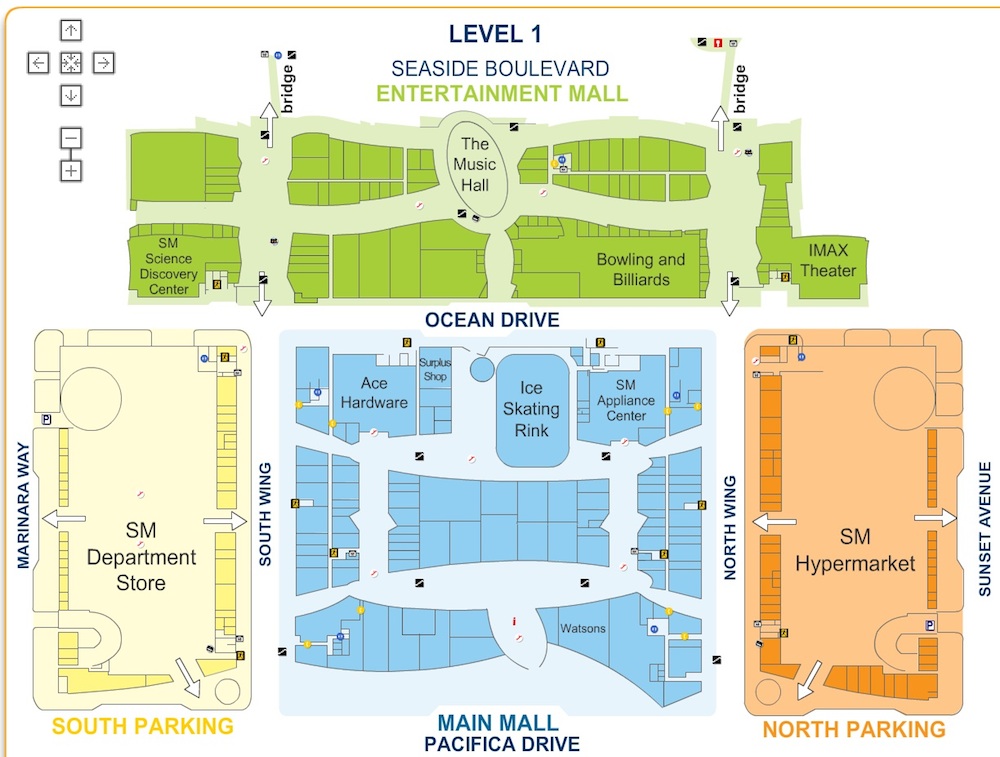 The Hypermarket was a lot of fun to explore. They had a lot of the sections you would expect in a large market, and a few that were unique to the Philippines.

These entire two racks for example, were taken up by different brands and styles of bagoong, or fermented shrimp paste.

Another section was filled with two shelves full of chicharrones, or fried pig skin.

There were about a dozen varieties of rice for sale in these large bins. Not sure that brown rice was one of the varieties.

There were an alarming variety of skin whitening creams, soaps and treatments also for sale. Filipinos really prize paleness.

I finally left the hypermarket and headed to the mall proper. On the positive note, I noticed in the mall a number of recycling bins placed all over. It's nice to see awareness of the value of recycling has reached the Philippines. I wonder how long that has been in place?

There were seemingly hundreds of different food options. None of them had a stranger name than this restaurant though.  I never got the story behind the name. But of course, those letters don't have any other connotation here in the Philippines.

The ice skating rink was interesting to watch. While there weren't many Filipinos who knew much about ice skating, there were a couple of young girls practicing spins and jumps. And this gentleman just took the cake for style and coolness.

Here's a timelapse I shot of the ice rink.

Probably the best find in the mall for me was this fancy coffee spot called "Bo's" that featured Filipino-grown beans, sold at Western prices. I had to try a pour-over that cost close to what I would pay in San Francisco. The beans came from the Benguet region of Northern Luzon and were sweet and robust. After downing my coffee, I bought a pound to take home.

Another great find was Breadtalk, an Asian style bakery where you get a tray and pick what you want from bins displaying different baked goods. I wasn't very hungry, but I had to try these two hilarious buns.

The sad piggy bun was filled with pork sisig, appropriately. And the baby had, of course, melted chocolate inside.

Such a tasty baby!

Overall, I enjoyed my trip to the Mall of Asia, saw some interesting sights, ate and drank lots of tasty things, and got some neat souvenirs and presents for friends and family.  There was a lot I didn't get to see in the Mall of Asia, despite being there for several hours. I never even got to the bayside promenade, which is supposed to be quite lovely.

But my arms full of shopping bags and my tired feet were telling me to head back to the hotel, to prepare for the long flights back home.