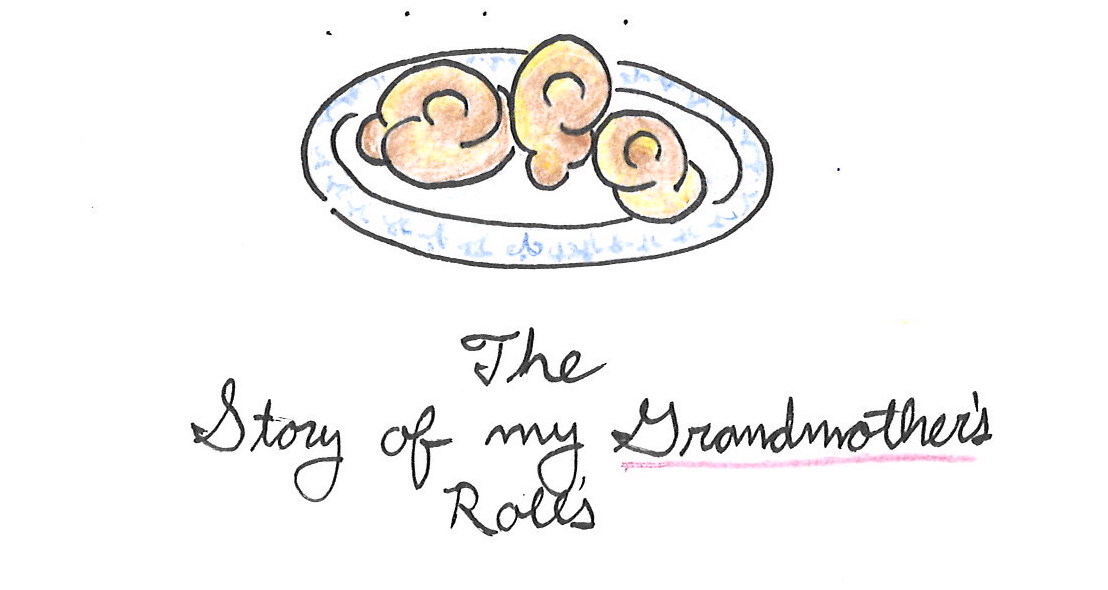 For my birthday this year, I decided to request my friends to send me personal stories about food. I’m so impressed with the stories that people shared! Here are some of my favorites. 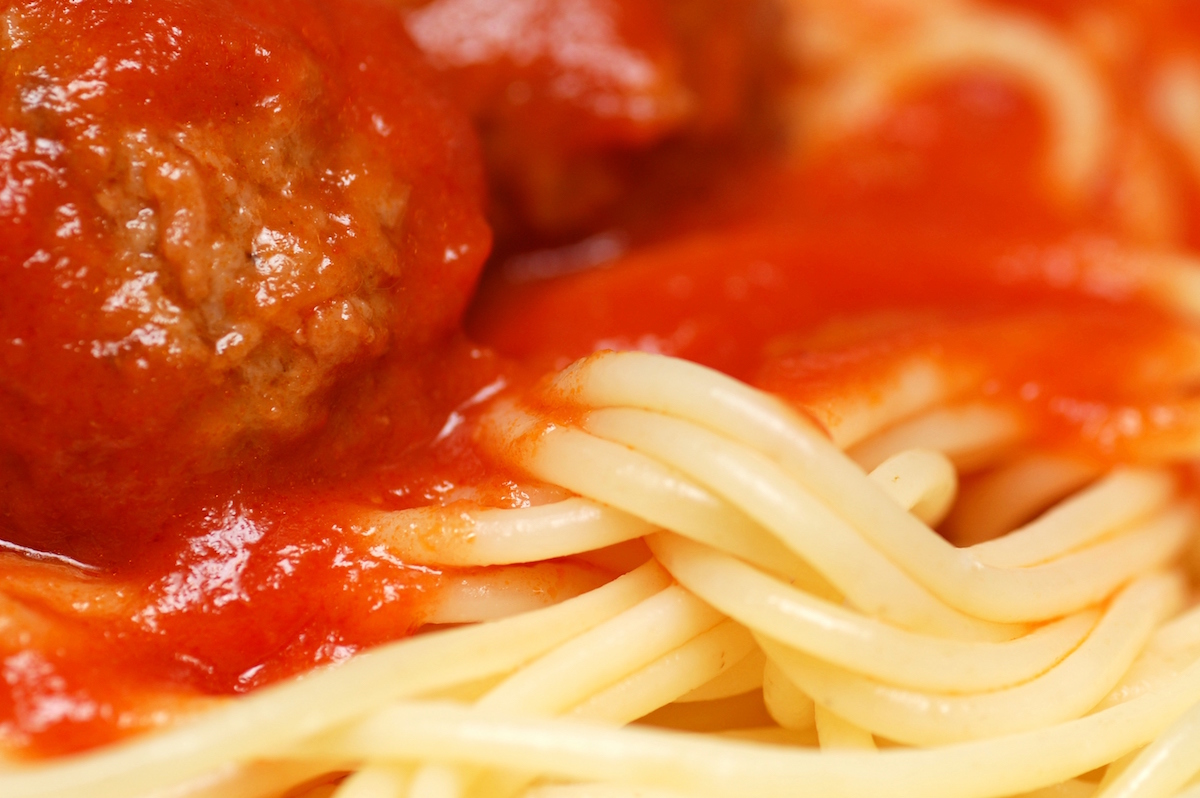 Homemade spaghetti came up a couple of times in friend's stories. My friend Jim recounts how much his mom’s spaghetti meant to him:

I haven't had my mom's cooking in nearly a quarter century. She was never a great cook (by her own admission), but I loved her spaghetti and meatballs, and the sauce somehow managed to get even tastier after every freeze of the leftovers. Every time Jasmine makes spaghetti and meat sauce (and she's an excellent cook), I feel a little pang of love, and a little connection to my mom.

My sister Cori shared a familiar story about the spaghetti that our mother makes:

The one memory that sticks out for me is being on vacation as a kid, I was probably 9 and we must have had a long day at the beach. I vividly remember showering all the sand and sunblock away, putting on my pajamas and coming down to sit at the table and eat moms spaghetti.. And it was so yummy and warm and just filled with love and comfort. Buttery over cooked noodles, greasy tomato sauce with chunks of ground beef and onions and that special spaghetti packet she uses drizzled into the sauce. To this day, I love love love whenever I get a chance to shower and change into my pajamas and sit down to eat dinner because it reminds me of this night and I love love love moms special spaghetti.

YES! It’s been so many years, but I can still taste the greasy, carb-y goodness of it.

Similarly, Carole shared a story about her mother’s noodles, and the long process involved in making them:

My mother didn't enjoy cooking, but she did pretty well considering. One thing I loved was when she and grandma (her mother) made German noodles. Grandma didn't use a bowl. She broke eggs into a shallow dent she made in the center of a mound of floor, added a little water as she went, and somehow kneaded the dough together from there with her hands. Then she and mother would roll out the dough in rounds, like piecrust. Then they would drape those rounds on clean tea towels over every possible place in the house—on the backs of chairs and over the shower rod in the bathroom! I wish I knew how long those rounds hung to dry (at least a couple of hours, I think), but when grandma deemed they were ready, she and Mother would carefully set them on the table, roll them up in a cylinder and slice them. Then they'd put the sliced noodles in a big bowl and I was allowed to uncurl them by tossing them very gently with my hands. Most of the noodles would be boiled. But some were reserved for frying in butter. I liked those best! Mother would serve the boiled noodles with the fried ones on top with her pot roast. I tried to learn from Mother how to do it, but I lived alone and it was hard to keep myself motivated in the cooking-for-one department.

I can totally relate to the frustration of not being able to replicate a homemade dish because of the enormous effort and proportions of food involved! 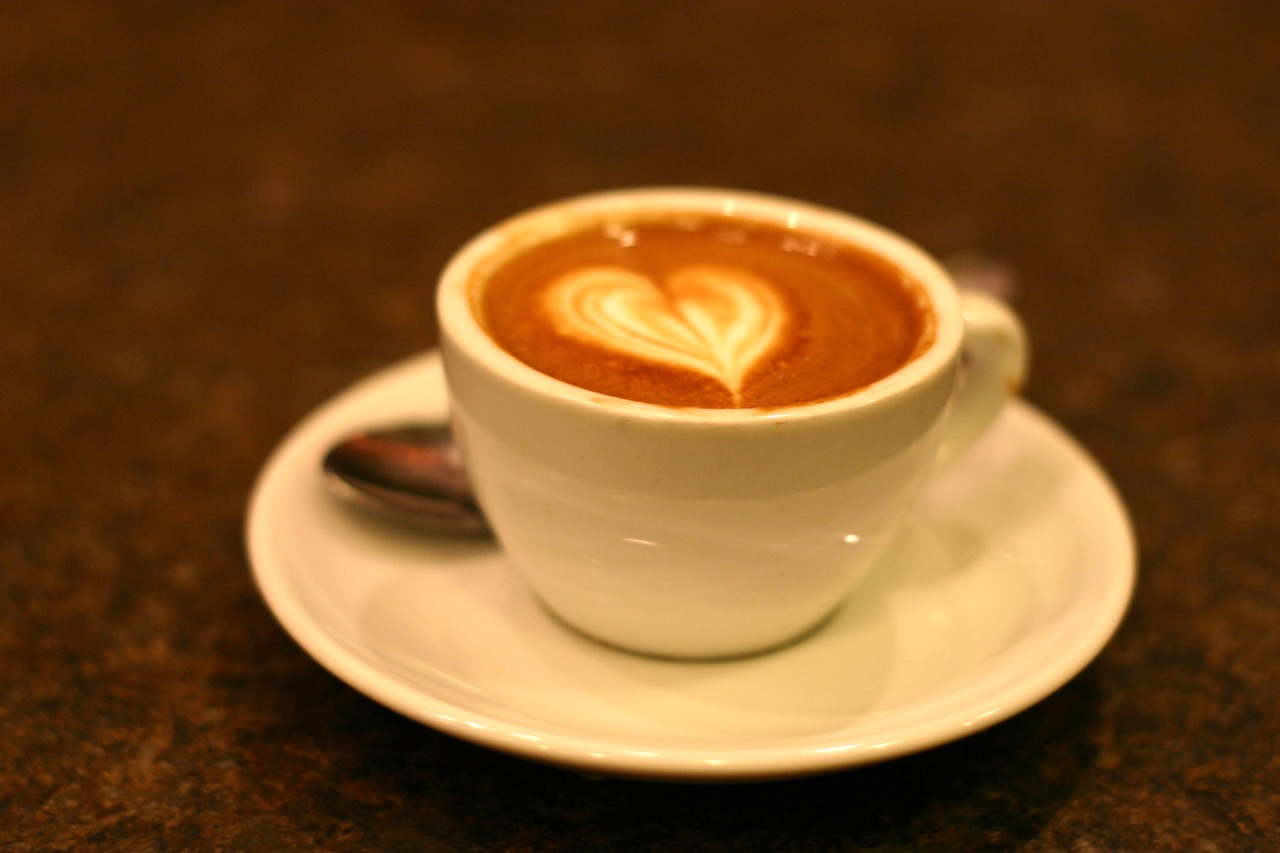 Several people shared unexpectedly awesome meals they had while traveling. The simplest but still poignant meal was just a coffee and a croissant that Michael recounted:

One of my favorite food memories, perhaps not just for the taste but for the surprise of it all, was when I took a night train into Rome. The conductor woke me up about an hour before arrival as is normal. But he also brought me breakfast of a croissant, fruit, juice…and a freshly made espresso. On. The. Train. I guess I shouldn't be surprised that Italians have a proper espresso machine on a train– I looked for it later on and saw it in the conductor's room. To this day it's still one of the best espresso shots I've ever had.

I can totally taste that espresso and croissant!

My friend Heather, one of the most well-travelled people I know, shares an old story of her and her partner Pip traveling in Africa:

1999. Pip and I were on a short jaunt from Nairobi, where we were working with the UN, to Lamu, a tiny town on the Kenyan coast built by Arab traders. We were propositioned for dinner chez Ali Yummy for Your Tummy, a fat local who rubbed his immense belly whilst cajoling us to come and eat at his house. What the hell, we thought.

Later that night, we ate — with our hands — course after course of local food, some good (langoustines!), some bad or forgettable, sitting crosslegged on the floor of his tiny house while his wive (wives?) and daughters squat in front of small grills just outside the door. There was a bizarre musical interlude by his family, and the entire thing teetered between fantastic and awkward as hell, but it is one of the most memorable meals I've ever had, and a lesson to overcome fear of the unknown and just jump right in.

Claire shared a more recent story of traveling in the Czech Republic just a couple weeks ago:

Our first night in Prague last week we had dinner at a friend of the family's house. She made traditional Czech food: both potato and bread dumplings, roast pork, and cabbage. My grandmother passed away in '99, but it felt like eating her food again. And then she brought out dessert, which was a cake that my grandmother made us every year when we went out to visit her. I don't usually feel very connected to the Czech side of my heritage, but this was a good reminder that yes, this is part of who I am.

I've definitely had that moment of feeling disconnected from my own ethnic roots until I shared a local meal in the Philippines.

My dear friend Hanah wins all the things for creating this beautifully illustrated, hand-written card for me, recounting how her nana would make Russian rolls for the family. Enjoy! 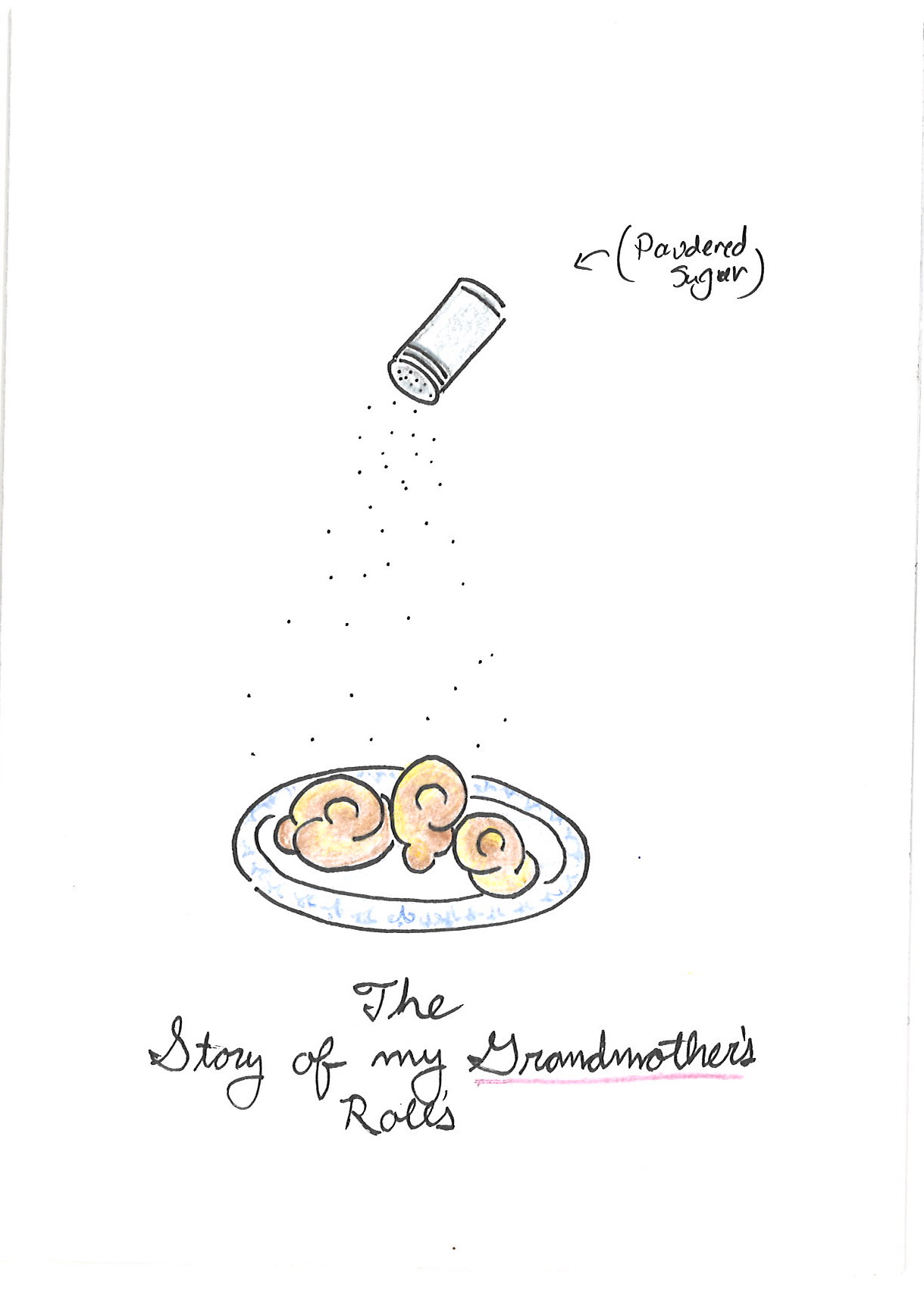 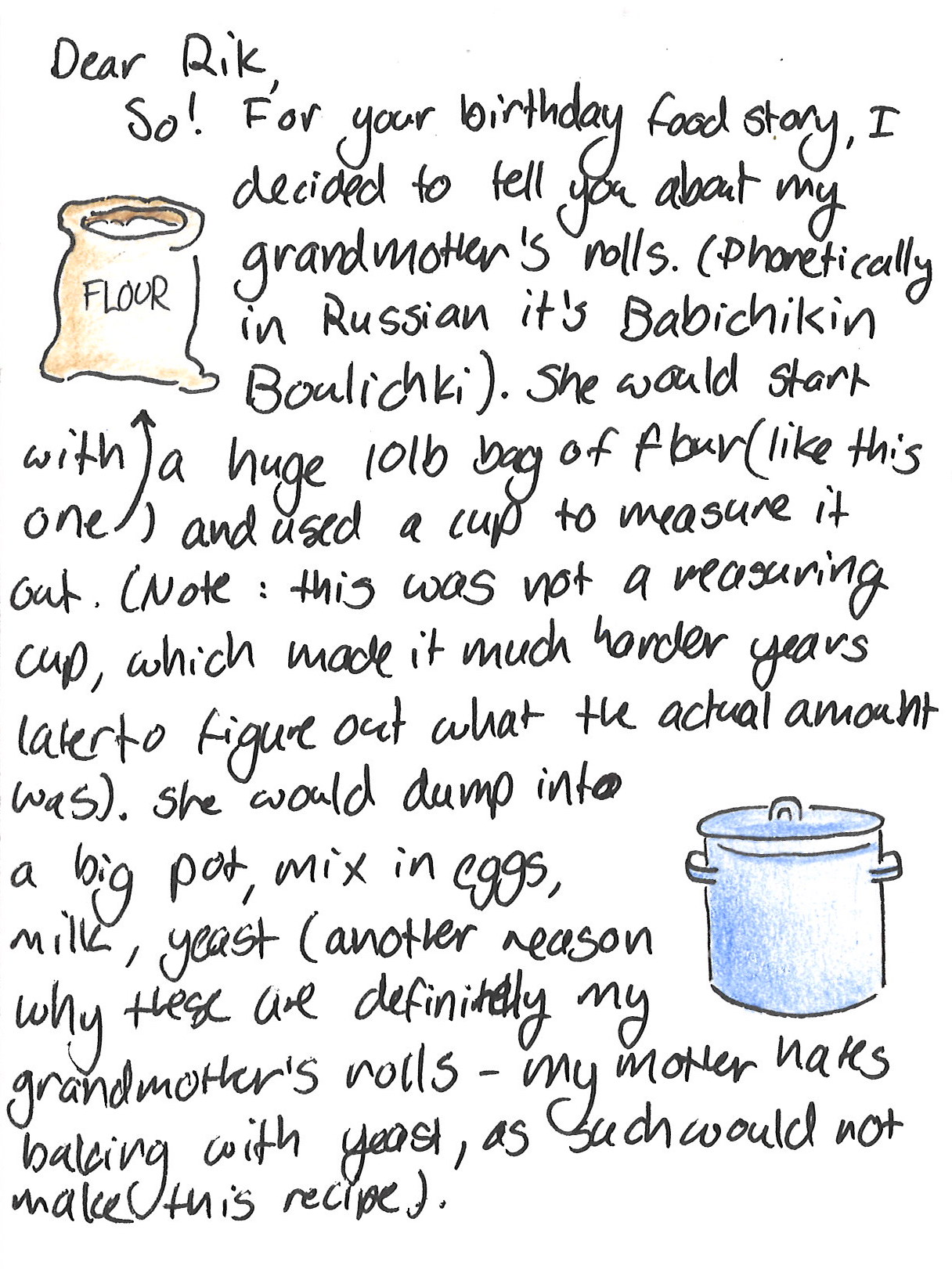 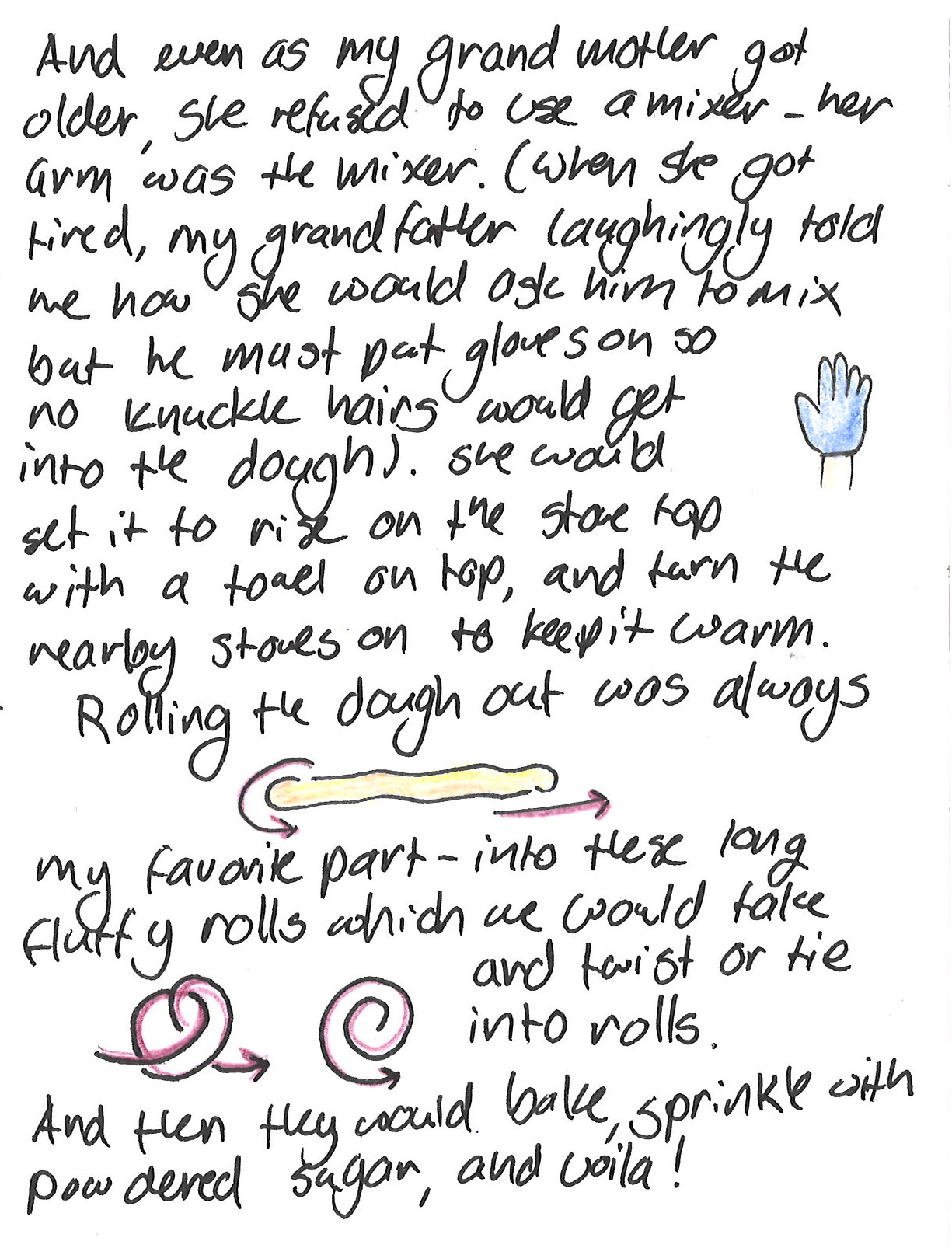 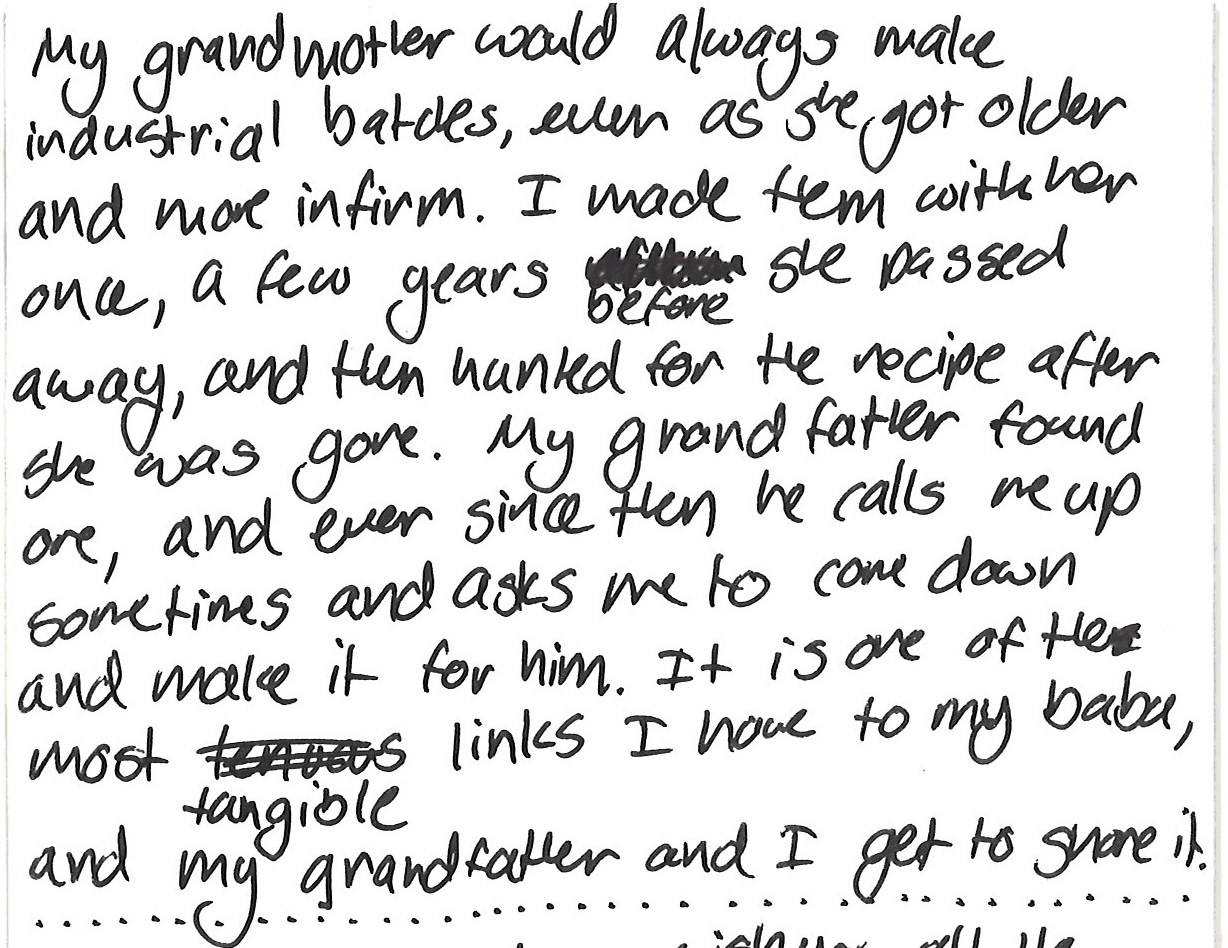 Thanks, everyone for sharing your wonderful, personal, touching food stories with me! They are the best presents I could hope for.

Read more on the original blog post that instigated this here. Now go out and have some foodie adventures!