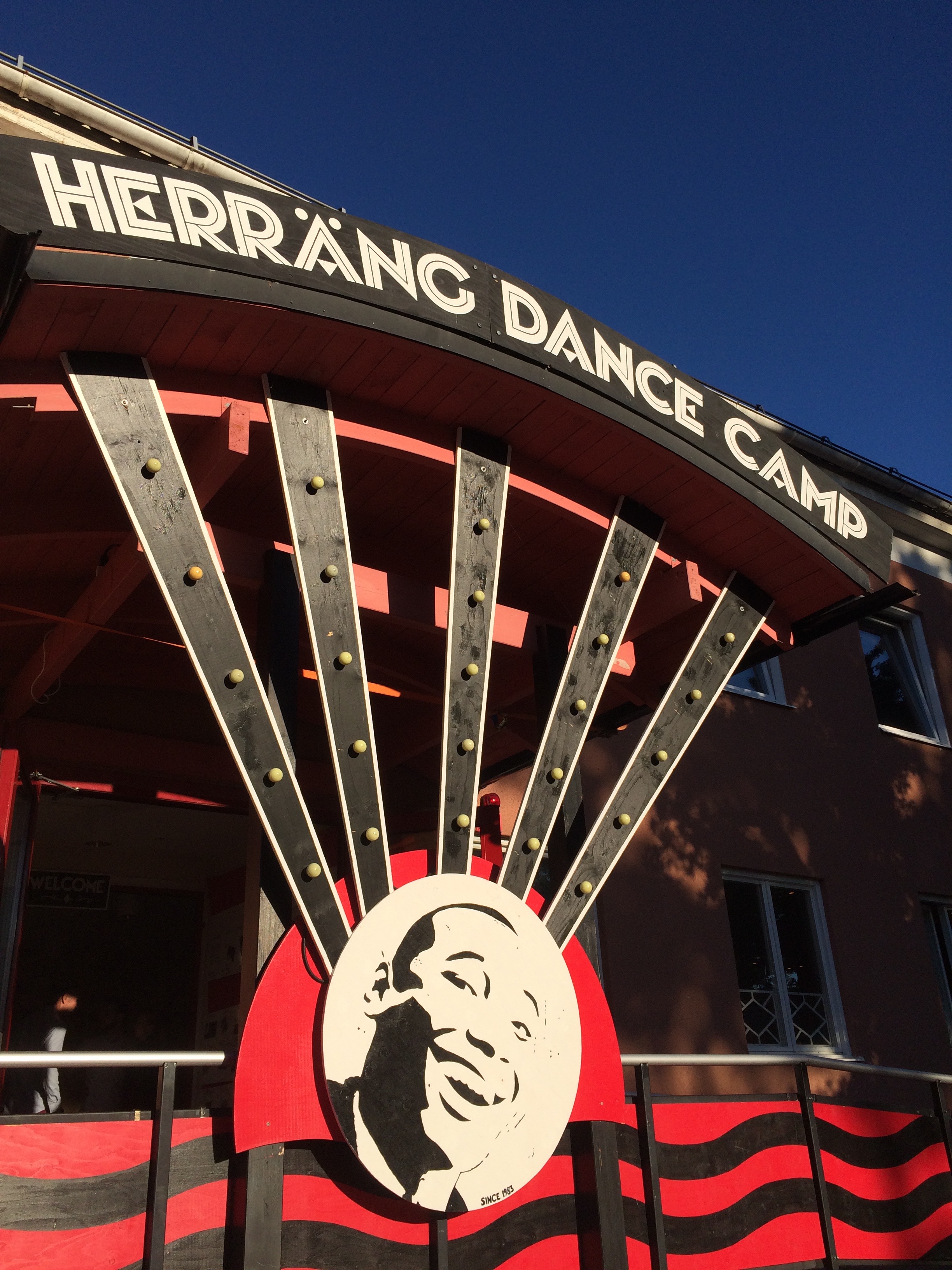 I’ve been at the Herrang International Dance Camp — “The Home of the Happiest Feet” — for the past week and a half, along with hundreds of lindy hoppers from all over the world. It’s billed as the “most comprehensive and exciting dance camp focusing on African-American jazz dances from the Golden Era of jazz.” Or more colloquially, it’s been called as the “Burning Man of Lindy Hop.”

It’s been five years since I’ve been to Herrang, which as someone who spends a large portion of his waking hours dancing lindy hop, seems like an unacceptably long time. The stars aligned for me to attend this year, thankfully, although for less than the two weeks that I think is the minimum to truly appreciate as much as the camp has to offer.

Here’s some of my highlights from the past week and a half in Herrang.

The evening and late-night / early morning dances in Herrang are legendary. Lindy hoppers come from all over the world to dance in that famous ballroom, “dancebana”, and library dance floors. Starting after the daily Camp Meeting at 9pm, the dancing typically doesn’t stop until breakfast starts in the morning at 8am, and sometimes goes even later!

There are no spectators — everyone is there to social dance. I have had some of the most amazing dances both with seasoned professional lindy hoppers as well as with enthusiastic newcomers to the dance.

The DJed music is top notch, with a DJ coordinator ensuring that the focus is on swing era music. No Top 40, neo-swing, electro-swing, “groove” or contemporary jazz is played on the main dance floors, with the exception of special theme nights in the Library. 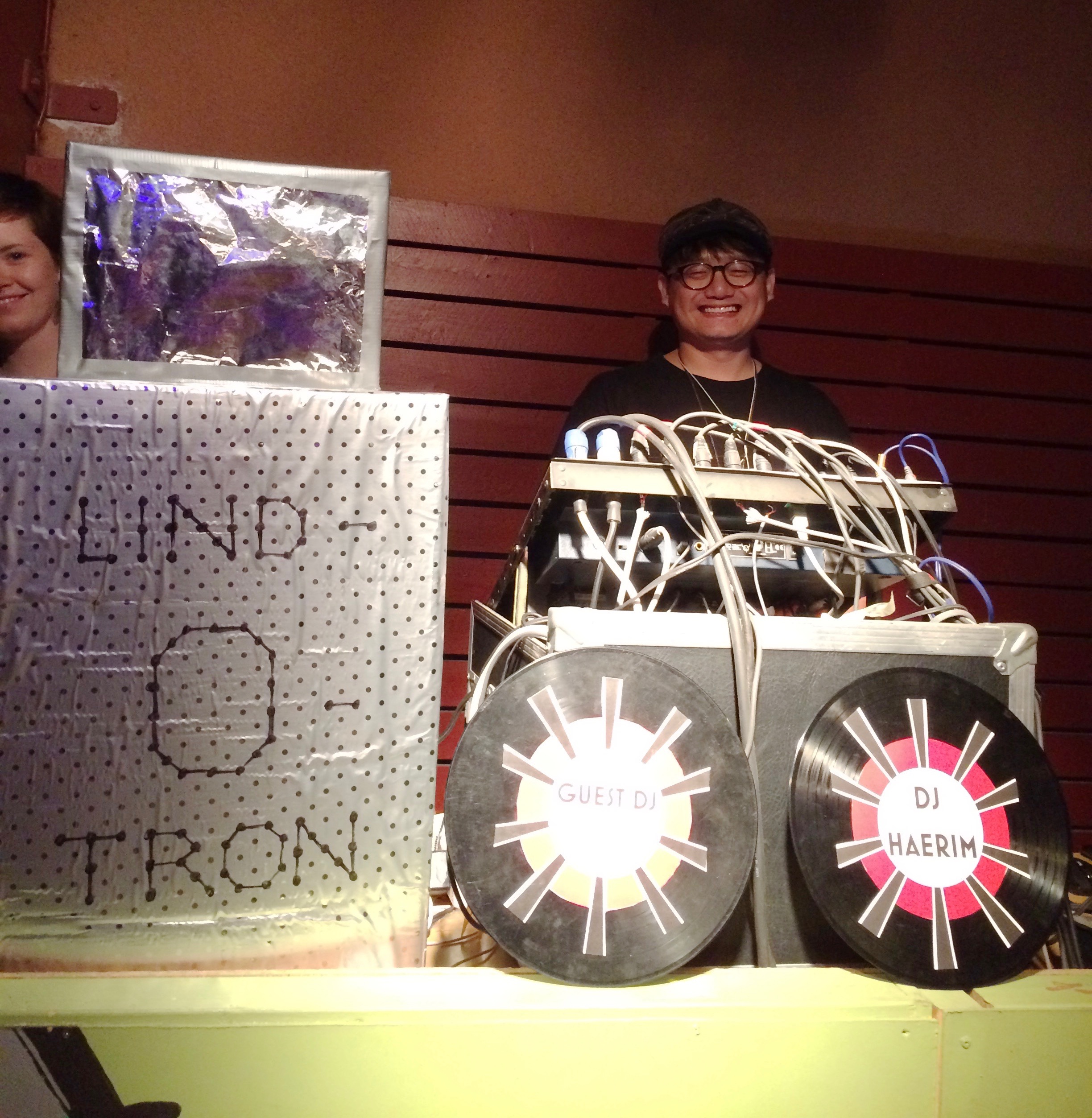 The live bands are wonderful as well. We had the Stockholm All-stars, a Swedish quintet, and a cool bebop group play for dancers while I was there. All of them were a top-notch, and a nice contrast to the DJed music. 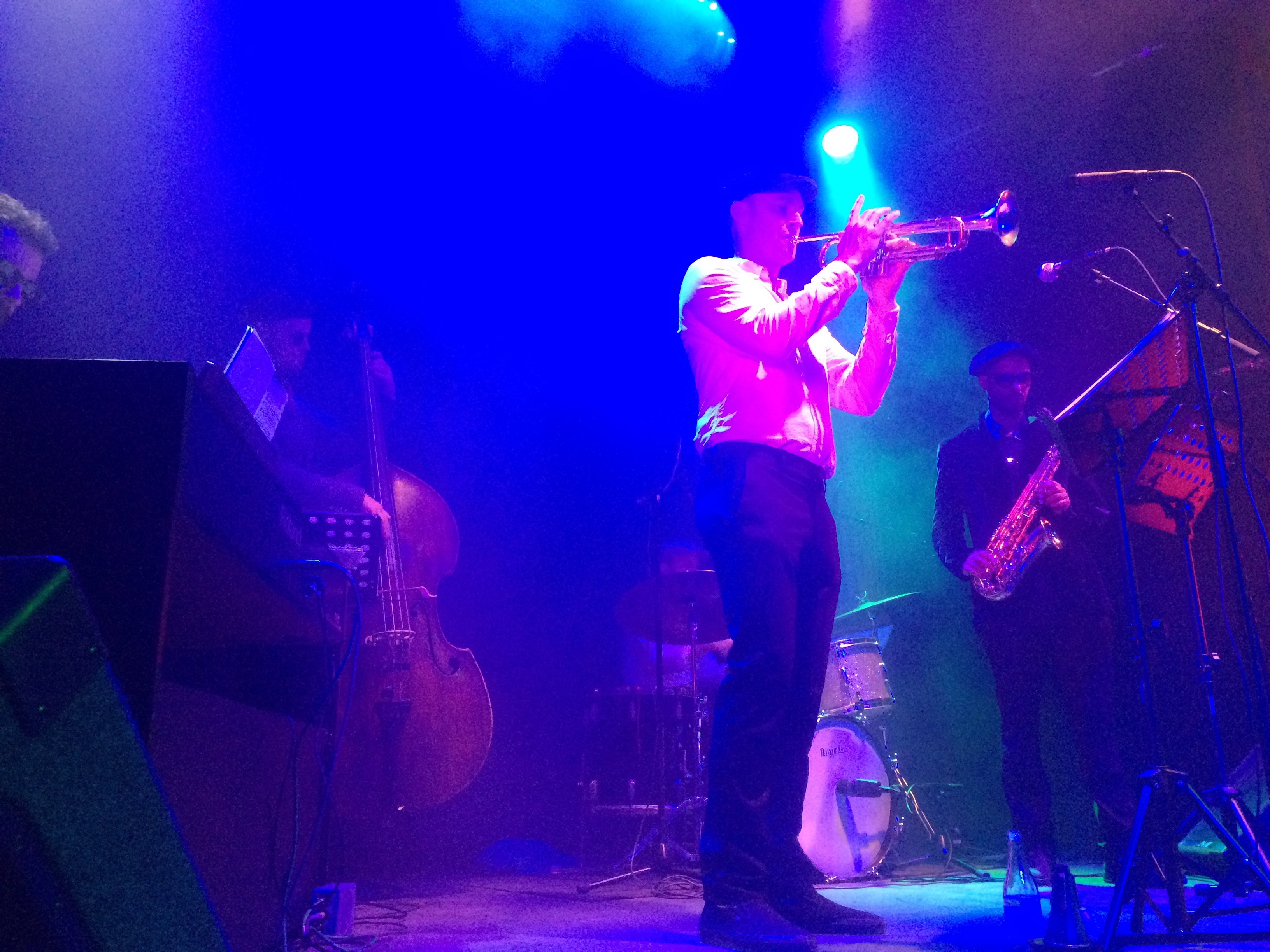 Dance jams are a typical part of the Herrang experience. This visit, I participated in a lot more jams than in the past, which is both a testament to my increasing confidence in my own dancing and what seemed to me to be a much friendlier vibe around the jams. It wasn’t just the same 3-4 “rock star” dance couples who went in, it was a wide variety of folks, doing a variety of dance styles.

There are lots of opportunity to just hang and chat with people in Herrang. Which is good, since I wasn’t taking classes this time around, and I frankly wondered what I was going to do with all my time that I wasn’t on the dance floor. I spent many lovely hours hanging out in the ice cream parlor, the Blue Moon cafe, the main bar, and the front of the Folkets Hus, just chatting with friends and strangers.

I had some amazing and fun chats with Palestinian, Chinese, Taiwanese, Congolese, and Argentinian dancers, all of whom share the same passion for jazz and lindy hop that I do. As many years as I’ve done this, it always blows me away how much swing unites people.

There’s a strong emphasis on personal connection, versus electronic communications and devices. The Folkets Hus area is largely a device-free zone. And you generally don’t see people staring at their phones during meals and down times, which is kind of amazing in this day and age.

I wondered how well I would adjust to the lack of social media stimulation. But it wasn’t too hard after a day of adjustment. I could stop by the internet zone, which is around the school area, if I needed a social network fix, which I did about once a day.

It’s an amazing environment around Herrang, just walking around the small village and seeing all of the dancers doing their thing. At any particular moment, a tap jam might be going on between a small group on the dancebana, musicians might be noodling around on instruments in the ice cream parlor, a variety of classes are happening in the dance tents all around the camp, a couple might be practicing an airstep on the grass, an old timer might be holding court on what it was like back in the day in the cafe.

While I didn’t take regular classes, there are free “taster” classes in the evenings that I took advantage of. Manu taught a super fun 70s era line dance called the “Bus Stop” that several of us learned and performed at the Camp Meeting. My friend Tasha Barnes taught a packed house dance intro for 50 or so people. And Rob from the US taught a Chicago Footwork taster that was super fun and sweaty.

There are lots of opportunities to show off in Herrang. There is a weekly “Amateur Vaudeville” night where anyone can put on a short of act of any kind. My friend Tasha Barnes did a dope house dance performance at a couple of the nights that blew everyone away.

Here’s my friend Mirjam along with Minou Ericson and Anne Normann doing a fierce solo jazz number during Amateur Night.

I did fine in the first solo jazz comp, but was eliminated in one of the middle heats. My friend Tasha ended up winning that one spectacularly. 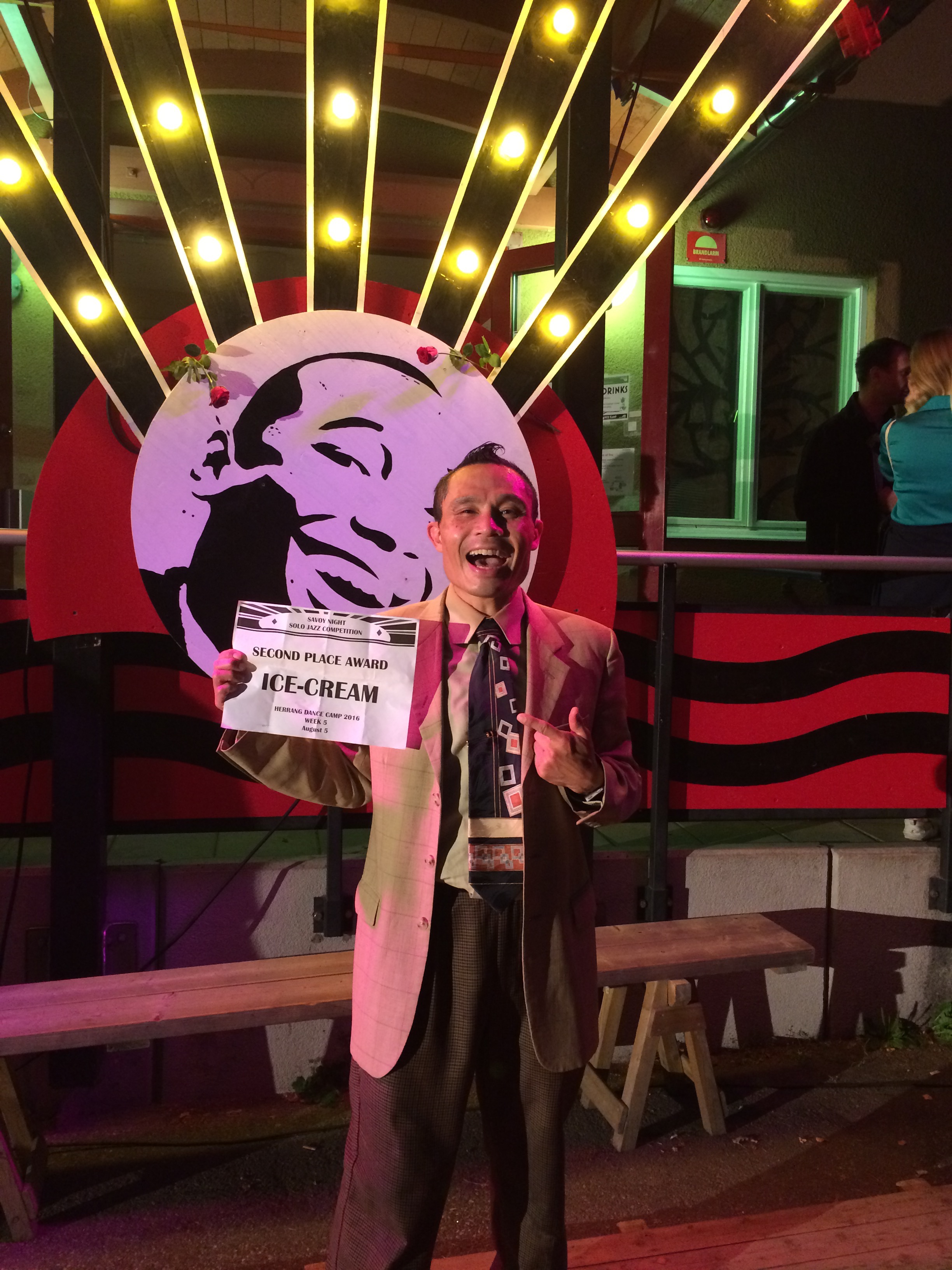 One of the best parts of being in Herrang is getting to hang out with some of the pioneers of lindy hop, that the camp brings out every year to inspire and teach us. This time around there weren’t as many old-timers there as in the past, with both Dawn Hampton and Chazz Young not able to participate because of health issues. But both Norma Miller and Chester Whitmore were very visible, active presences during the camp while I was there.

I had some of my favorite moments just sitting around and chatting with Chester and Norma about dancing, life, and anything under the sun. Chester told an amazing story of the time he got kicked off of the TV show “Soul Train” by Don Cornelius himself! And Norma is always hilariously and loudly opinionated about everything, which used to enervate me, but now I’ve grown to appreciate. Norma also seems much more generous and gracious than in the past, more of an elder statesperson of the dance than just a cranky old Black lady. Perhaps that is what age does to a person.

We were able to Skype in Dawn for one of the Camp Meetings, which was really lovely. Not as good as having her in person, but still very touching seeing her. 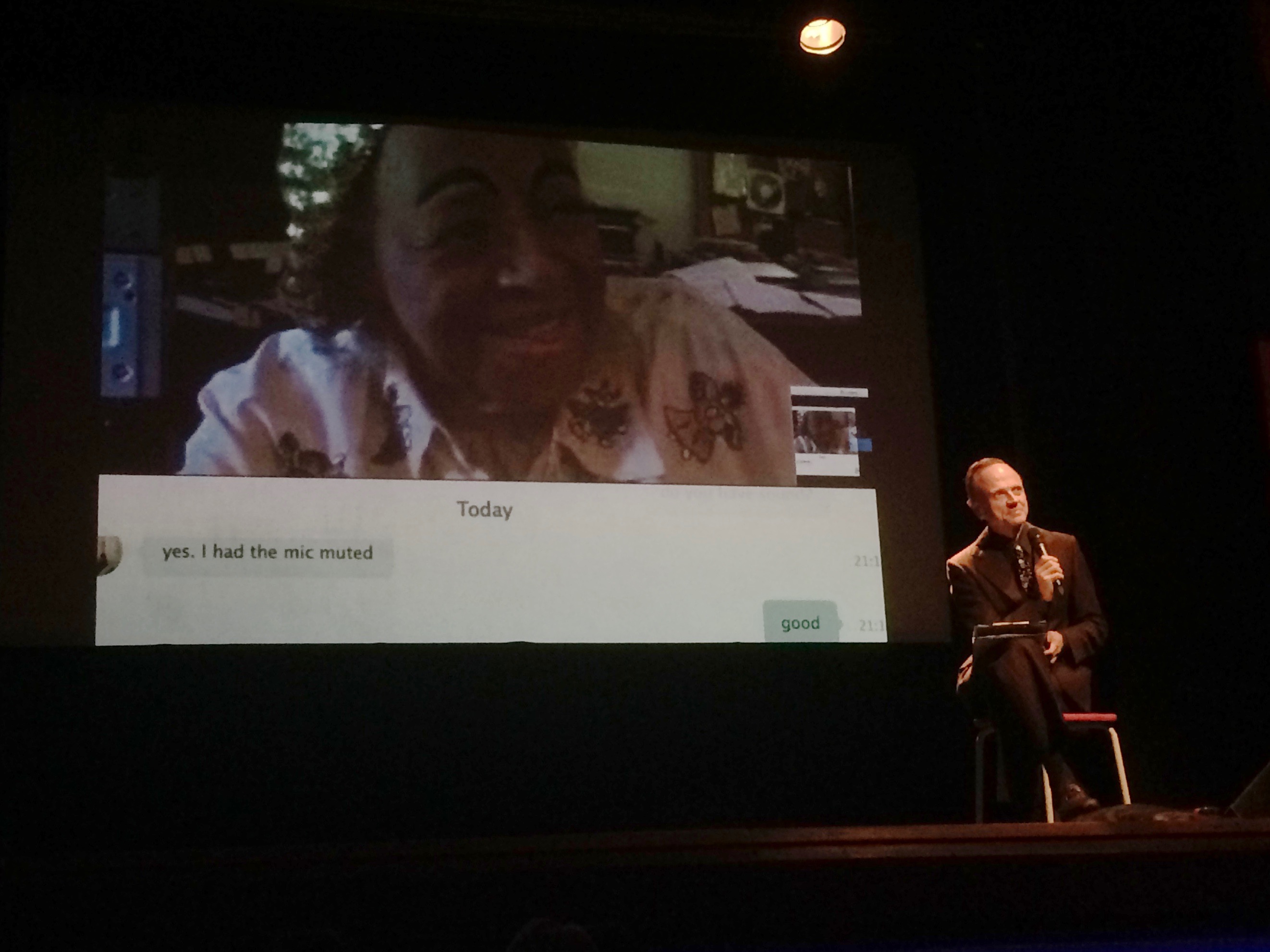 The food in Herrang is actually pretty tasty and affordable. I took most of my meals in the Blue Moon Cafe and the main bar, which had the same kitchen and menu for the most part.

Breakfast in the bar was an open selection of breads, hard-boiled eggs, sandwich meats, cheese, yogurt, and cereal. Not my preferred hot breakfast, but filling and cheap at 50 Swedish Krona (about $6). 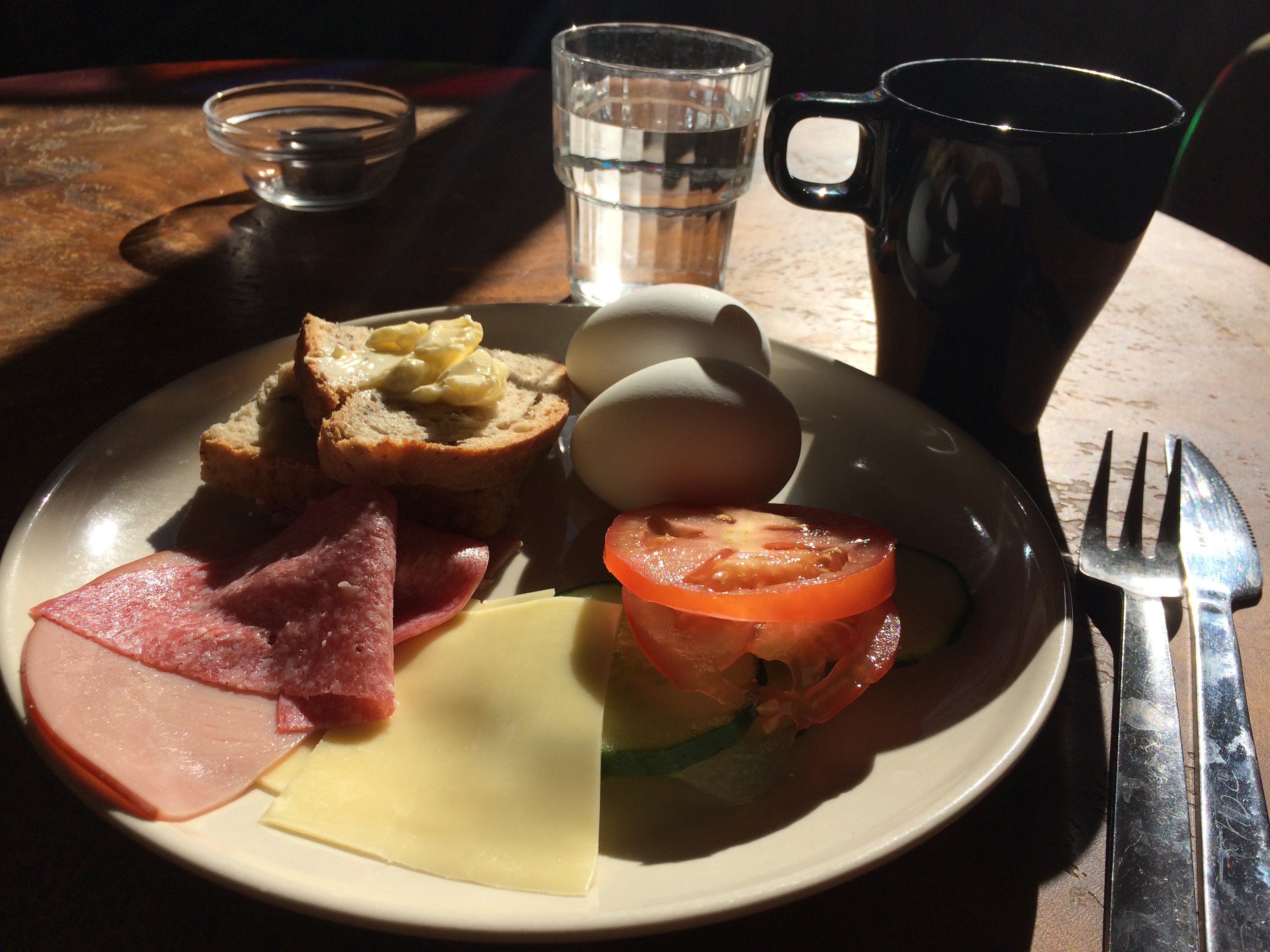 The lunchtime and dinner selections include a daily quiche, roasted chicken over rice, soup, and a veggie option. Nachos were popular and cheap, being eaten at all hours of the day.

Other options for food in the camp are “Heavens Kitchen,” the camp cafeteria that you can purchase a meal card for. Apparently it’s gotten really good in the past years, but I never visited it. Down the road a bit is a local hamburger kiosk that I used to love to visit back in the day. Now that it isn’t run by the lovely Ethiopian family that I used to hang out with, it’s a lot less appealing, and I only took one meal there.

There’s also a couple of food stalls that are new to me: a Thai food truck outside the “Kuggen” grocery, a tiny hamburger stand next to it, and a pizza shack across from the dancebana.

I did my best to avoid the sweets. But on my cheat days I sampled the famous ice cream parlor banana bread, my favorite Swedish ice cream flavor “saltlakrits” (salty licorice), and the wonderful Swedish pancakes which are only served on Thursdays, as is customary in Sweden and other parts of Scandinavia. 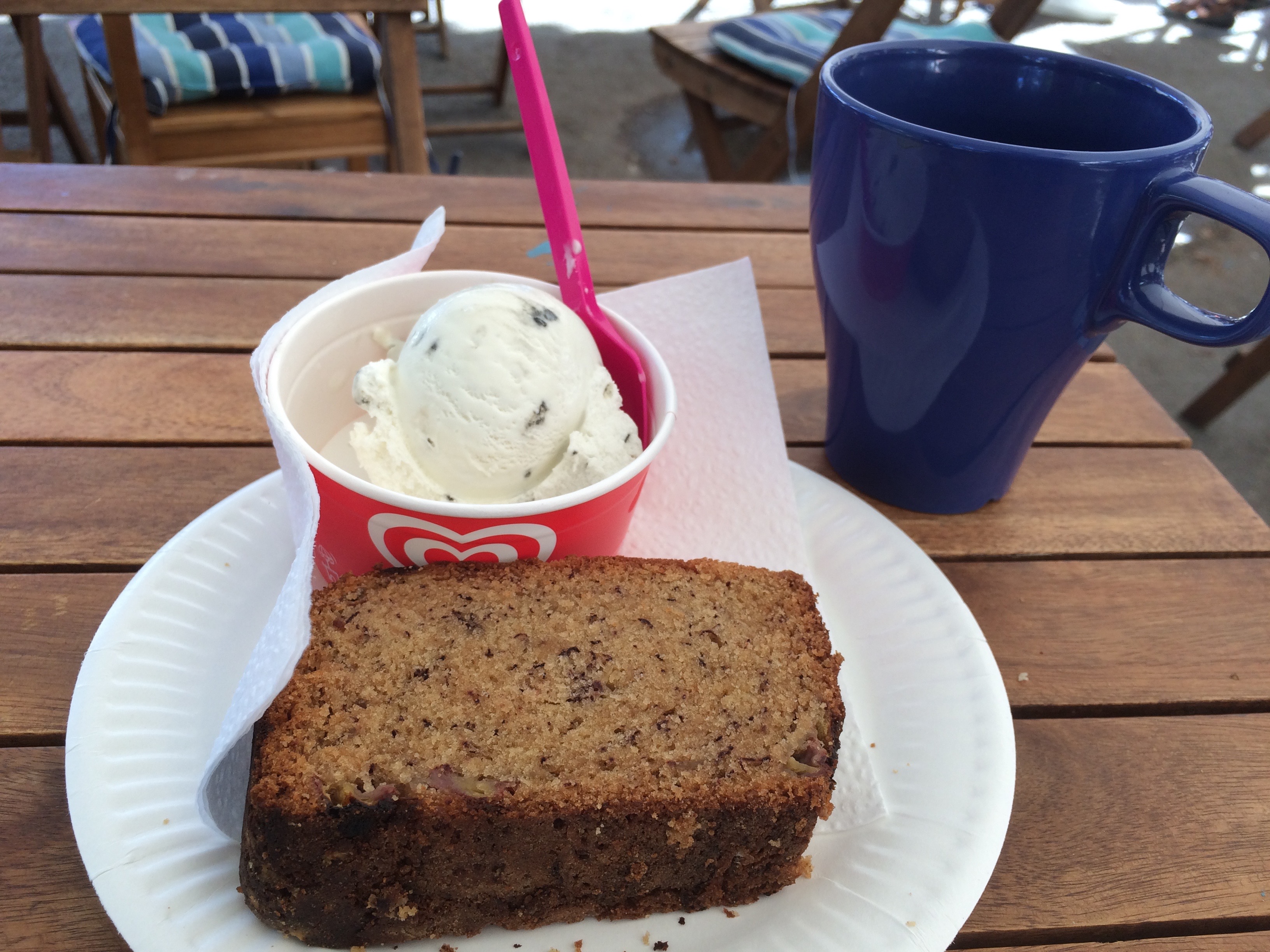 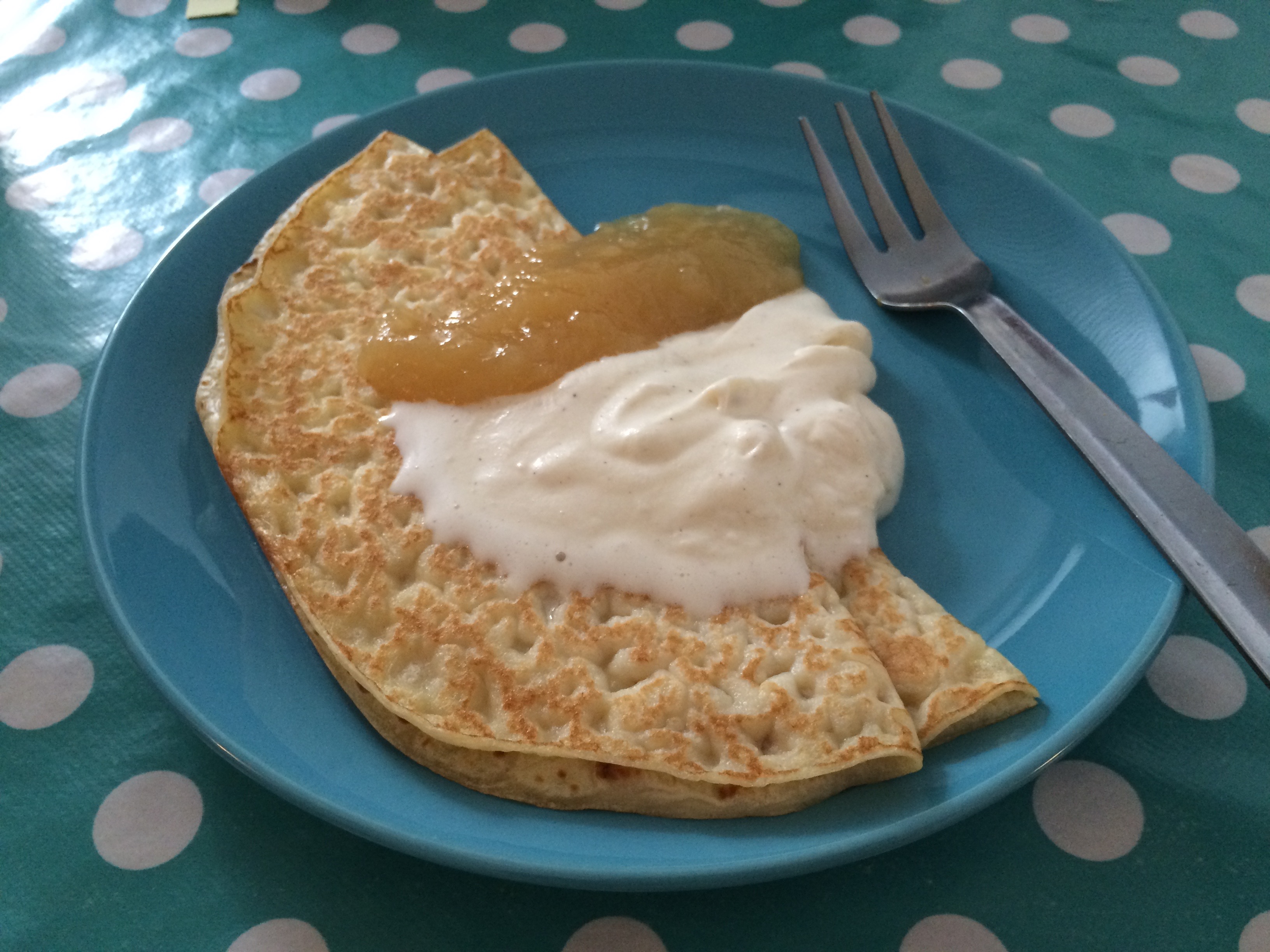 The coffee game has stepped up significantly since the last time I was in Herrang. As is typical for me, I schlepped by personal travel coffee kit all the way there, since I don’t naturally trust other people’s coffee. But the ice cream parlor has a serious coffee expert on staff now, Arsen from Eastern Europe. He pulls a perfect espresso macchiato, dark, smooth, and creamy. A perfect start to my late mornings in Herrang. 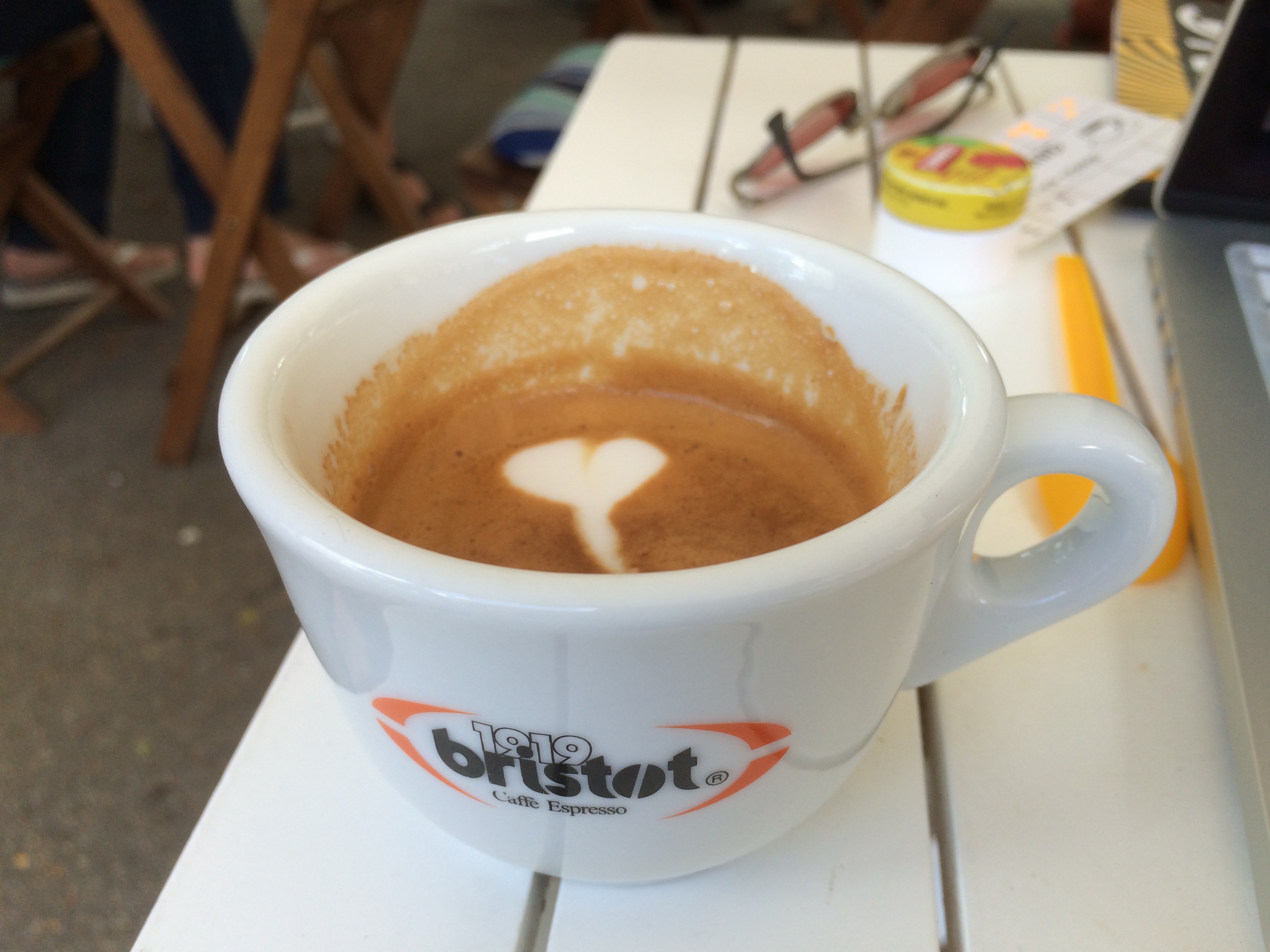 It’s not always endless happiness of course. I did feel lonely and bored at times, particularly since I wasn’t taking classes and most of my friends were either teaching or taking class during the days. Being in a foreign place, away from my regular social circle, did bring out introverted and anxious feelings in me at times.

I got sick, as do most people at Camp. It’s kind of inevitable, since there are hundreds of us all living on top of each other, dancing in close embrace, up at all hours, not getting enough sleep. The “Herrang Flu” is legendary and I feel lucky that it only took me out for three days or so.

The mosquitos are a constant nuisance in Herrang in the summer. I am not super sensitive to those things, but I know some people who had terrible allergic reactions to the Swedish mosquito bites.

Home of the Happiest Feet

With all that, going to Herrang was totally worth it. Awesome people, the best dances, an amazing jazz dance community, and a beautiful setting. There isn’t much more that I need in life.

I don’t think I can manage a regular pilgrimage there, but I will happily return sometime in the future to the Home of the Happiest Feet. If you consider yourself a serious lindy hopper, you do need to go to Herrang at least once. But fair warning, you might get hooked and start organizing your life around getting back there every summer. 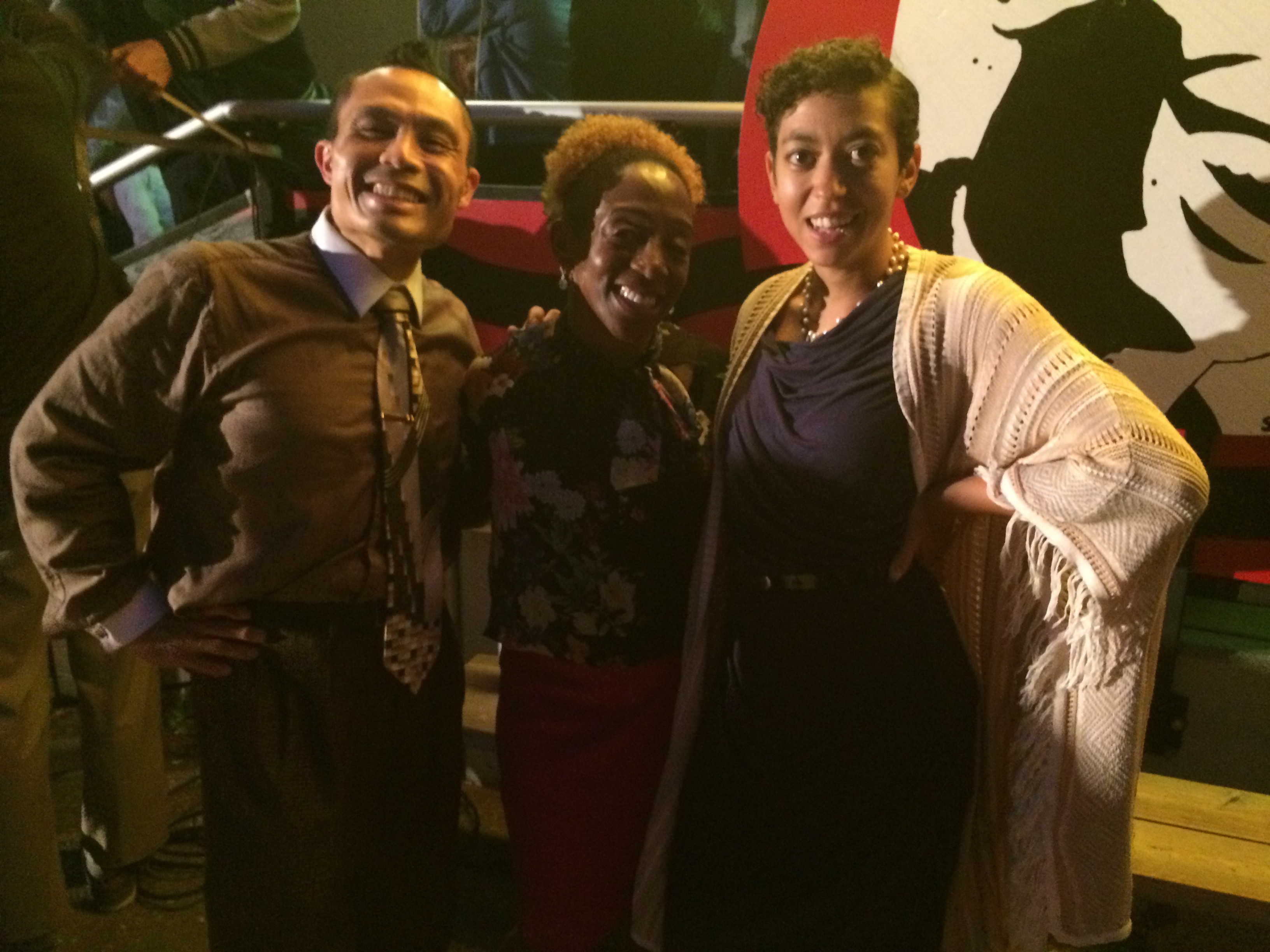 For another great recap on what all the fuss about Herrang is, check out DogPossum’s excellent blog post.