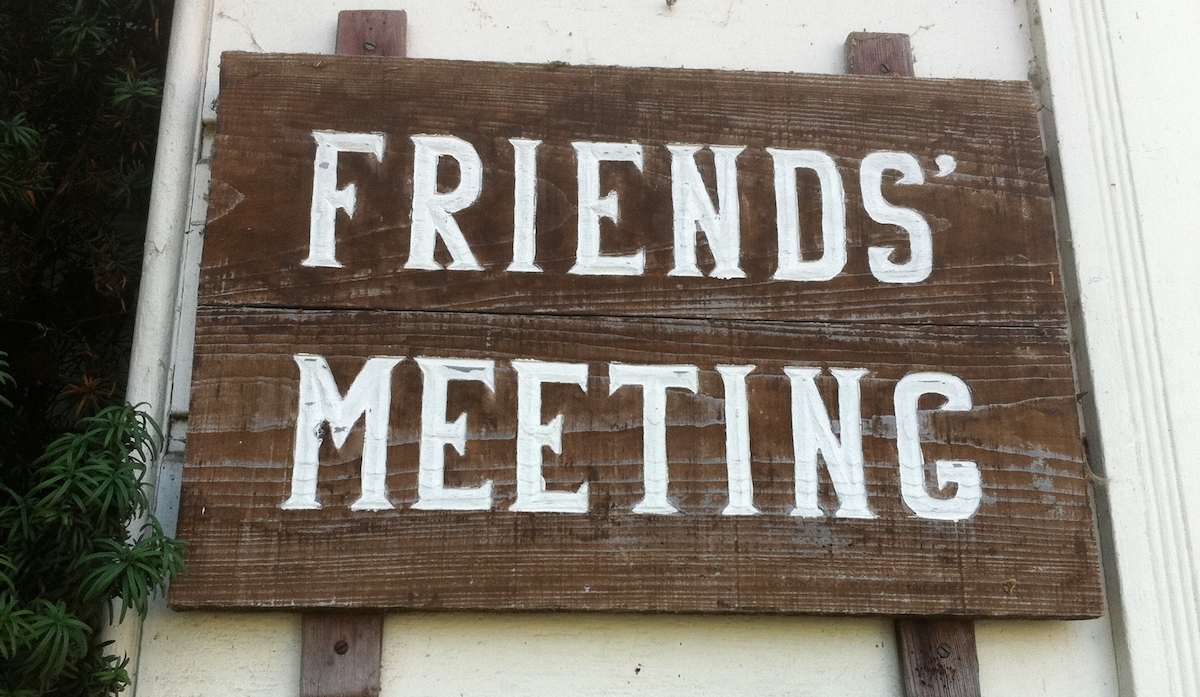 Here is the message that was communicated from New York Yearly Meeting of the Religious Society of Friends (Quakers) to President-elect Donald Trump a few days ago.

Although I have not attended Quaker Meeting for a very long time, I am still formally a member of the New York Yearly Meeting and the Brooklyn Monthly Meeting. As such, I whole-heartedly endorse this message.

Quakers’ Message to President-elect TrumpDenounce Campaign Rhetoric of Bigotry and Reject Cabinet Appointments Who Support Hatred[November 29, 2016; New York, NY]Dear President-elect Trump,We write to you representing New York Yearly Meeting, a regional body of Quakers comprised of eighty worshipping communities in New York, New Jersey, and Connecticut. Most of the Friends in these communities did not vote for you. Yet we are prepared to support your initiatives where we find agreement with them. We support your intention of serving all Americans as our President, and of uniting our sorely divided country. We support your stated goal of radically reducing the presence and impact of corporate lobbyists in our government. We support reforms and initiatives which will create jobs and a good quality of life for all Americans, including both the middle class, whose place in our society has been seriously eroded in the past forty years, and those trapped in poverty. We support trade compacts which do not compromise our national sovereignty and give undue power to multinational corporations. We look forward to finding other areas of agreement towards which we can work together, as well.We write to you out of concern for the ways your campaign rhetoric has impacted, and is still impacting, our nation. Your language during the campaign, in times too numerous to mention, evinced racism, sexism, bigotry, and xenophobia. There is a direct connection between what you have said and the fact of neo-Nazis descending on Washington, celebrating you as their leader, inspired and encouraged by all you have said over the past many months. We applaud your denouncing and condemning these misguided Americans. But this is not enough. We feel strongly that you must also renounce the rhetoric which inspired them to believe that in you, they have a leader who supports their hatred, prejudice, and xenophobia.For the good of our country, we feel you need to distance yourself from all those who promote such views. You have said that you would not associate with members of the “alt-right.” Your advisor and former campaign manager, Steve Bannon, has proudly named his publication, Breitbart New s, as “the platform of the alt-right.” It is disingenuous to deny the alt-right, and then to employ someone who has not only given their racism, anti-Semitism, and islamophobia a platform, but who has actively contributed to promoting such views.Actions speak louder than words, and your keeping Mr. Bannon as co-chief of staff sends the eloquent message to all that you still support those white nationalists whom you have verbally denounced and condemned. Similarly, proposing Senator Sessions for the role of Attorney General, who was seen as unfit to be a judge by his own Republican Party due to his racial bias, sends a message to all Americans that people of color cannot expect to receive due process under a Trump presidency. We urge you to rethink these appointments. We resoundingly support your stated commitment to be the President for all Americans. You cannot do this while employing those who have denigrated large sections of the American populace.For over three hundred years, it has been our experience that if we listen inwardly, that we can hear that “still small voice” of God, which can lead each of us to just and humane actions, guiding our lives and decisions. We will be praying for you, that you are able to hear that same voice, and to act from it.In Faith,Lucinda Antrim, Presiding ClerkChristopher Sammond, General SecretaryNew York Yearly MeetingOf the Religious Society of Friends (Quakers)Media contact information:Sarah WayInterim Director of CommunicationsNew York Yearly Meetingcommunications@nyym.org212-673-5750