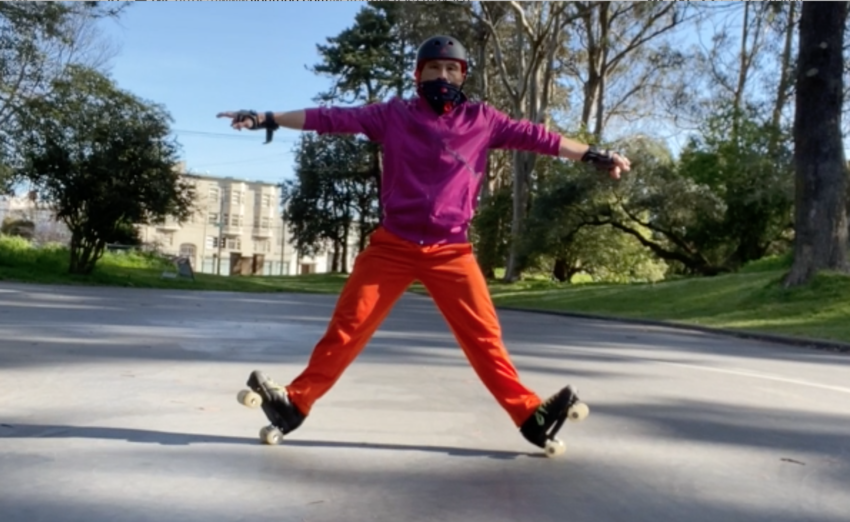 As a newbie quad skater, I love capturing video of my progress as I learn new moves and tricks. And I’m not alone. A lot of the resurgence of interest in quad skating has come from the thousands of skaters posting videos of themselves on Tik-Tok, Instagram, Facebook and YouTube.

So one big issue with recording yourself is that you are moving. A lot. So just setting up a phone or a camera on a tripod is pretty limiting.

Some folks are blessed with helpful friends and partners who will film them as they skate. But others like me just set our phones on the ground and do our best to skate in the frame, with varying results.

And then came the Pivo. It’s kind of hard to describe what it is, since there really isn’t anything on the market quite like it. The makers describe it as an “interactive smart pod equipped with AI-powered motion tracking capabilities.” Basically it’s a device that you attach your phone to that can track you 360 degrees for capturing photos and videos.

The form factor is basic: a small black cylinder about the size of two roller skate wheels stacked on top of each other. It only has one button to turn it on and off. The rest is handled by the proprietary app that you download onto your phone.

I’ve had my eye on the Pivo for quite some time, because of the catchy and ubiquitous adverts that I see all over my social feed.

Here’s some examples of skaters shooting themselves using a Pivo.

So I bit the bullet and bought one a couple of weeks ago.

The Pivo Silver arrived just a few days after I ordered it, packaged in a stylish black box. It took me only a few minutes to set up. I had to download the app, turn on the device, pair it, and set it down on a flat surface. It immediately started tracking me as I moved around my living room, even as I dodged, ducked and weaved around it. So far so good.

But now the real test: bringing it to the skate rink.

My first test was seeing how the Pivo would do during a normal skate session in Golden Gate Park. There were a dozen or so other skaters nearby, but none right around me. Here’s how it went.

You can see how the Pivo wasn’t able to keep focus on me with even one other person distantly in the frame.

I tried a half-dozen more times to shoot video that day, but all of them were a failure, like this one.

For another test, I moved to the entrance to the California Academy of Sciences, where I was almost alone. This recording was a bit more successful.

I decided to come back very early next morning, in the hopes of being able to skate without other people pulling the focus of the Pivo. Even at 8:30am, there were two other skaters nearby, plus bikers, joggers, and dog walkers.

In this video, you can see me struggling to get Pivo to focus on me. Another big issue was that if I skated even moderately fast, the Pivo would lose me, as you can see at the end of this video.

This was me doing some mohawks, side surfing and heels up moves around the Pivo that I think look pretty decent.

This was my most successful continuous skate.

So all in all, a very mixed bag, even under these more ideal conditions.

This was my most successful video project with the Pivo: creating a “Clone Trail.” I shot this after getting the idea to do a skate video in a vintage outfit.  It took a few tries to get this right, but honestly I love the results!

The Pivo has a lot of other shooting modes. These include:

That’s a lot of options! If you are the kind of person who likes to make lots of unusual media content, the Pivo might be the tool for you.

My main interest is shooting video of myself, so I’m limiting my comments to that feature.  Even Clone Trail, which was fun to make, is not something I would only do a few more times, if ever.

After a week, I decided to return the Pivo.

I wanted to like it, but it just won’t work for the kinds of video I want to shoot, given the environment I am typically skating in. The inability of the Pivo to keep tracking me unless I am completely alone is a deal killer. It also loses me when I move at more than a moderate skate speed. And the videos it produces are not that great.

That said, if you have a practice spot exclusively yours, the Pivo might work for you. Or if you are trying to develop your social media presence and want to create unusual kinds of media, Pivo can help you do that.

But for me, the Pivo is a neat device that falls short of what I want. I look forward to version 2.0!