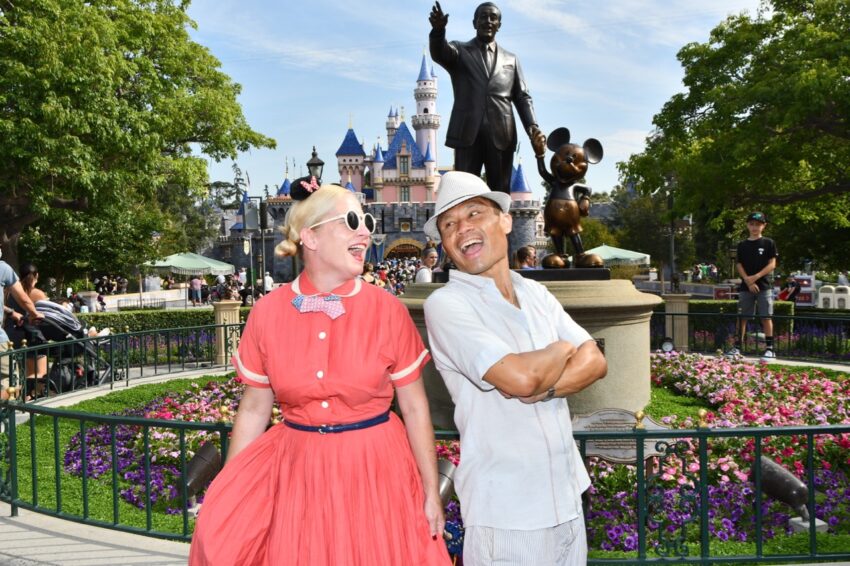 On Tuesday, my friend Kristin and I survived what could have been the worst possible day to visit Disneyland this year. And we actually had a blast!

Several months ago, we decided to risk buying tickets to Disneyland in June, thinking that probably the pandemic would be more under control and that the Disney folks would have figured out how to manage park attendance in a safe and organized way. Somewhat randomly, we chose the date June 15.

Little did we know that a few weeks later, California Governor Newsome would announce that the entire state would be “open for business” on June 15. That meant no restrictions on public gatherings, no mask requirements, no social distancing, and no limits on out-of-state visitors.

Not only that, the National Weather Service announced a heatwave arriving on June 15, with temperatures approaching 100 degrees.

So yeah, the perfect conditions for being suck with 10,000 people in a theme park.

Luckily, I chose a travel partner wisely. Kristin shares my exuberant enthusiasm for the Disney parks, but also has a “go with the flow” attitude that made decision-making so easy. She’s also stylish as all get out.

That said, when we arrived at the park entrance at 7:30am, the crowds were pretty intimidating.

But pretty soon we were through security and the green wrought iron gates and were happily promenading down Main Street!

Our first stops were the official Disney photographers at the gate and in front of the castle. There were hardly any lines for these photos, and it felt smart to get this out of the way while we were looking fresh. We were so excited with how these pics came out!

Of course, we had to do some dance-y ones.

Then we headed over the Galaxy’s Edge to check out the Star Wars action. The land was almost empty when we got there! So time for more pics!

We did this fun pic dueling with our parasols.

Which my friend Nick Williams nicely “enhanced” to be more appropriate for the land.

For sure it was hot as hell and the crowds were pretty intense. But we still had the time of our lives and made great use of our one day in the park. Some of my favorite moments:

That said, a lot of features of Disneyland weren’t available that day, like live entertainment and bands, character “meet and greets,” parades, or fireworks. There were no Fast Passes or single rider lines, which in the past were life savers for me.

Nevertheless, the magic was still there!