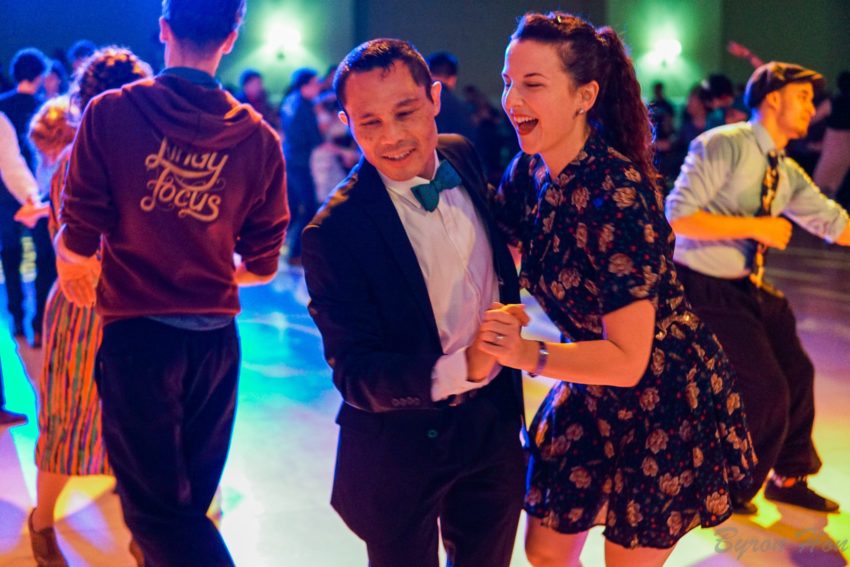 I’ve gotten to the age as a lindy hopper where I feel empowered to be a “swing snob.” You know the person — they only dance with certain people, maybe their regular partner and a couple of their friends. That’s a label I’m willing to bear.

At this point, I’m lindy hopping maybe once or twice a month. So when I do decide to go out to a swing dance, I really need to maximize my time. Which means getting in as many “good” dances as I can.

That definition of a “good” dance has changed a lot as I’ve gotten more experienced as a dancer. Multi-disciplinary dancer and computer scientist Sommer Gentry exposed me to the idea of “haptic communication.” In her research, she writes about partner dancing as a series of micro-exchanges or transactions between partners, that shape the form of their coordinated movement, their conversation.

Lindy hop is a language, which I have had 23 years of learning and practicing, absorbing new words, phrases, expressions, accents, and dialects.

There aren’t a lot of folks who are as obsessed as me. For some folks, their vocabulary is not very large, or they aren’t that able to listen and speak at the same level as me, or they simply speak another dialect. If that person asks me to dance, I will politely decline. It just won’t be as pleasurable for me to not be heard by my partner, or not feel like there is a real conversation happening. It’s nothing personal — I speak fluent Klingon and you probably don’t, so there isn’t much we can talk about.

Some people say, “Oh it’s just three minutes of your time, so you can just do basics with them.” (In the old days, we used to call this “doing your duty.”) But for me, if a favorite song comes on, there’s nothing worse than wanting to express myself within that song and not feel like I have a partner I can do that with. I would rather just solo dance or enjoy the song on the sidelines.

If that makes me a swing snob, that’s just where I am at. I hope I am not causing undue distress and awkwardness for those I decline to dance with.