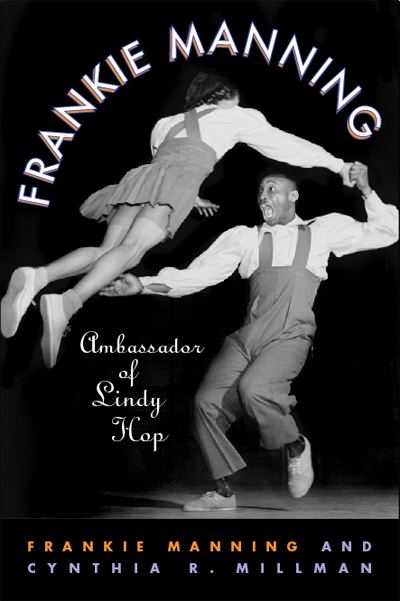 I am so proud of our swing dance community right now I could burst.  What began as a random suggestion by my friend Shorty Dave — "Hey wouldn't it be great if all the lindy hoppers in America bought Frankie's book on the same day?" — blossomed into an international campaign that shot Frankie Manning: Ambassador of Lindy Hop from 9,342nd place to number seven on the Amazon best-sellers list yesterday! As i write this, the book is still holding at number eight.

All day yesterday there was a palpable sense of excitement on our site Yehoodi.com as people posted on the discussion boards that they had bought a book, or bought two books, or bought five. All day posts from around the country shot back and forth chronicling the progress: "I bought one, it's at #130!" "I got mine, it's at #45!"

Cynthia Millman the co-author called me several times as it continued to climb and climb. When it got to the Top 50, I was satisfied that we had done what we aimed to accomplish, which was put Frankie's book on the best-seller list.  "The rest is just gravy," I told Cynthia, predicting it would go down later in the day.

People were emailing and texting me updates all day as it shot up the charts.  I heard stories about swing dances around the country where the organizers had set up laptops near the front desk where people could buy the book that evening. Dancers were sending emails out to their friends, buying books for family, posting the news to their blogs and myspaces.  It grew to have a life of its own.

It's hard to beat the hook: A legendary swing dancer has finally published his autobiography.  On his 93rd birthday, let's all buy his book as the best birthday present of all for the man who gave us all so much.  It almost sells itself.

Not to say that there wasn't work involved:

All-in-all, a tremendous team effort that all played a part in the success of the campaign.  I'm so grateful to be working with such a great crew.

Frankie Manning is in France right now, teaching workshops for a few days.  But I understand that he's been kept apprised of the progress and is tremendously pleased. Here's the message he sent along:

That really makes it all worthwhile to read that.