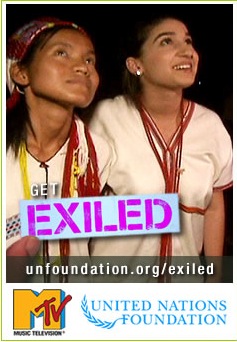 The UN Foundation just sent me this interesting notice about a contest they are running with MTV called “Your Turn to Get Exiled.” Apparently this is associated with some MTV reality show called "Exiled."  All that matters is that if you win you get to go on a "net observation trip" to somewhere in Africa where they are distributing anti-malarial bed nets.  (For those that don't know, bednets are one of the cheapest ways of decreasing child mortality rates in Africa, which suffers from high rates of malaria.)

We’ve partnered with MTV to provide ways to connect viewers of their new hit show, Exiled,
with the issues seen on the show as young stars temporarily give up
their pampered lifestyles to live with indigenous cultures throughout
the world. We’ve watched as they’ve been shipped off to fend for
themselves as they learn about hard work and the issues that affect the
local families they stayed with, including deforestation, access to
clean water, animal endangerment and malaria prevention.

Now it’s your
chance to enter our “Your Turn to Get Exiled” sweepstakes for a chance to win a bed net observation trip to Africa with our Nothing But Nets campaign or a trip to the MTV 2009 Movie Awards!

Click here to enter. Winners
will be notified in January 2009.