Today is the first day of "Frankie Week," taking place from March 12-22 — eleven days for lindy hop scenes from around the world to create social media to get them excited about Frankie Manning's 95th birthday in May. We are asking people to create a "photo birthday card" and videos of their scenes dancing the "shim sham" line dance to commemorate this momentous occasion.  Then we are asking them to upload their creations to our Flickr and YouTube groups respectively, so that other people can see what their peers are doing and get inspired. 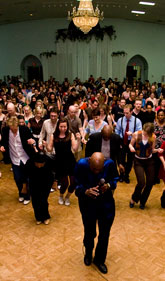 Once all of the videos and photos are in, my team will compile the best ones to present to Frankie Manning (and everyone else) during the Frankie 95 Festival in May in New York City.  So Frankie will be able to look back years from now on the impact he has had around the world.

This is one of those online massive mobilizations that would take so much more resources and dedicated technical staff to pull off even five years ago that is relatively simple to pull off today.  Really all you need is an existing motivated social network, some targeted messaging, and a small crew of skilled volunteers to launch this today.

I'm excited to see what people come up with!