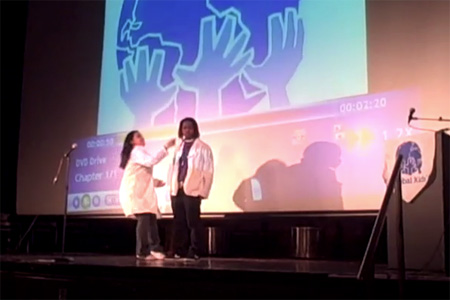 Last Friday, Global Kids held its Annual Conference at Baruch College, gathering 600-some students and educators from around New York City to examine critical social issues, meet each other, and get activated.  This year's theme was "Global Health — Be the Vaccine," featuring speakers and workshops on a wide variety of health-related topics.

An important aspect of the Global Kids Annual Conference is that the day-long event is entirely youth-led.  Our Global Kids teen leaders are in charge of nearly every aspect of the conference, from the selection of the overarching theme, to the workshop facilitating, MCing, and entertainment.

This year, we tried something new: enabling a team of Global Kids teens to film different parts of the conference using Flip cameras and editing the best clips together into a mini-documentary about the conference that is shown at the closing plenary of the event.

There are a lot of aspects of how this was organized and created that my colleagues Barry and Joyce and I could talk about.  The one lesson that I want to focus on here is how the act of filmmaking got our youth more engaged with the event that they were at.

The reality is that even under the best of circumstances, being at a conference can get boring…  particularly if you are a teenager.  Listening to keynote speeches given by adults, going to workshops on complicated social and political issues, wading through the pages and pages of materials in the conference packet — not necessarily the most exciting activities for a young person to engage in.

So by giving our teen filmmakers specific "missions" (film 30 seconds of the most important points made by the 2nd keynote speaker, interview a teen participant about their impressions of the conference, capture 30 seconds of footage of teens discussing a social issue in a workshop…) we were helping focus our energetic teens on specific actions they could do while the conference was going on.  It gave them a reason to listen and observe more carefully what is going on around them, and think about how they might present it to someone else later.

A good sign that we were on the right track was how enthusiastic our teen filmmakers were to do video missions all during the day.  I had assumed that most of them would do a few shots in the morning and perhaps get bored of it and return the cameras to us before lunch. But all of them wanted to film during the entire conference.

I suppose that I should not have been surprised.  It's fun to shoot video, particularly with a user-friendly device like the Flip.  I myself have observed that if I am at a conference  and find myself tuning out or falling asleep, I can increase my own engagement with the subject matter by taking notes, blogging, or taking video of the event.

Taking the lesson a bit further, we often think of how we can deepen the engagement of our virtual participants at events that we are simulcasting from a real world conference.  Just parking your avatar in a chair and watching a live video or listening to an audio feed gets boring really fast.  So we are always thinking of activities we can be doing with the in-world participants to keep them tuned in to the content — whether its posing questions in the text chat, having them debate one of the key points, or having volunteers paraphrase the speaker's comments in their own words. Having virtual participants film short videos of the event, and then make those videos available to other audience members — both virtually and in the real world — might be a great way to engender deeper attention to the content of the conference.  The conference organizers might edit together the best videos into the "official" conference summary video to show at the end.  Or they might give prizes to the best videographers.

My friend In Kenzo has actually already done this, with the "Visions of Global Justice" art opening that she and the USC Network Culture Project organized in March last year.  They created incentives for machinimatographers to cover the art opening, and they gave Linden dollar cash prizes to the best videos. Awesome stuff.

I'd love to try this for a future Global Kids virtual event.