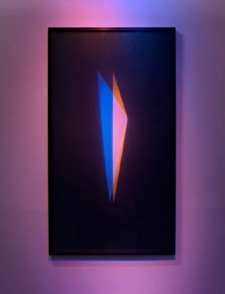 I've been a big fan of the work of Quaker artist James Turrell after seeing him lecture in 2007, and then visiting his "Meeting" installation in 2008. Mr. Turrell has a new show opening on September 10 featuring his large holographic work that looks amazing. From the press release:

In this new work James Turrell presents the mass and physicality of light, a subject he first explored in his seminal Projection Pieces from the 1960s.  Here, that physicality is generated using the optical space of dichromate reflection holograms.  Holograms are traditionally used to make an illusion,  where light becomes the means through which a three-dimensional object is depicted.  Turrell instead uses holography to examine the phenomenon of the light itself,  capturing it’s normally fleeting qualities and allowing light to become the object.

I find Turrell's work tremendously "Quakerly."  It elicits calmness, stillness, contemplation.  One experiences light differently after seeing his work.  It has a timeless and classic quality that is surprisingly moving.

At PaceWildenstein at 534 West 25th Street, NYC, from September 10 through October 17. The artist will be present for an opening reception on September 9th from 6-8 p.m.