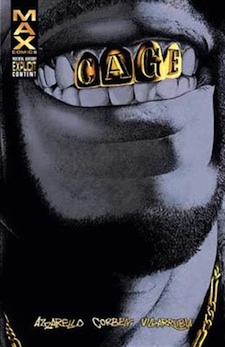 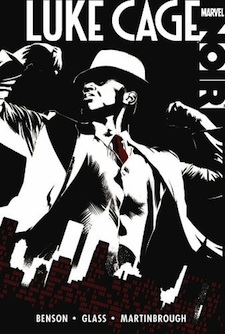 I just finished Luke Cage Noir (2010), part of the Marvel Comics "Noir" series, re-visioning various superheroes as trenchcoat-clad detectives, gangsters, and devious molls from the 1930s.  Luke Cage is nearly a perfect choice, since he is a street-smart, hard-edged detective, who also happens to have bullet-proof skin.

I found myself comparing the graphic novel with the also excellent Cage (2002) graphic novel, written by Brian Azzarello, with art by Richard Corben. Cage presents Luke Cage as a badass anti-hero in a dark urban hellhole, caught between warring factions while unraveling a murder mystery.

Luke Cage (or "Power Man") has been one of those superheroes that I've admired but never really invested in any of his comics.  Reading these two graphic novels, I think that has to change.  Here's a quick comparison of the two…

Luke Cage is notable for being one of the first African American superheroes to star in his own series.  Appearing first in "Luke Cage, Hero for Hire" in June 1972, he was a product of the "Black Power" movement and the public appeal of African-American anti-heroes like Shaft.

Luke Cage's main power is his superhuman strength and super dense "hard as steel" skin.  He also is a skilled street fighter, which gives him leverage against even foes stronger than himself.

One of the most striking things about Luke Cage Noir is the liberal use of "jive talk" slang.  The usage of jive gets a bit precious at times, but generally helped place the action within the era.  Check out the dialogue early on between a gangster, a dancer and Luke Cage:

Gangster: I see some chippies that need some watering.  Il'l you later, Inky Dink.  Try not the get shot while I'm gone.

Dancer: Can't believe it's really you.  We heard you got cut down.

Luke Cage: Do I look like I took the Big Sleep?

Dancer: After you got sent to the cooler, Josephine went off the track.

Luke Cage: How so?

Dancer: Word was, she was kicking the gong around. I didnt' see it, but she looked like she was all gowed up on something. And there were some busters… Plenty of em… She might have even been pro skirting it.

Luke Cage: Yeah? That be how you're s'posed to take yo dick out yo drawers before you start pissin'?

Gangster: Nah, nigga, I can handle my dick fine.  Ask yo mama.  What I heard was you're bullet-proof.

Luke Cage: Then it must be true.

Luke Cage: Then pull that trigger…

Both of them are effective at evoking distinctive moods and textures.  The use of profanity I found most jarring, since Luke Cage in the normal Marvel Universe never cursed, opting instead to use his catch phrase "Sweet Christmas!"

The art by Shawn Martinbrough for Luke Cage Noir has a warmth and a richness that complements the story well.  Luke Cage is big and muscular, but he's not a bruiser.  He exudes style and pinache… when he isn't beating the crap out of somebody.

Lots of shadows and dark scenes evoke the noir aesthetic, while action scenes are drawn in fairly conventional style.  I liked his inclusion of several jazz greats like Louis Armstrong and Duke Ellington in the backgrounds of scenes, which gave them a connection to history.

Which makes the stoicism and calm of Luke Cage all the more dramatic.  He rarely changes expression, or even removes his shades and headphones. And his body is drawn like a man-mountain, a solid wall of muscle that can't be stopped. 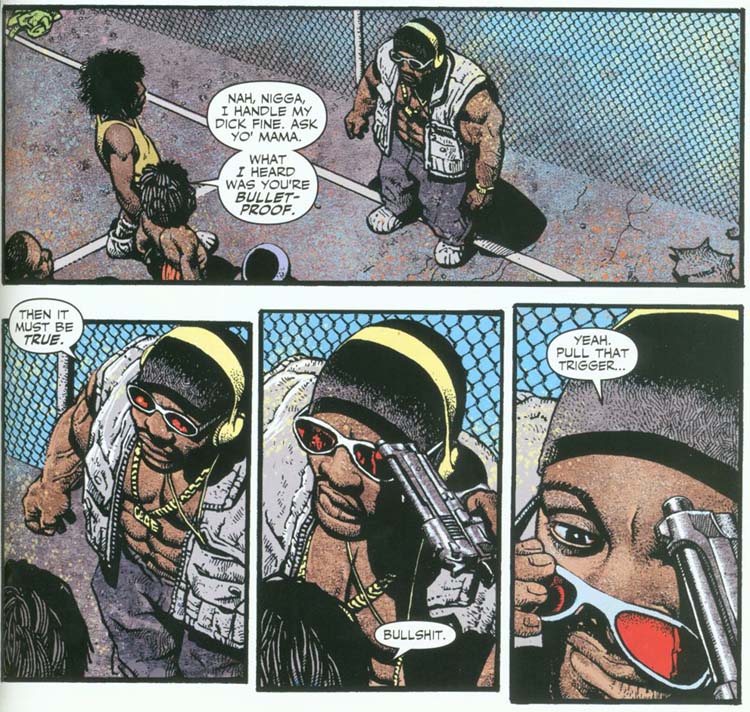 While I found the artwork of Luke Cage Noir well done, Cage was much more dynamic and even shocking in some of the bloodier panels.

I really enjoyed how both of these graphic novels treated the subject of Luke Cage's superpowers.  His supposed "bullet-proof" status is often invoked, but an open question in both novels.  How the question gets addressed in each novel was clever and smart.

For both of them, it's the idea of bulletproof Black man that is in some ways more important than the actual demonstration of those abilities. In some ways, Luke Cage's real superpower in these novels is his complete confidence in himself and his abilities, no matter the opposition.  He remains perfectly calm and in control, while blowhards, bullies and little Ceasars rage and rant all around him.

At the end of the day, what make both of these stories enjoyable for me was their differing takes on the traditional anti-hero tale.  Luke Cage is no saint, with dark periods in his past that still haunt him.  Money is always in short supply.  And while he presents himself as the ultimate badass, his humanity is often tested. Luke Cage still has to make a choice between riches and power and doing what's right.