As the final days in New York City for me wind down, I'm thinking about all of my favorite things that I've enjoyed in my 15 years here. I think I've learned a few things about how to live life to its fullest in gotham city. So here's my very subjective "Best of New York" list. Enjoy. Some of what I love most about New York is the electric confluence of various sub-cultures and stratas of society that create "only in New York" moments everyday.  One of the best examples of this is the Coney Island Mermaid Parade.

What began as a humble neighborhood celebration of the opening of Coney Island for the summer season has become an international gathering of artists, performers, drag queens and little kids dressed as shrimp. The central theme of the parade is very loosely nautical, with everything from pirates to sea monsters to popeye.  Despite the growth of the event to crowds in the hundreds of thousands, it still retains a local, amateur-y, slapped together spirit.

One of my happiest moments every year has been dancing down Surf Avenue in a ridiculous mermaid costume amidst the cheers of a friendly and raucous crowd. (And of course, it always helps to win.)

New York is foodie heaven.  In all of my travels, NYC is one of the only places I know of where you can find a huge diversity of cuisines at a price normal mortals can afford.  San Francisco is the only place that even comes close. Of all of the fantastic meals that I've had in the city, Chef King Phojanakong's two restaurants stand out as my favorites.  Kuma Inn was Chef King's first small plates, asian fusion spot he opened in 2003 in the Lower Eastside.  From a closet-sized kitchen, he and his team produce some amazing dishes, many variations on filipino and thai recipes that Chef King grew up with. My favorites are his pork adobo sliders, pan roasted ocean scallops with bacon and kalamansi, deep–fried pork belly lechon and the steamed and fried rice crepes.  But everything on the menu is amazing.

His newer restaurant in Clinton Hill, Umi Nom is a variation on the same theme, just a closer bike ride for me. New York is a great shopping town, from vintage bargain hunting to hand-crafted furnishings to haute couture. Of all the stores I've enjoyed shopping, my current favorite is Bergen Street Comics, near Flatbush Avenue in Brooklyn.  The owners Tom and Amy bring their love of comics into this small, expertly-curated store where diehard comic geeks, parents with their children, and curious wanderers mingle amidst their wonderful selection of comics, trades, graphic novels and manga.

A couch and chairs encourage you to sit a spell and read from something from their shelves and chat with them about what's new in the comic world.  Plus they have really fun parties where all the cute comic geeks hang out!

On the same blog of Bergen Street between Flatbush and Fifth Avenue is more great shopping , with everything from artisinal hot dogs, not-skeevy sex supplies, funky bikes, and pricey yoga clothing available a few steps away.

Part of the challenge of living in New York is finding the right neighborhood where you can get the apartment you want, at a price you can afford, that's close to the things that you care about (eating, drinking, shopping, friends.)  Typically you get two of those things, but never all three. 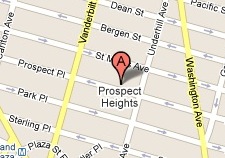 That said, I found the trifecta in Prospect Heights, Brooklyn.  It's got all that I could want in terms of accessibility, affordability, quality of life, and local color.  Bordering the also cool neighborhoods of Fort Greene, Crown Heights, and Park Slope, there are lots of great reasons to stay near to home.  There's lots of amazing food here, from nouvelle soul at Cheryls, a classic diner at Toms, authentic mexican at Chavella's, and the best ice cream in the city at Blue Marble.  In terms of culture, there's the Brooklyn Museum nearby and the main branch of the Brooklyn Library.  Prospect Heights seems to be gracefully gentrifying, while retaining much of its character and older residents. New York has all the art and culture that anyone could want for several lifetimes, and I've spent time at all of the major museums and galleries. My first few years in New York involved long days spent at the Met or the Natural History Museum, visiting galleries and exhibits that had become old friends like the Temple of Dendur and the gem room.

But the Brooklyn Museum more than any other really feels like home whenever I go there, from the delightful dancing fountain to the modernist glass entranceway, the African art, classic furniture, and exposed storage sections. And while their holdings are impressive, you can easily see most of the museum on a leisurely afternoon, and not feel overwhelmed with miles more of unexplored hallways.

The staff there are super knowledgeable and friendly, from the guards to the directors. Their "1st Fan" membership / social network is a great way to get to know people and explore parts of the museum that normally the public doesn't get to visit. And their monthly "First Saturday" events are some of the best happenings in town, with a diverse and enthusiastic crowd taking in the art, dancing to the free concerts, and watching movies in the theater.

"One need never leave the confines of New York to get all the greenery one wishes — I can't even enjoy a blade of grass unless I know there's a subway handy, or a record store or some other sign that people do not totally regret life." – Frank O'Hara

While I love this quote, New York does have plenty of gorgeous green space, from the stately Woodlawn Cemetery to the Bronx and Brooklyn Botanic Gardens, the urbane Bryant and Madison Square Parks, and of course the venerable Central Park. Not to mention entire islands of green space on Governors Island and Randalls Island. My favorite public green space is Prospect Park in Brooklyn.  Designed by Frederick Olmstead, who also designed Central Park, you can see his mark everywhere — the boat house, the ridiculous classical columns, the meadows framed by trees.  More than Central Park though, this is the people's park, where you will find Pakistanis playing cricket, latinos playing soccer, and white hipsters hula-hooping and throwing frisbees.  The concerts in the bandshell are incredibly ecclectic and always packed.  And the green market on Saturdays is full of delicious and fresh produce, bread, eggs, meat, and more.

One of my favorite NY hidden treasures is in the middle of Prospect Park: a small Quaker cemetery where the Friends have been burying their dead for hundreds of years, before the park was even there. Not open to the public, visiting our cemetery is one of the few exclusive Quaker privileges that exist.

Okay, re-reading this, I realize that every entry here (except for half of the best restaurant) is in Brooklyn.  So clearly — scientifically — Brooklyn is the best borough. LOL.

So what are your New York bests?