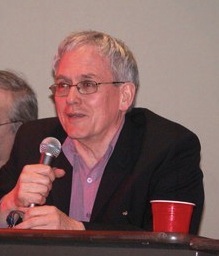 I regret to pass along the sad news that Mr. Terry Monaghan, longtime historian of lindy hop from the UK, has passed away. Terry was co-founder of the legendary Jiving Lindy Hoppers dance troupe in the 1980s and a long-time chronicler of the history of swing dancing.

This is what I received from Elliott Donnelly earlier today:

Terry Monaghan passed away yesterday from pneumonia caused by complications from treatment he was receiving for a brain tumor.

There will be a service on July 9th in London and another service sometime in the future in the States.

Terry is survived by his wife Aileen and daughter Jenny.

They are accepting letters and cards at the following address

RIP, Terry. Thanks for all that you have done to preserve, chronicle and spread the word about this dance that you loved so well. Our deep condolences to your family.

Although an avid social dancer from an early age, Terry Monaghan’s actual involvement with the dance world took shape at the end of the 1970’s when a combined research/performance project led to the co-founding (with Warren Heyes) of the UK based award winning Jiving Lindy Hoppers in 1984 (who are now steadily catching up with the Mama Lou Parks Company’s all time record for the longest running performance Lindy Hop company.)

Although starting from a specific perspective of re-staging performance quality Lindy Hop, his interests broadened under the direction of “Pepsi” Bethel, and through working with past and present leading dancers in this field such as Frankie Manning, Norma Miller, “Mama Lou” Parks, Vernel Bagneris, Bill Louther and George and Sugar Sullivan in particular. Devising, organising and promoting the associated tours, individual stage productions and educational jazz dance projects, resulted in separate writing and research involvements.

Writing now for The Dancing Times and The Guardian newspaper in the UK, and registered for a PhD on Harlem’s Savoy Ballroom at Goldsmiths College, University of London (where he now also teaches part-time), he also was the “Dance Consultant” for the highly successful 2005 BBC TV production on Jazz and Latin dance “Bruce Goes Dancing”, and is currently a board member of the Society of Dance History Scholars. In particular Terry organised in Easter 1986 with Bob Crease and the NYSDS, the first international get-together of the new wave of 1980s Lindy enthusiasts in New York, and more recently was one of the three organisers for the 80th birthday celebration of the Savoy Ballroom held at the Alhambra Ballroom in Harlem.

Further to that work he is now also working in conjunction with the Lindy Hop research activities of the Houston TX Swing Dance Society. He also takes a strong interest in rhythm tap dancing and had co-produced and directed various productions for London’s Southbank. The locus of his work remains the Savoy Ballroom and the need to construct new versions of the original swing music and dance dynamic through theoretical, archival and practical research into the relevant music and dance forms.