So last night I taught what I think was a very successful Breaking 101 class at the Herrang Dance Camp.  I thought it might be a good experience for me and expose people to a different kind of movement that might help their dancing in general.  And I think it is always useful to show the connections between different vernacular dances, particularly ones with such similar roots as hip-hop and lindy hop dance.

We had about 60 enthusiastic dancers there in the “savoy ballroom” tent, who were eager to learn how to b-boy. I began with a quick warmup to get them used to the kind of movement to the music, which got them pretty hyped.  Then we talked about the roots of breaking, how it connects to the larger Hip-hop culture and other styles of related dance, and what are the basic elements of breaking.

I was assisted by the amazing Traci Bartlow of Oakland, a Frankie Ambassador and hip-hop innovator in her own right! 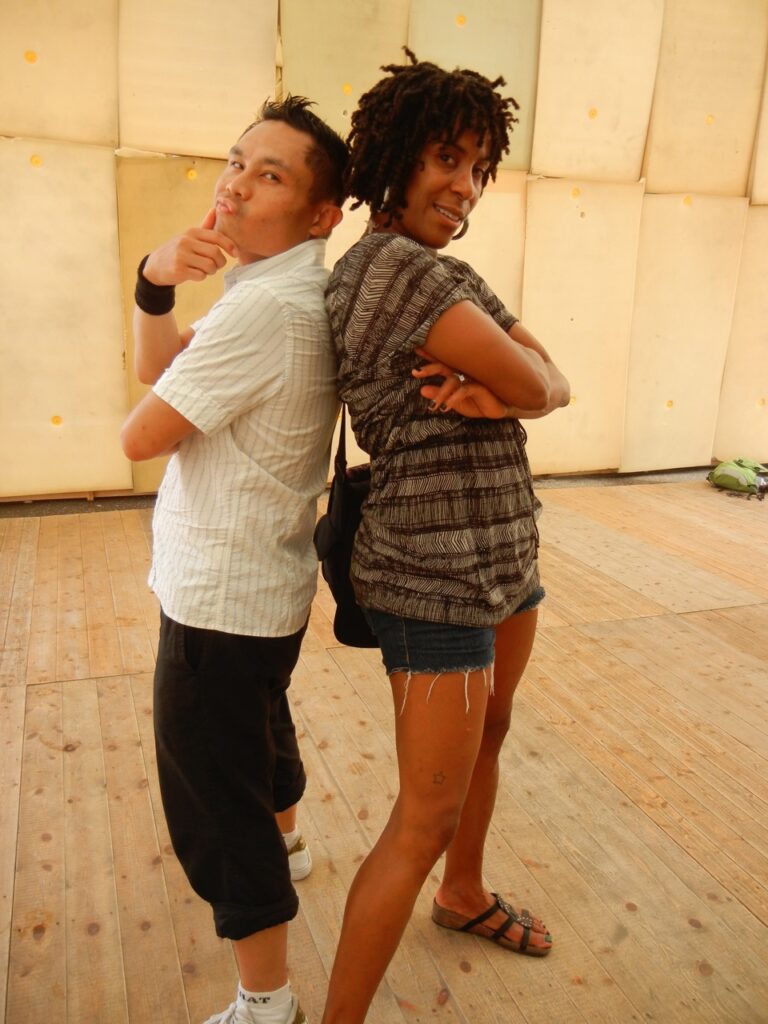 Then it was time to dance! I took them through the basics of uprocking, the basic six-count floor move, a “baby freeze,” and how to put them together into a complete set.  Unlike the last time I taught this in Herrang, I had some able assistance from Jerry from Houston and Tracy from San Francisco, who are frankly much better hip-hop dancers than me.

I’m proud to say that by the close, pretty much everyone was able to do the basic “text” of an uprock, some kind of floor move, a freeze, and a pose at the end.  We even had a cypher at the end of class, and a lot of people went in to share whatever they knew.

Afterwards, people hung out to dance and exchange moves until a camp volunteer shut down the sound system at 11:30pm. Several people were sad to learn that there were no more planned classes afterwards. The best quote from the class was from a young woman who told me, “I don’t want to lindy hop anymore. I just want to learn THIS.”

Today we are going to keep the funky energy going with a hip-hop open jam right after the evening meeting.  There are so many dope hip-hop dancers here , it just makes sense. My friend Janice tells me that it is happening right outside the main Folkets Hus building! So we should have a great crowd and fun energy. Can’t wait!