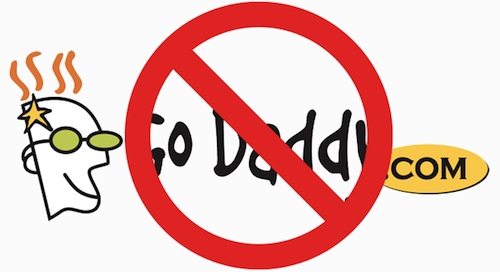 I probably should have done this a long time ago, but on December 29 I'm moving my web domains from the domain name registrar Godaddy.com to another service.

I probably should have done it awhile ago. Godaddy has tacky, sexist advertising. The CEO enjoys killing elephant for sport. And finally earlier this month, they announced their support for the SOPA legislation that threatens the underlying structure of the internet.  WTF?

Reddit user "selfprodigy" started by ball rolling on December 23 by pledging to move 51 of his domains from Godaddy until they express their opposition to SOPA.  He also suggested that others do the same on December 29, i.e. "Move Your Domain Day." The opposition has grown and grown, with even Wikipedia moving their domains.

So I'm going to do my little bit as well.  If you'd like to do the same, here's some info on how to move your domain and where you can go to publicly pledge your opposition to Godaddy's support of SOPA.