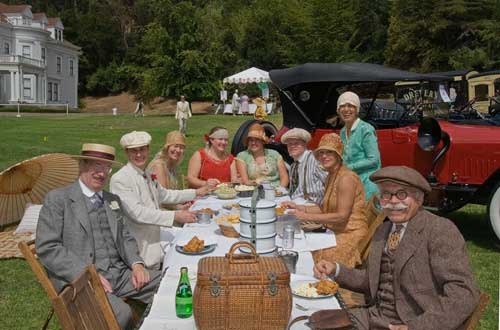 The Gatsby Summer Afternoon is a lavish 1920s era lawn party put on by the Art Deco Society of California.  Hundreds of vintage hounds gathered yesterday on the lawn of the elegant Dunmuir estate in Oakland to be transported briefly into another time, bathed in warm sunshine and fresh air.

I've been to "prohibition-era" and "speakeasy" parties for years, but no one I know takes it as seriously as the Art Deco Society of California.  Everything  that people wear and bring with them is either original artifacts  from that era or would fit in seamlessly into the 1920s.  From classic cars to vintage gowns to the cutlery on the tables — no detail is unimportant to these folks.

As a more casual participant, I found myself fretting about what to wear and what to bring.  In particular, preparing an appropriate picnic lunch proved to be challenging.  Almost everything I would normally bring to a picnic would not have existed in the 1920s: plastic bags, beverages in plastic bottles, plastic tupperware, plastic cups, plastic cutlery, plastic plastic plastic….

PLASTICS. I realized yesterday how much of my modern existence is sustained by this one material that did not exist until fairly recently.  And finding ways to live without it, even for an afternoon, was not that simple.

For food, I made myself some sandwiches and covered them in paper towels. These also did not exist in the 1920s, but least were not so obviously modern.  Probably more appropriate would be to put them in a wicker basket and cover them with a cloth.

For beverages, I went to 7-11 to see what kind of drinks I could bring.  Water: only in plastic bottles. Soda: Only in plastic bottles and aluminum cans.  Wine or beer would have been fine, except I don't drink alcohol.  So I had to go to higher end grocery to get some Pellegrino water, which seemed to match the spirit of the event.

For snacks, potato chips were out because of the packaging. Most cookies too.  I found some biscotti in a cardboard box that seemed appropriate.  Even better of course would be to bake something myself and bring it in a ceramic dish.

Basically, before our modern conveniences of fast food, 7-elevens and refrigeration, people (mostly women) spent much more time preparing everything by hand.  It required a lot more planning and effort.  You could spend an entire day preparing for a picnic lunch.

Individual items like a cup or a plate or a napkin were relatively expensive, so they were designed to be used over and over again.  Because of this, they were made with care and craftsmanship, and thus are still treasured today.

Technological change, as the graphic to the right says, have made our lives more convenient by creating much more disposable, single-use goods that never existed before.  But they have also created a lot more waste and environmental damage than our more traditional manufacturing and consuming practices.

I don't think we can go back to living like a dandy in the 1920s.  There were certainly lots of race, class and gender issues from that era that we shouldn't go back to.

But there is a lot to be learned by revisiting our consumption and waste practices and trying out something different.  We can use less, reuse more, recycle as much as possible, re-vision our lifestyles.  And if we are wise and clever, we can come up with ways to live today that make it possible for our children and our childrens' children to enjoy fun picnics out in the sunshine and clean air. 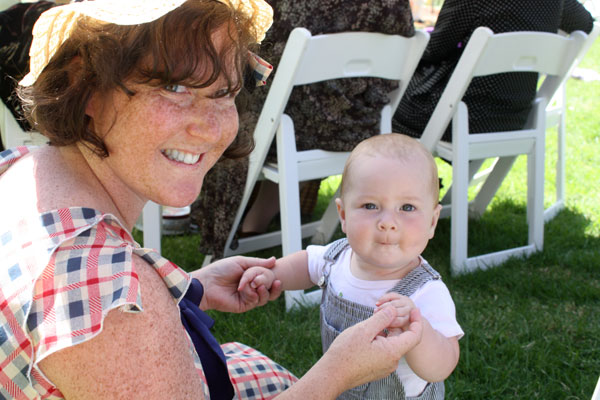