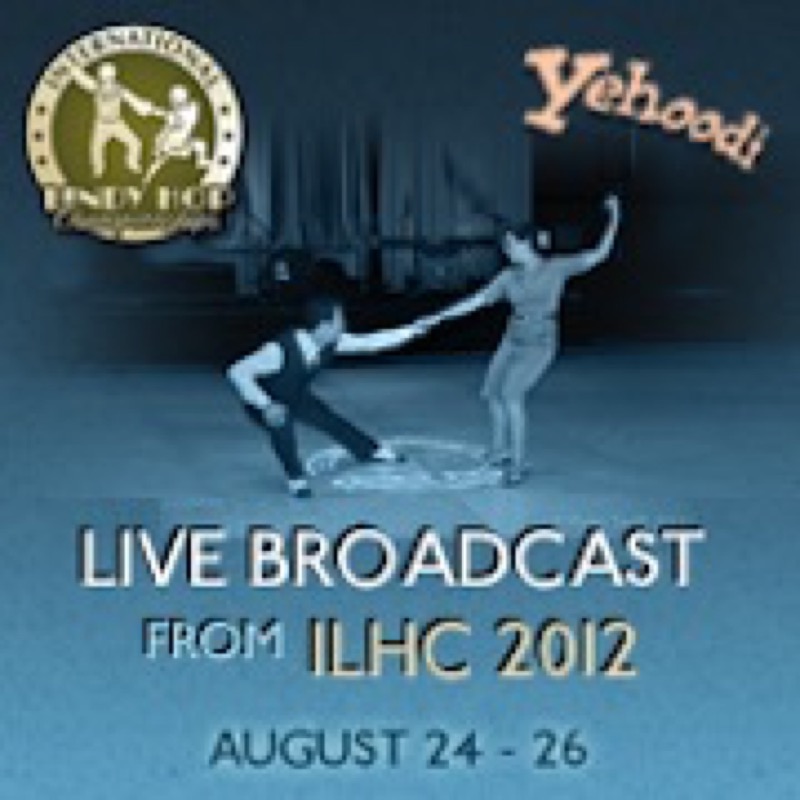 A few months ago my team at Yehoodi.com began an audacious plan to broadcast live on the internet the International Lindy Hop Championships in DC, the most prestigious dance competition in the lindy hop world.

This was a big first for the swing dance community.  While other lindy dance contests have been live streamed before (notably the Ultimate Lindy Hop Showdown in New Orleans), this was the first time a major international lindy hop competition has had a full broadcast schedule organized alongside it.

When we were asked by the ILHC organizers to do an internet broadcast from DC, we knew that we wanted to create a unique online experience that would totally amaze everyone involved. Anyone can turn on a webcam and broadcast to ustream nowawadays.  We wanted to create something truly memorable and deeply engaging.

So I and my co-hosts from Yehoodi, Manu Smith and Nicole Zuckerman, began planning our show. Here's my breakdown on how we prepared to produce this live broadcast, how it went, and what made it special.

There were no guarantees that anyone would show up for a live internet broadcast of a dance contest.  With the ready availability of smart phones, digital cameras and high speed internet, often dance contest footage gets onto YouTube hours after the event is finished. And due to the nature of live streaming video, we weren't going to be able to push out HD quality images that could match most prosumer cameras.

Then there was the issue of timing. Since lindy hop is now a global movement, the dance contest divisions would be broadcast at times that were often inconvenient for people outside of the US.  Those in Asia would be watching us early in the morning, while the Europeans would have to catch us very late at night.

So why watch something at 480p at a specific time when you can wait a few hours and see it at 1080p at your leisure?

Despite these concerns about video quality and timing, I wasn't really that worried. I've been producing virtual events for many, many years on a variety of platforms.  I know from experience that there is a qualitative different between watching an archived video and the shared experience of watching real time video with hundreds of other people.  And I suspected that a lot of what made watching a live lindy contest in person so exciting would translate to an online environment fairly seamlessly.

To prepare for this live video broadcast, there were several steps along the way.  I don't have the time to go through all of the preparations, but basically we proceeded as follows:

To start, we estimated what was the bare minimum requirements to do a live video broadcast. This included the basic video broadcast equipment, a video streaming service, logistical arrangements like electricity and placement in the ballroom, personnel, and timing. We also set some base goals of what we hoped to achieve from the broadcast, and how we would get there.  These included the following goals:

There was some shopping involved to get the equipment we would need for the broadcast. Not only did we need to assemble the cameras, mics, headphones, switcher, cables, and more for this broadcast, we had to make sure we could actually bring everything with us on the plane.  Plus we wanted to have redundancy in case anything failed or we couldn't find what we needed in DC.

We conducted a few test broadcasts to make sure our setup actually worked, that our streaming service actually streamed, and that our audience actually could see and hear us.  Ideally we would have done a test from the actual venue where the comps were taking place, but that was not possible.

We wanted to be able to hit the ground running.  So we prepared a detailed production plan for each broadcast day.  While our actual commentary about the dancing would be off-the-cuff, we wanted everything else to be as spelled out as possible.

And of course we wanted people to show up!  So we had an outreach plan that included Twitter, Facebook, email, our website, and word-of-mouth.  ILHC itself already had its own marketing plan, and Yehoodi has well established outreach channels that we use.  Our biggest push started about four weeks out from the event, which gave people enough time to mark their calendars, but not so far ahead that it got superceded by other swing events and news.

There's a lot more that needed to get done. But this was our overall approach.

And We Are Live!

With all of our preparations, we didn't actually know if the live stream would work until we turned it on from the hotel venue at ILHC.  At around 7:30pm on Friday August 24, we went live with the video stream.  Click here to see what those first few minutes were like.

Monitoring our live stream, I was excited to see that already nearly 200 people were watching! It was working!

Manu, Nicole and I, nervously at first, began our live commentary on the first division to air, the pro-amateur division.  We did some light banter about ILHC, gave a brief introduction to the division, and then the actual dancing started.  I was monitoring the live text chat going on as we were broadcasting, which is a very weird experience getting instantaneous feedback on how you are doing.

Producing this live broadcast was a thrilling process that continued to amaze me the entire weekend. And it just kept getting better and better. Over the course of the three days, our live attendance fluctuated between 175-300+ viewers.  We had over 23,000 views of our dedicated page during that weekend.

What Made It Work

Many people remarked how being a part of the online audience was as good or even better than being there in person.  Some observed that they had "the best seats in the house" since our camera operator was following the action from his prime position facing the stage.

Some quotes from our audience:

Efrees in the text chat: "i've been trying to hover over the video and see how long is left all night…doesn't seem to sync in that this is LIVE"

Racetrack via Yehoodi: “I think this is not only a highly significant event in the Lindy Hop world, but also a noteworthy development in the realm of professional meeting/event management (special events and "hybrid" events in particular).”

Jenna via Facebook: “We loved it! I had about 25 people at the viewing party and everyone was just enamored with how awesome it was to watch a live stream of the contests!”

Many of our viewers immediately picked up on what was special about watching a live dance contest online.  People organized viewing parties in their homes — about 10-12 by our count, in places as far flung as Kuala Lumpur and Cork, ireland.  Someone even created a drinking game that the virtual viewers could play along together online, so that whenever a competitor did a particular move you had to take a sip, a gulp, or drain your glass.

That's what I love about creating unique virtual spaces like this: there are always unintended ways of interacting that people come up with.  You just create the forum, so others can innovate within it.

Another example of this was how our online audience reacted to seeing people social dancing during the breaks between divisions.  Originally we were just going to go black in between contests, showing some logos and a reminder about what was coming next. But Manu figured out how to set up another camera and just point it at the dance floor, whether or not there was a competition going on.  Of course people were just social dancing and socializing during the breaks, which our online audience could see.

Pretty soon, our viewers started remarking about who they knew on the video stream.  I would see a viewer mention a friend of theirs, then on a whim I started calling out their names and telling them to come say hi to the camera.  A very confused dancer would walk over and meekly wave.  I then told them that "Tanya from Des Moines says hi" or whatever.  This amazed the person there and the person watching remotely, which was cool to facilitate.

Our viewers would call out dance moves they wanted the dancers in DC to perform, particularly the "peck" which was one of the drinking game moves.   I would ask confused passers-by to do the "peck," which they often did automatically, causing the online audience to crack up.

There were other aspects of participating in the online audience that were unique to the medium.  We had expert panelists commentating live on the action on the dance floor, including legendary lindy hopper Steven Mitchell and well-known performers like Kevin St. Laurent and even a fashion expert, Ms. Laura "Lindy Shopper" Widley.  But the clear standout commentator of the weekend was Ms. Jo Hoffberg, who created her own bawdy, saucy persona that had our online audience in stitches the whole time. (fast forward to around the 10 minute mark for the beginning of Jo's commentary.)

Beyond our planned commentary, we had more spontaneous commentary and debate going on in the live text chat. Not only were you as an audience member able to engage in a live conversation with many other dancers while the competitions were taking place, but you also had far-flung dance pros like Max Pitruzella, Marty Klempner, and Carol Fraser participating in the chat with you. That's the kind of conversation that would be almost impossible to engage in in person, and certainly not during the actual competition.

Check out the excited text chatting during one of the most memorable performances of the weekend — Todd Yannacone and Ramona Staffeld doing a move that everyone now calls "The Elephant":

Swingjamireland: the elephant has it!

Which is not to say that being in the online audience was an improvement over being there in person.  Many of our viewers remarked how watching the online competitions made them want to actually be there in person next year:

Emily Friesen:"LOVED it! I wasn't able to make it to ILHC this year in person, but watching the stream made me feel like I could still be involved. Can't wait to be a part of the action in person next year :)"

Leaha Maria: "can't say how awesome and inspiring this was. please do this every year! I'm motivated to take more classes in my area & save my pennies for next year's event."

Alex Cloutier: "I'm so upset that I wasn't there. I'm buying my ticket for next year the moment they go on sale."

Cat Foley: "We're HAVE to hop across the pond so we can be there… so see you next year…"

It was an incredible, awesome experience putting on this broadcast for the lindy hop community.  I won't pretend that the broadcast was completely without flaws or mistakes.  There are definitely things we would have done differently, if we had the opportunity to do it again.  But overall it was it was a successful pilot that proved that (1) it is possible to put on this kind of professional quality live broadcast online and (2) there is an online audience for this kind of show.

People are already asking us not if but when we are doing this again.  Right now we are still recovering from this huge project and assessing all that happened.  If we were to do something like this again, I think we'd like to take it to the next level, in terms of technology and audience engagement.

There's definitely something exciting that we are just starting to see by bringing this awesome dance to an online audience.  Let's find out what more we can do to bring lindy hop to the world!