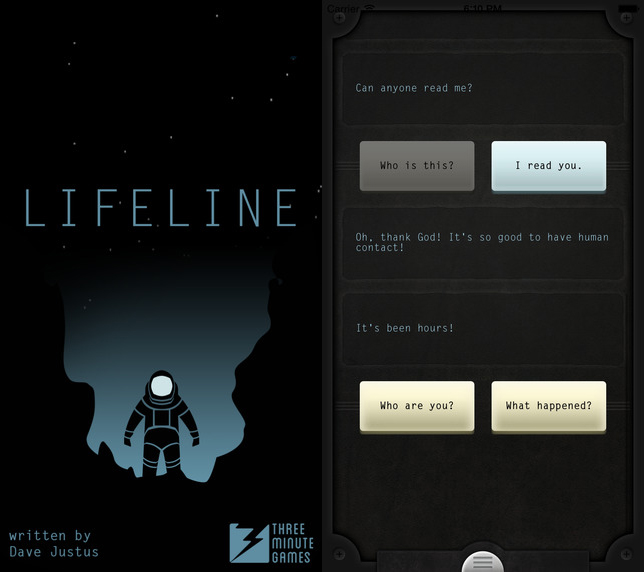 "Lifeline," a text adventure game for the iOS, has gotten tons of accolades from many sites, including BoingBoing and the Guardian, and has an average rating of 5 1/2 out of six stars from more than 4,600 players on iTunes. As a fan of "choose your own adventure" books as a kid, I knew I was going to enjoy "Lifeline" as well.

What makes "Lifeline" so amazing is the utter simplicity of its game design. There are no graphics, no sounds other than a moody, looping soundtrack, and only the most basic of interfaces. Simply put, it's a text adventure game, where the player reads a story that unfolds as short text messages, and gives the player two options for how to reply to the messages. That's it.

Oh, and the story unfolds in real time. So when the main character says, "Let me go check out this cave. Text you in about an hour," you actually have to wait about an hour for the character to reply. And when she is late, you start to worry.

The basic story is a simple one. An astronaut finds herself (or himself, gender is never specified) stranded alone on a planet, and has to survive and maybe figure out a way to escape. Basically it's a choose your own adventure version of "The Martian." Kinda.

Lifeline shows the potential for good storytelling and a strong plot in game design. Indeed, in a game without any graphics, that's really all you have is your words to convey to action, the drama, the comedy and the tension.

But what really impressed me about the game was the strategy to win. So here be spoilers if you haven't played it yet.

To win you have to be a nice person.

No seriously. To get to the resolution of the game, you not only have to support the main character in making good and sound choices (Get food from the galley! Go around that dangerous crater!), you also have to express kindness and empathy for her as she struggles to survive.

During key parts of the game, you can choose to just tell the astronaut what to do. Or you can ask her how she's doing. You can advise her to take a break or catch a breath. Or you can push her to keep going.

Now I have not totally mapped out the decision tree created for this game. But I did get to two of the endings. And in order for her to accomplish what she needs to do, she has to have the will to accomplish it. And to do that, you have to help her to keep from freaking out and do what needs to be done. Even if it kills her. (Which in one scenario it does.)

That's all I'm going to say, since even with this sorta spoiler, you still have to figure out the right decision pathway to get her to make the right choices.

I don't think I've ever played a game where I actually had to express empathy and support for another person in order to win. I'm kind of blown away by this.

I've definitely played games where you have moral choices to make, and if you chose the wrong ones (i.e. kill the bad guy instead of arresting him) you lost the game. But I've never seen a game where empathy and kindness were required to win. Are there any other games like this that people have heard of?