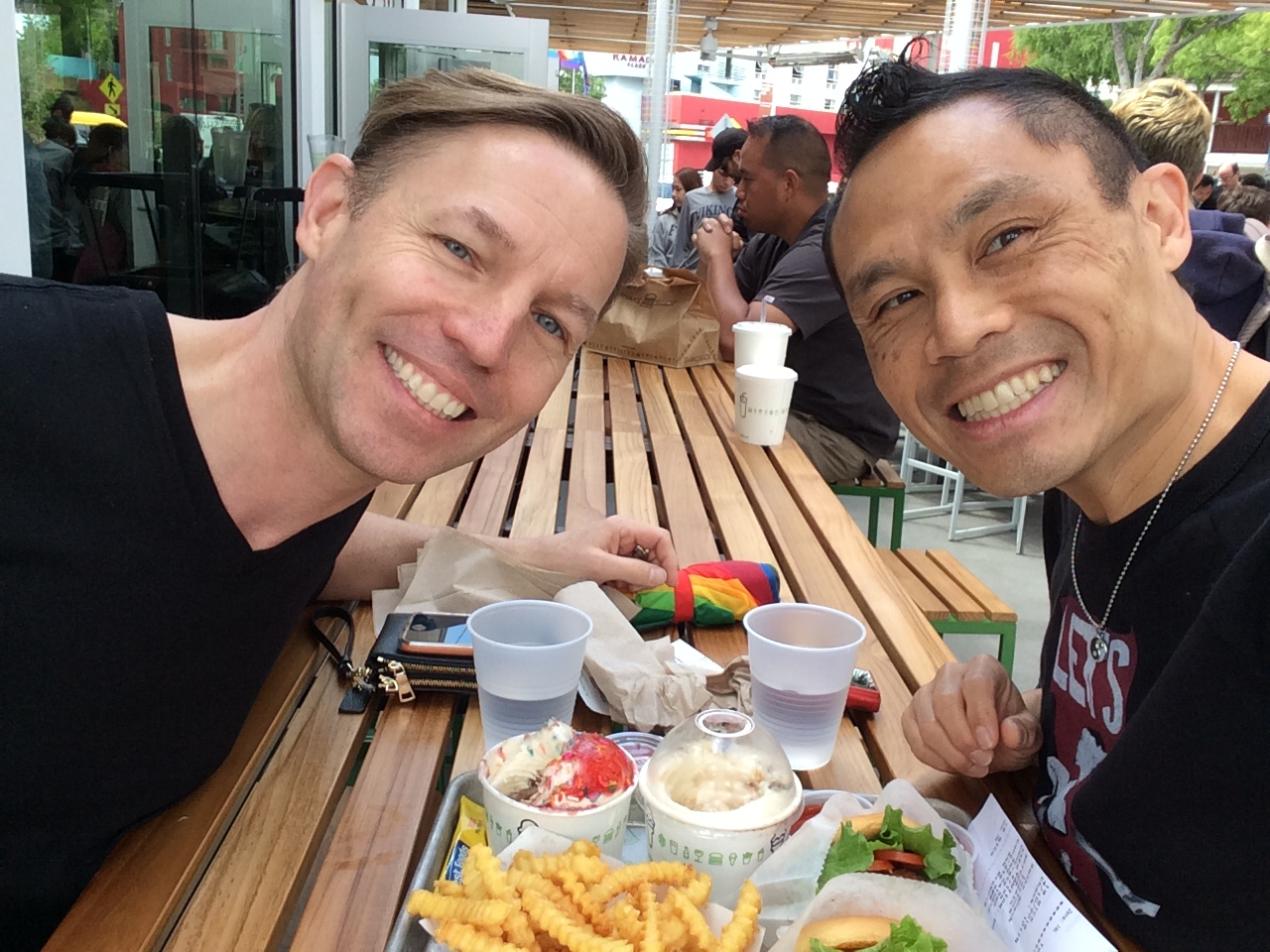 This past weekend, I got to spend time with David, one of my favorite people on the planet, doing one of my favorite things, going on foodie adventures. David, a self-described "princess" who won't wait in line for anything, was a very good sport. Basically all we did was drive around LA and wait in interminable lines until we got to eat the thing I wanted to eat. Rinse, repeat.

Here's some of the highlights of our eating adventures. 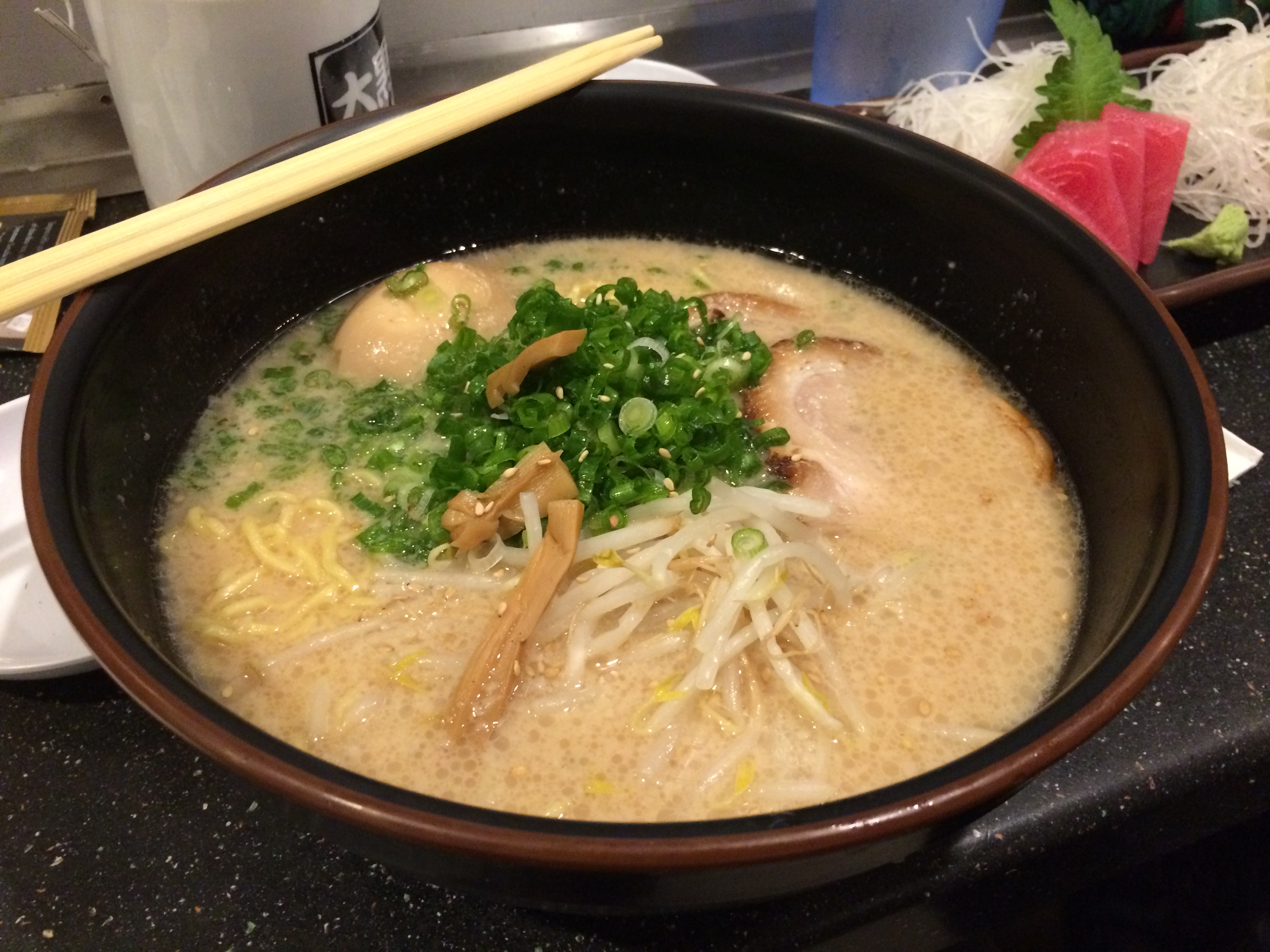 One of our first stops was Daikokuya.

Several of my foodie friends had recommended Daikokuya in Japantown for their ramen. We got there at about 5:30pm on a Saturday night, and the line was already out of control. The place has just a handful of tables and a counter with a few stools. And there was a huge crowd of people waiting to enter. Undeterred, we put our name on the list and headed off for boba tea while we waited.

I knew it was likely to be an hour or more before we got seated, so we headed to get some tea nearby. Four Leaf Teahouse just a couple of blocks away seemed like the best spot to camp out. What I appreciated most about the place was that they serve their boba teas in ceramic mugs with spoons, instead of the typical cheap plastic cups and plastic straws. The method of delivery and presentation is just as important as the quality of the food and the drink, and the cute mug definitely improved the already tasty taro and almond teas that we got. 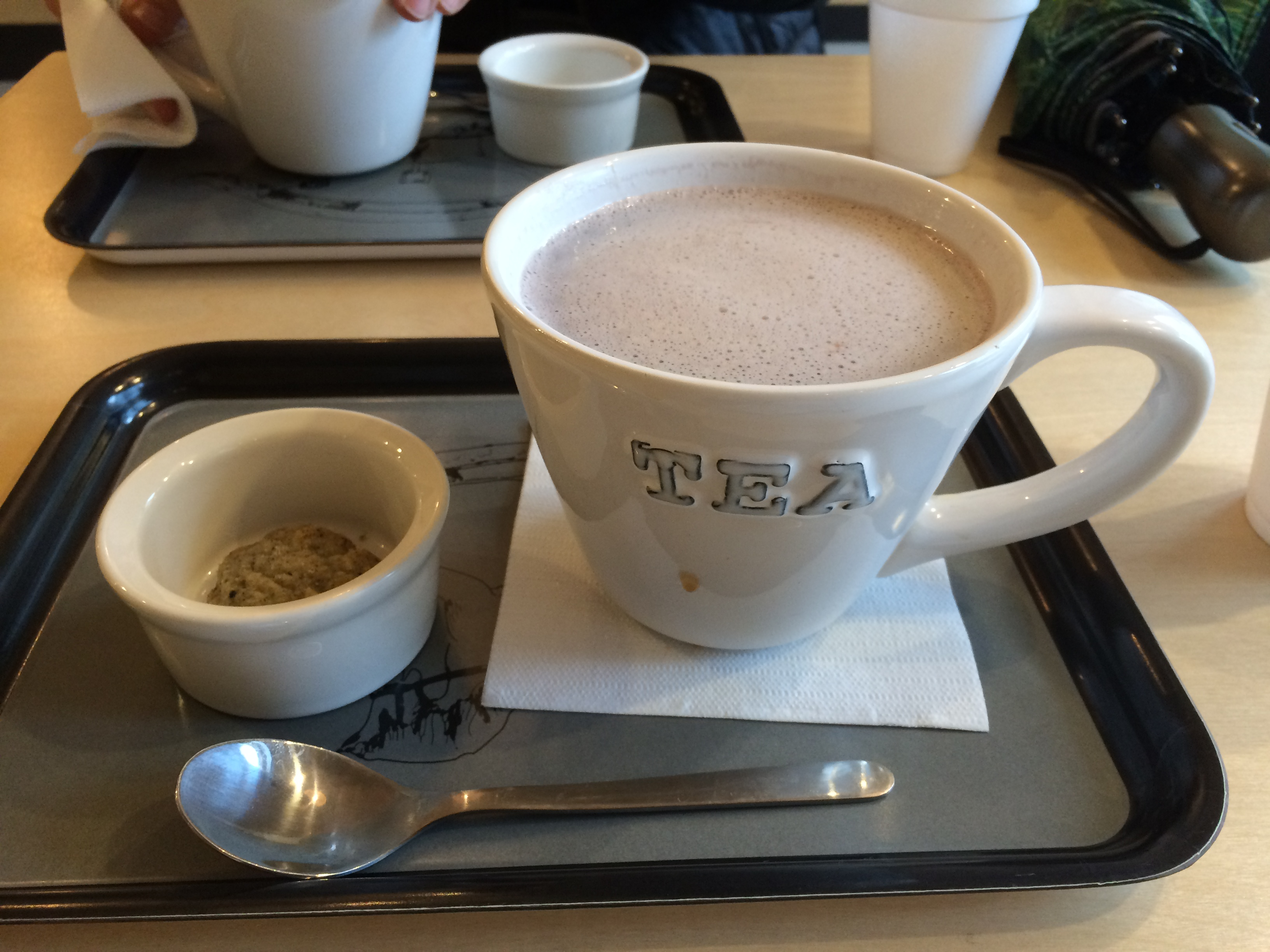 After waiting closer to 1.5 hours, we finally got seated at Daikokuya at the counter. The good news is that once you order, you food appears almost instantly. We ordered the tonkotsu ramen and the spicy miso ramen, and a starter of tuna sashimi. Both ramens were expertly done. The noodles had just enough bite to them and separated nicely. Both broths were complex and flavorful. I'm not a spicy miso fan, but I liked this version a lot. The pork was meaty with a good proportion of fat. My egg was perfectly textured with nice runniness to the yolk, while David's was a bit firmer.

All in all, a very pleasing ramen experience. David nearly licked his bowl clean, which made me happy, since we had to wait so long. And we were just getting started! 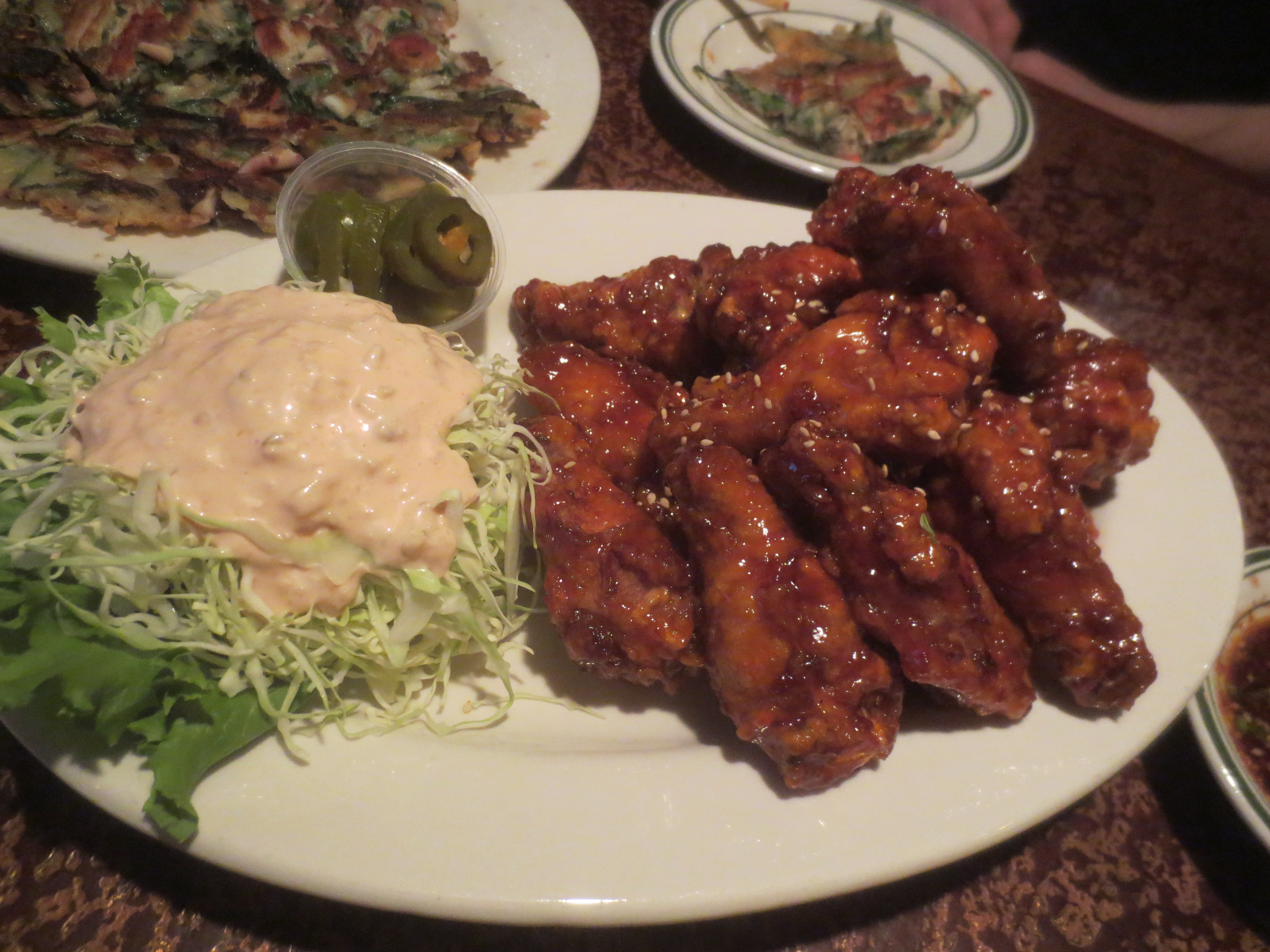 Now the San Francisco Bay Area has some of the best food in the country, for sure. But we lack in certain respects. And Korean fried chicken (or KFC as it is affectionately called by afficionados) is one dish we aren't strong in.

Neither of us knew much about Koreatown. So we ended up wandering around the neighborhood for awhile before we found a suitable spot for KFC. Some places were too loud, others had fried chicken but didn't seem to feature it, and some were suspiciously empty.

Eventually we found our way to OB Bear on West 7th Street. OB Bear looked just about perfect: a homey bar/ restaurant with several booths, an ample beer and soju menu, and a couple varieties of KFC. A little button on the table was used to summon a wait person to take care of us, which I always appreciate.

We ordered a plate of the spicy fried wings, a seafood pancake, some kimchi on the side, and a bottle of soju. The wings were spicy, sweet, sticky, crispy, and very moist on the inside — just like KFC is supposed to be. It was a daunting pile of chicken, but we managed to get through it, along with the entire pancake, and a couple of plates of kimchi.

David gave it a thumbs up, eager to return to OB Bear with his husband soon. 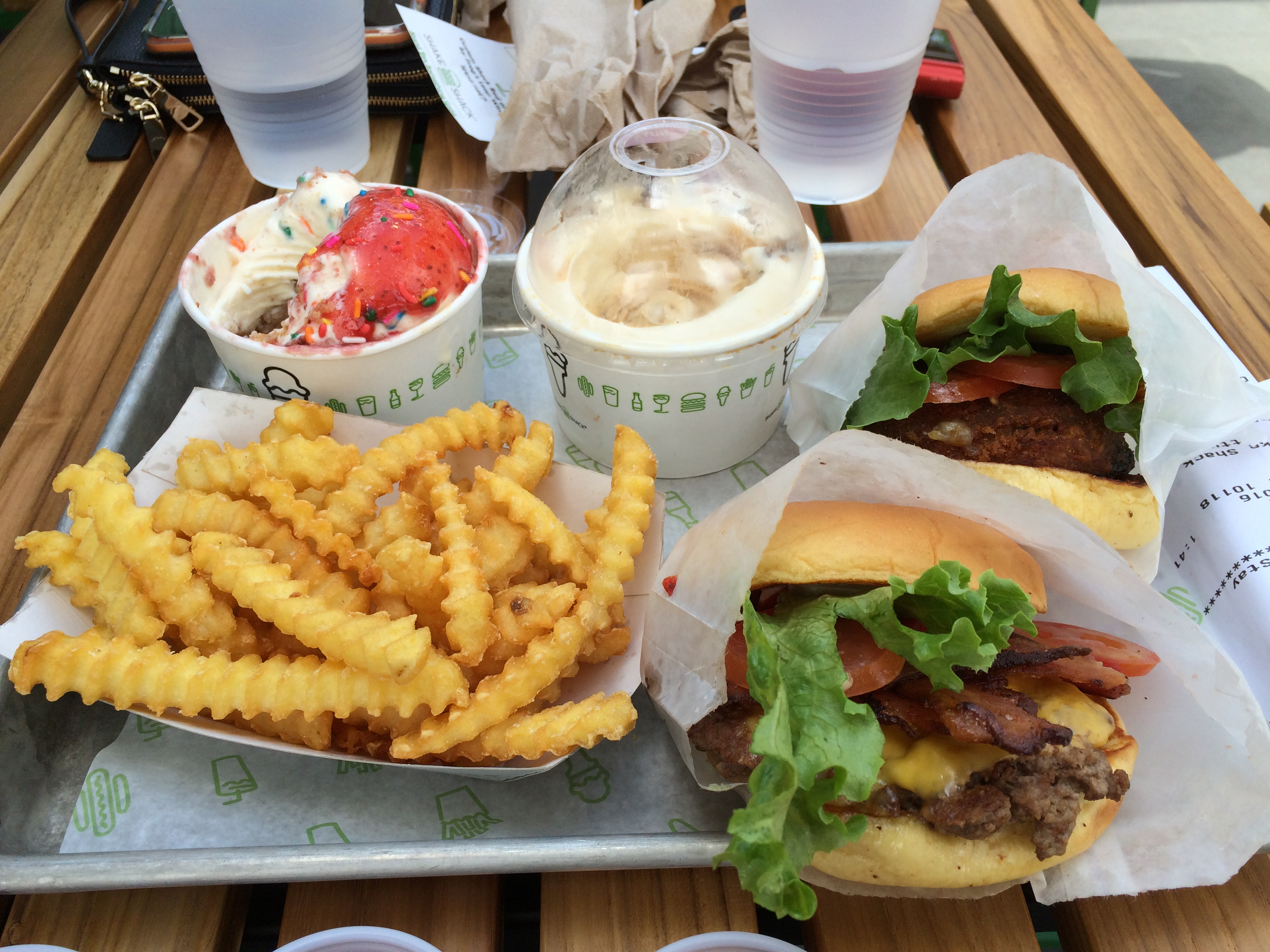 The hardest sell to my friend David was going to the new Shake Shack in West Hollywood. David tells me that when this new Shake Shack went up a few weeks ago, he would drive by and wonder who would bother to stand in line for two hours for a hamburger. When I told him that we were going to do just that, he was… less than enthusiastic.

I promised him that we would do a "drive by" and see how crazy it was. If either of us was super unenthused we would head for drinks and snacks to his favorite bar in WEHO.

Blessedly, the line was only a little ridiculous when we drove by on a Sunday afternoon, about 40 people or so. We agreed to go for it, and soon were queued up with excited foodies and tourists. The good thing about Shake Shack expanding so much over the past few years is that they have learned a thing or two about managing a queue. It wasn't long before we put in our order, and they gave us a wireless buzzer so we knew when our food was ready. Easy-peasy.

Here's what we ordered:

Everything was delicious, just as I remembered from my days in NYC. We enjoyed the "Rainbow Connection" more than the "Brownie Points" concretes, but I wouldn't say no to either of them again. The portabello mushroom was really decadent and savory, stuffed with melty muenster and cheddar cheeses.  And the crinkle cut fries were perfectly crispy and hot.

Omelette and French Pastries from Pitchoun 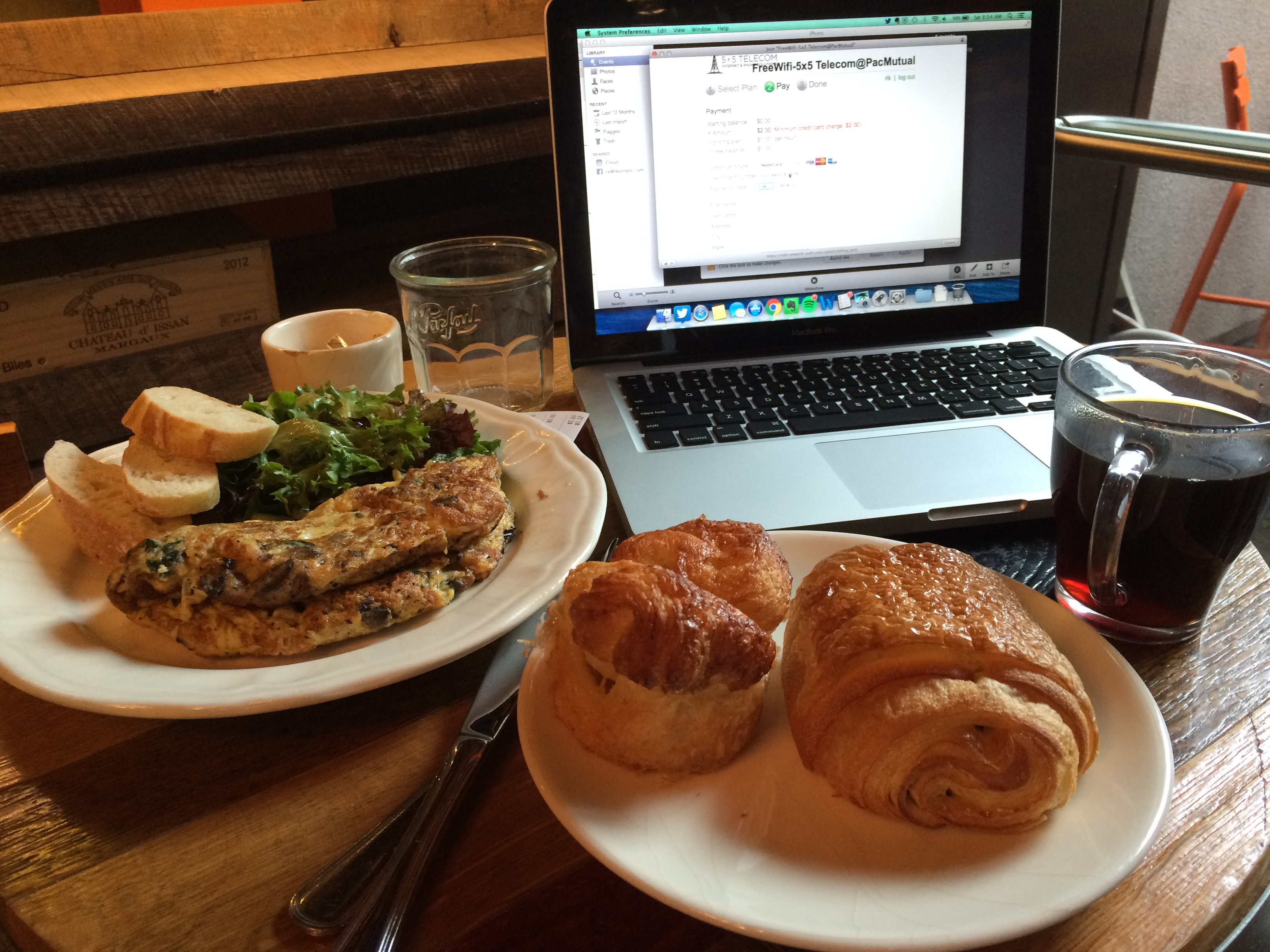 Pitchoun Patisserie in downtown LA was where I took all of my breakfasts during the week. They had an impressive display in the front of a wide array of french pastries that initially attracted me. While I was working, I kept it healthier, eating their yummy spinach omelette with a salad every morning. But on the last day, I splurged a little and got their pain au chocolat and kouign amman.

I would like to say they were amazing, but they were just pretty good. The pain au chocolat lacked the flaky consistency and airy interior of a good croissant. And the kouign amman didn't have the crispy outside I love about the kouign amman from B. Patisserie in SF.

Still, Pitchoun is a very solid choice if you are downtown and want something french and made with heart.

Another standout meal was at the Black Cow Cafe in Montrose, where we had a quick breakfast on Sunday. I didn't have strong feelings going in, since this was just a convenient stop to start the day. But I left really impressed. We shared a plate of amazing french toast made with banana bread and coated with cornflakes, served with cut up bananas and strawberries. I love french toast and I love banana bread. Such a perfect combination for a hearty breakfast.  We also shared a plate of biscuits and eggs that was very well done. I would happily come back next time I'm in town.

I've been wanting to do a foodie tour of Los Angeles for forever. I'm so grateful that my buddy David indulged me on my weekend off there. LA is an amazing place for a diehard foodie, as long as you are not deterred by traffic, long lines, and premium prices for "the best" whatever food. I can't wait to come return!