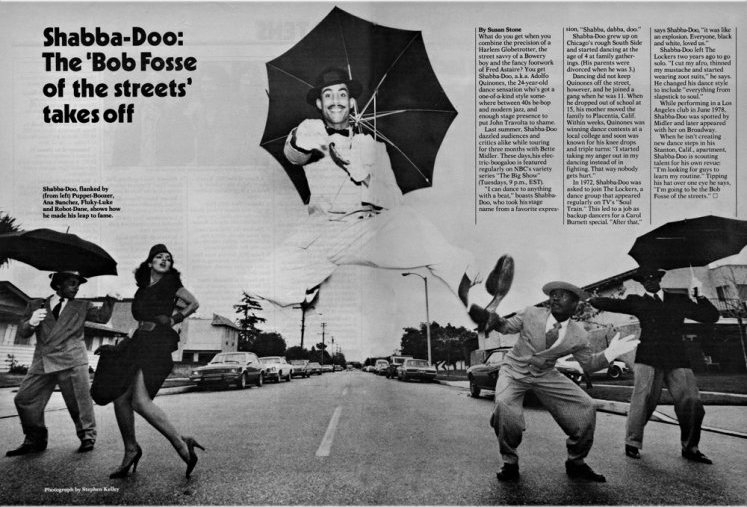 I've been bingeing on videos featuring Adolfo "Shabba-Doo" Quiñones. Most well known as "Ozone" from the films "Breakin" (1984) and "Breakin 2: Electric Boogaloo" (1984), Shabba-Doo already had an impressive dance career since the early 1970s as an original member of the Soul Train Gang and the Lockers, a foundational hip-hop dance crew before that even existed as a term.

Here's the Lockers performing over the years on Soul Train. Their showmanship is still amazing.

Now that urban dance / hip-hop dance has become part of the popular culture around the world, it's good to remember when it was fresh and just coming into the consciousness of a larger public. I remember watching Soul Train in the late 70s and early 80s, and not knowing the names of any of the dances being done, but still being thrilled by the energy, the fierceness and the charisma of all the dancers. Only later did I understand that we were literally watching locking, popping, waacking, punking, and breaking evolve on live television.

In front of it all, for a time, was Shabba-Doo.

Here's Shabba Doo returning to Soul Train, presumably after having been away pursuing other dance projects and forming a crew.

Shabba-Doo did it all. Watch this clip from "The Big Show" (1980) and try and keep up with all the styles he is throwing down. I count popping, locking, waacking, salsa, ballroom, and jazz. He makes it all look easy and has this cool reserve and sexual charisma throughout.

So I have to admit that having grown up idolizing the dancers on "Breakin" , "Beat Street" , "Flashdance" and other iconic dance movies, I was not a huge Shabba-Doo fan. I was much more into "Turbo," aka Michael "Boogaloo Shrimp" Chambers, from the "Breakin" movies. I really wanted to learn how to pop, and the more flamboyant locking and waacking style of Shabba-Doo was much less appealing.

Now I have come around 360 degrees to appreciating the more demonstrative and "showy" dance style of Shabba-Doo. We needed a dancer like Adolfo with the good looks, charm and style to win over audiences new to that form of movement.

Adolfo, and many other peers of his generation, paved the way for more mainstream appreciation for many street dance forms that we get to benefit from today. We all owe him a debt of thanks for that.