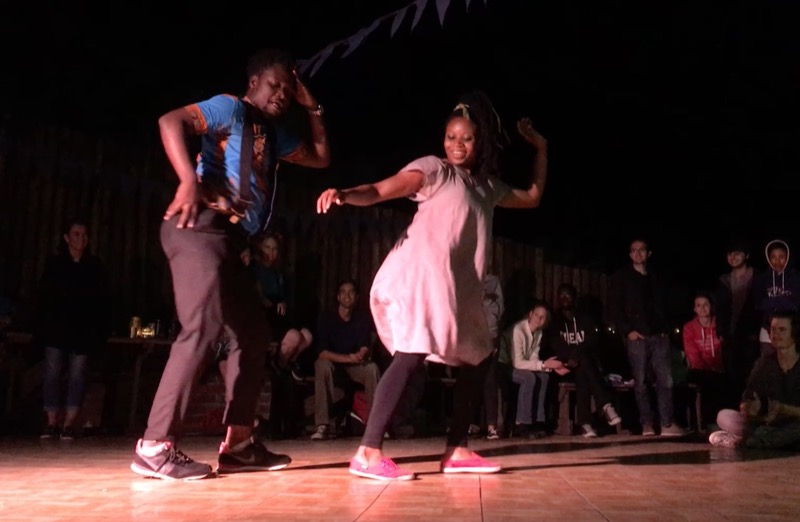 My main inspiration for coming to South Africa at this time of year was a dance camp going on in Cape Town called Mother City Hop. Last summer, I met a Swedish woman in Herrang who kvelled about what a great event Mother City Hop was. So I did some research into it and it seemed like a great excuse to finally visit Africa.

Mother City Hop is a weeklong dance festival set in the beautiful coastal city of Cape Town. Only in their second year, the organizers have put together a nice mix of dance classes, dance parties, special “taster” dance workshops, city tours, and social outings that make for a fabulous time, no matter what your interests are.

Here's some of the awesome dances that I participated in while in Cape Town.

Pantsula is a local South African dance form I’ve been interested in for awhile, after seeing a music video featuring a couple of dope Pantsula dancers. Elvia and Nathi are local South Africans who taught a super fun Pantsula taster class during our visit to the Langa Township. Here’s them doing a demo on the first day of the festival.

Being in a black township, learning a local African dance was one of the peak experiences of my entire trip. The dance is so joyful and fun, and they taught it with infectious energy.

Pantsula, we were taught, came out of township fashion and showing off what you were wearing. It later evolved into a form of dance, alternating between dramatic poses and franticly fast and intricate footwork. Many of the moves are associated with particular actions, like putting on your shoes, going to town, having a meal, even running from the police.

As a solo jazz and urban dancer, I got so much inspiration from Pantsula. I'd love to learn more!

Gumboot is another local dance that was created by workers in the South African mines, who wear heavy rubber boots or gumboots for protection. More than just a dance, it was also a form of communication. You could express your feelings about the foreman, or ask your mate to get you a cup of tea, just by slapping your boots in a particular pattern.

We had a blast learning a short gumboot routine from Elvis and Nathi and then performing it together. There is just something so joyful and primal about combining percussive slaps, claps, stomps and steps together that I want to do more of.

Here’s a video showing a professional dance troupe performing gumboot the way it's meant to be done.

We also learned Mozambican dance from Maputo-based dancers Eugenio and Judith. Hanah and I actually did two hours of classes with them, which nearly broke us honestly. So much kicking, jumping, and flamboyant arm movement! I loved learned this African dance form, which always is so challenging and inspiring.

Many of these dances tell stories. For example, one of the Mozambican dances told the story of how local peoples relate to the trees. During the dance, you cut down trees, harvest the wood, use the wood, and replant new trees. Through the dance, they demonstrated how local people expressed their appreciation for nature.

Here’s Eugenio and Judith doing a demo of Mozambican dance during the first day of the festival.

By the way, Maputo has their own swing community and dance festival in the spring. Dreaming about coming next year!

Of course, we were also there to lindy hop! Being in Africa and dancing lindy hop with people from 20 countries was a unique experience. We danced in some beautiful venues, from a private Italian club to a steampunk bar, a beachside bungalow, and a posh club by the ocean at the end of an industrial pier. Here’s a swell lindy hop demo done by the instructors at Mother City Hop.

We saw lots of other dancing throughout our time in South Africa. Here are some dope kids busking in Cape Town outside of a McDonalds. Yesssss!

There’s something wonderful about traveling the world and meeting and connecting with dancers who share your passion and excitement about music and movement. There’s nothing like it.

“We need to collaborate soon,” Elvis, one of the pantsula dancers, posted to my Facebook wall recently. I hope so!

[Read more about clubbing in Joburg the week before.]