Last weekend I organized the second annual San Francisco Kouign Amann Tour. When I put out the word that I was organizing a tour, there was a huge burst of enthusiasm and related emoji from my friends. In the end, we had a hungry group of eight pastry-nerds assembled.

But where to go? Last year, we were very pleased by Craftsman and Wolves and b. Patisserie, so of course we had to go back to both of those bakeries. I added Le Marais to the list because I had had some good experiences there.

We started at Craftsman and Wolves in the Mission on a sunny Saturday morning.

Last year's trip there was largely positive. It's a beautiful space, with artistically presented, creatively-conceived pastries. But folks were a little disappointed with their famous "The Devil Within" savory muffins. While they were very tasty, the key ingredient is the quail egg on the inside, which has to be cooked but runny. Most of ours were too firm. Still delicious, but not amazing.

This year, the "Devil Within" muffins we ordered hit it out of the park. A perfect balance between the doughy muffin, the runny egg, and the salt on the side that your sprinkle on every bite.

But of course, we were there for the kouign amann. They had two varieties that day, a plain and a mocha version. 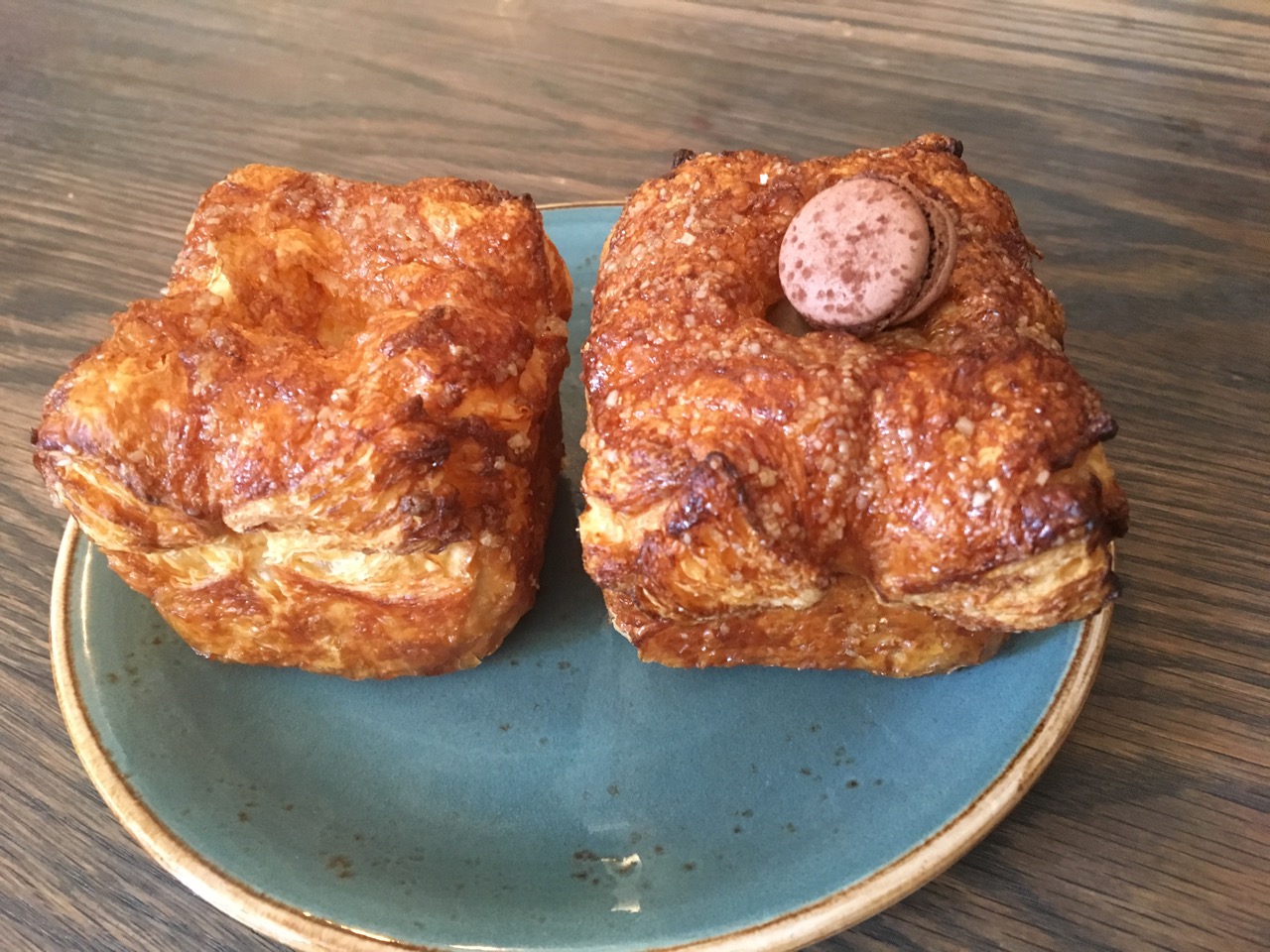 I would say that the plain was just fine, crispy outside, soft and layered inside. Nothing spectacular.

The mocha was really delicious though. The mocha filling was just the right amount of sweetness and coffee flavor, without overpowering the rest of the pastry. Nicely crisped on the outside. Very well done.

Then it was off to Le Marais, a few blocks away. It was a beautiful morning for a walk in the Mission, and a nice break in between sweets.

Unfortunately, Le Marais was out of kouign amann for the day. Reportedly, the flavor of the day was caramelized apple, which would have been a lovely contrast. Ah well, another day, another pastry. It was honestly the underdog on our list anyway.

So we headed off to the Mecca for kouign amann, b. Patisserie in Pacific Heights. Most of us had been to b. Patisserie several times, so we knew what to expect. But it was my friend Diane's first visit, so I was excited to see her reaction to her first b. Patisserie pastry. She seems pleased. 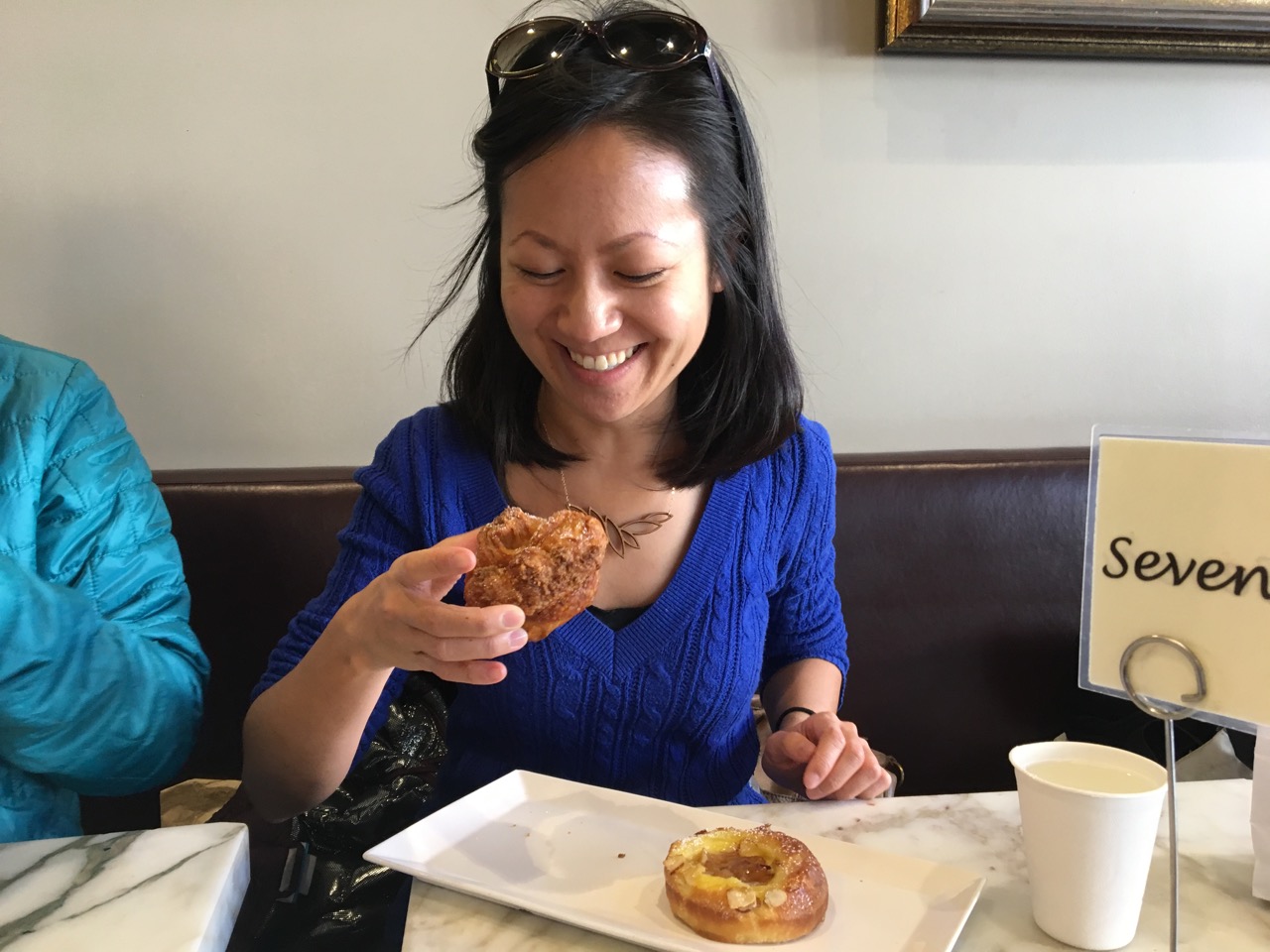 The special that day was a cranberry-pear-pecan kouign amann. I admit to being sad that they didn't have a more seasonal variety like peppermint chocolate or speculoos. But I was confident it would be excellent anyway.

Here's a flight of the three varieties they had that day: cranberry-pear-pecan, plain and chocolate. 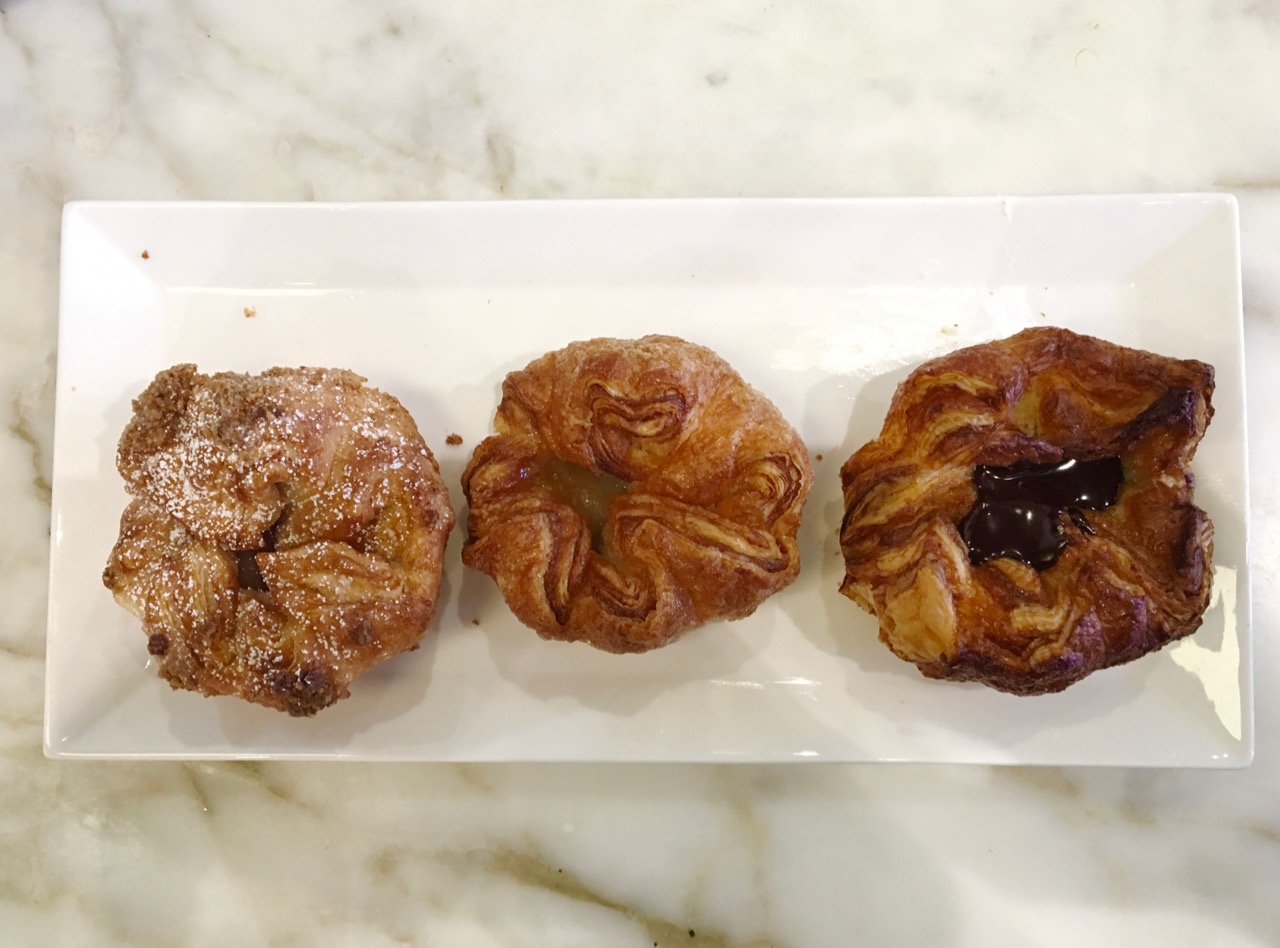 Here's what it really looked like with all of us taking food pics. LOL. 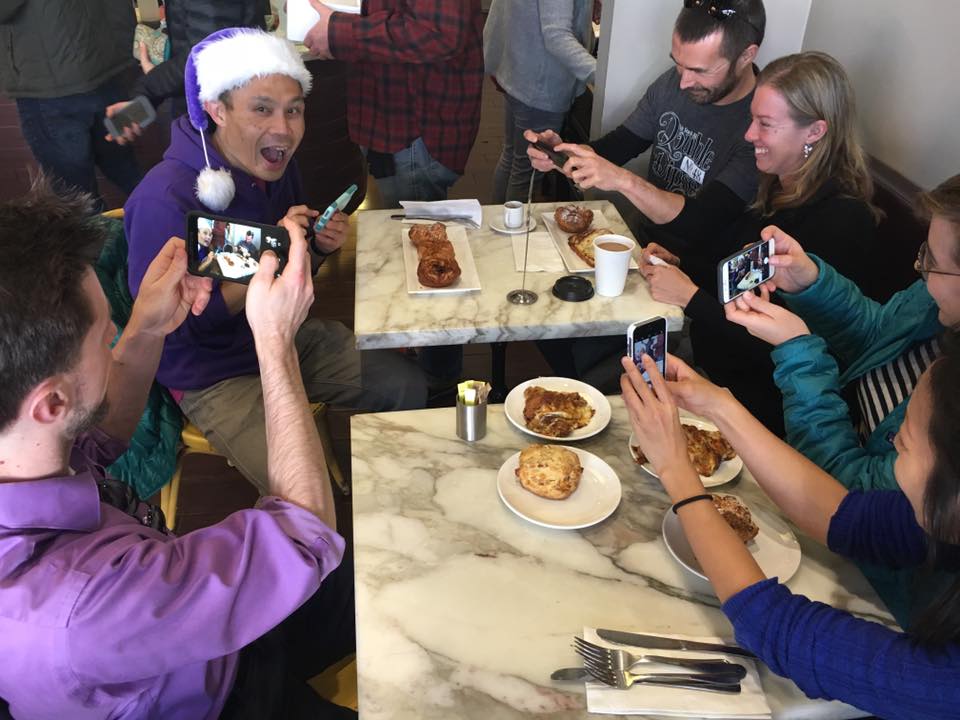 As always, the quality of the pastries at b. Patisserie is unmatched. I was not blown away by the cranberry-pear-pecan version. There was no distinct flavor profile that came through, just a general jam-like sweetness. Still very tasty.

I preferred the "plain" kouign amann, which just perfectly balanced between the crispy exterior, the layers of dough inside, and the sweet sugar filling.  Really, there's nothing plain about it.

All in all, a very pleasant outing with my friends to some of my favorite places doing one of my favorite things: eating fresh pastries. This is what life is all about. I'm a lucky bastard, for sure. 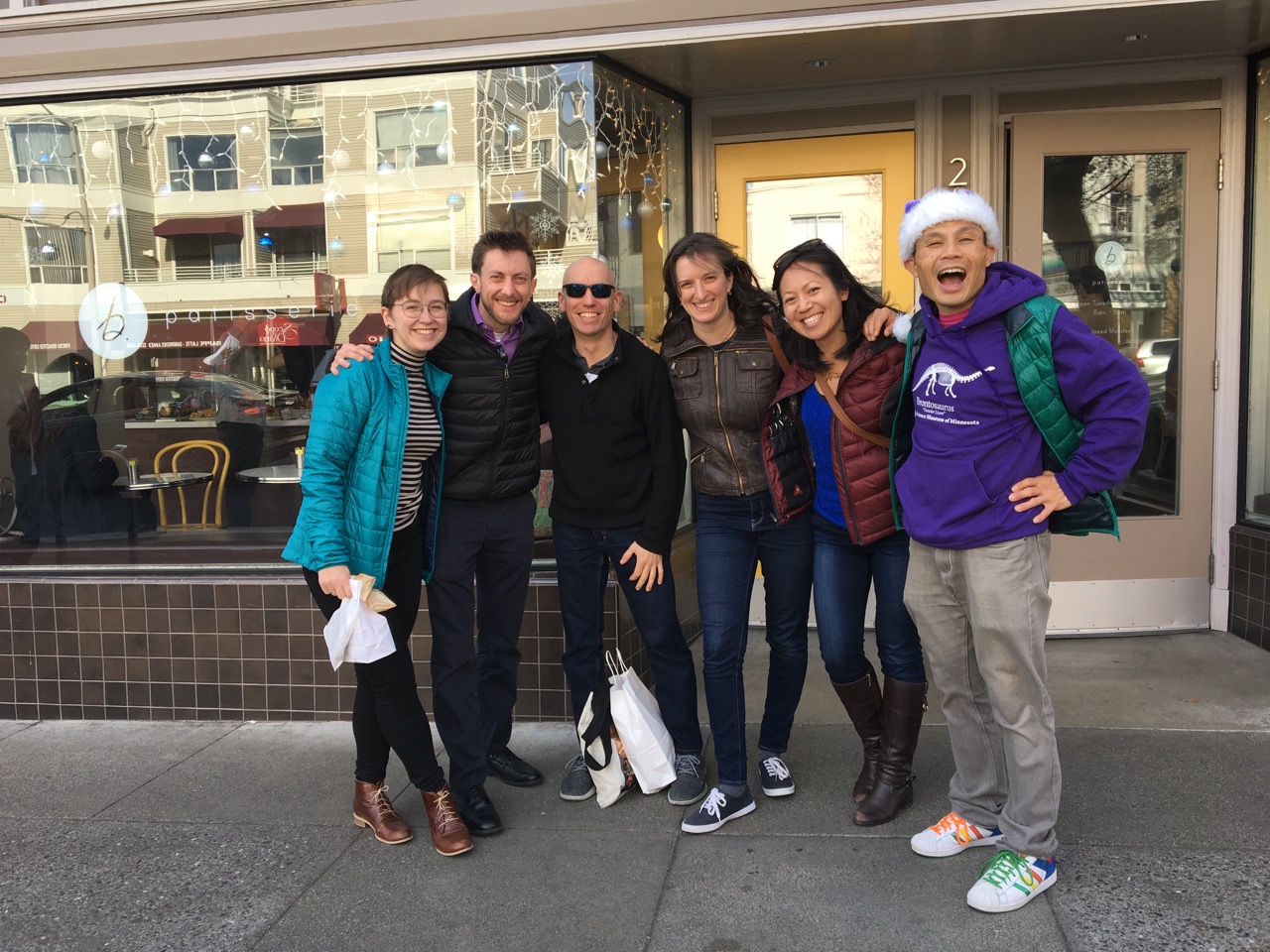 I'm honestly not sure how to top this for next year. I think it would have to be… a trip to France to try kouign amann straight from the source. Hmmm.