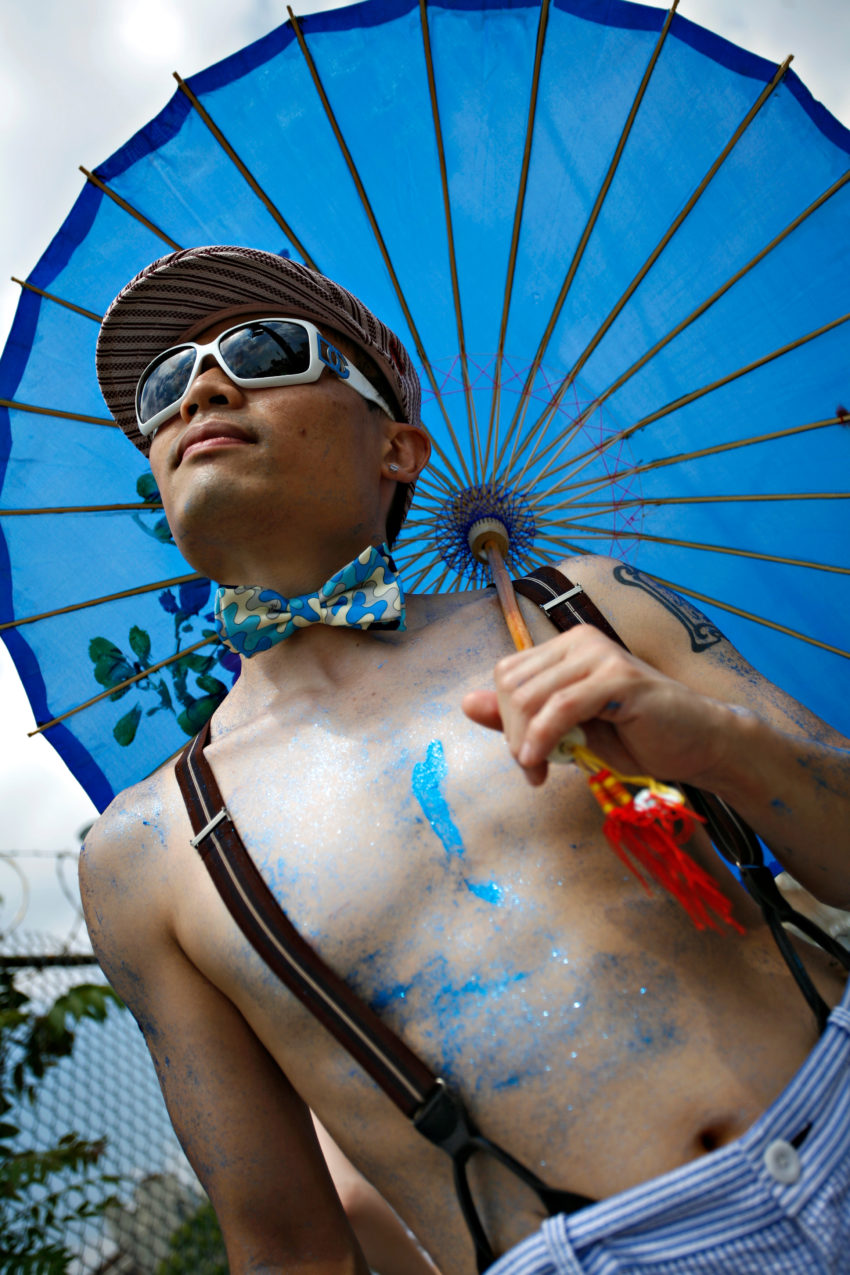 Finally home after an amazing day of Mermaid Parade festivities.  As has been our tradition for going on eight years, a bunch of swing dancers from Yehoodi march and dance in the Coney Island Mermaid Parade, calling ourselves the “Brooklyn Bombshells Revue.”  We all dress in something either vintage-y or mermaid-y or both.  I.e. 1920s style bathing suits, sailor outfits, etc.

My costume this year was fairly, uh, minimal, as you can see here. Basically seersucker pants with matching pasties, a purple cap, rockstar shades, a bowtie, and lots and lots of blue glitter. (I think I’m going to find the glitter all over the place for weeks.)

This year I got more photographer attention then I have ever received, which was fun.  It’s sweet to have random people stop you on the boardwalk and ask to take your picture, and then have a dozen other people crowd around to take more.  One of the few times of the year that New Yorkers actively go up to each other and admire each other.

I remember past parades when we had barely a dozen people doing the routine, using an old amp attached to a Red Rider wager.  Ah the good old days.

This year we had close to 40 performers, plus another 15-20 supporters cheering us on and passing out goodies to the judges.  Many of whom had never been to the Mermaid Parade before, much less performed in it.  I can’t imagine what it would be like to have this be my introduction to the Parade, since I had attended the parade for a few years before ever being in it.

Because our group won the parade last year, we had the honor of leading off the festivities this year. We go to perform our awesome routine two times, once in front of Nathan’s and again in front of the judges reviewing stand.  I’m proud to say that we just killed it, wowing the crowd and hopefully pleasing the judges.  I’m not a competitive person, but it would be awesome if we won a second year in a row!

Sadly, the parade was over very quickly for us, since they basically rushed us through the street and dumped us fairly abruptly at 10th Street and Surf Avenue barely 40 minutes after we started. The large majority of the marchers had not started the parade by the time we had finished!

Plus the crowds were so intense around the boardwalk that we couldn’t even really get out near the water to enjoy the beach.  We ended up hanging out on the sidewalk near the aquarium, which was a fairly anticlimactic way to end the parade.

That’s what happens when something gets too popular in New York, I guess.

More satisfying was going to Flatbush Farms in the evening with fellow marchers and friends.  A large crowd of up hung out in the backyard, eating cheap BBQ, drinking, and sharing stories about the parade with each other.  It was a lovely night, and a relaxing way to end an amazing day.  My buddy Arthur gave me a much needed massage that just transported me.

I’ve got some video uploading now, plus lots and lots of pictures taken by friends that I’ll post links to once they are available.

1 thought on “A glorious day at the Mermaid Parade”