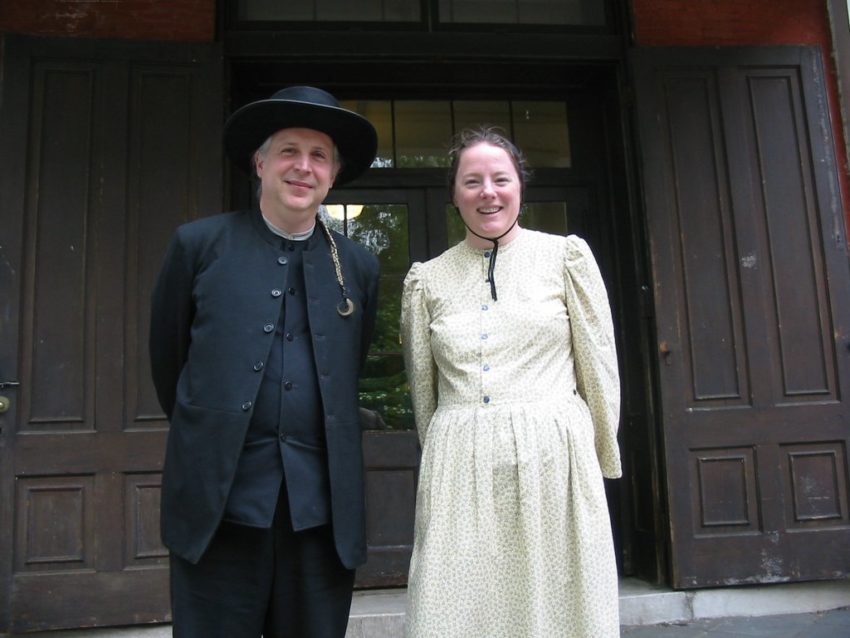 And now a little wrap-up after the silly Quaker MMORPG hoax I perpetuated over the couple of days.  For those I fooled and are miffed about it, my apologies.  It was only meant in good fun, I assure you. My intent was simply to riff on the announcement earlier this week of a new virtual world for Muslims, which was widely panned on the tech blogosphere.

It was fascinating to see my post make its way around, from Gamepolitics to G4TV , The Escapist, ArsTechnica, and several more places on the Interwebs.

Only one person saw fit to check my sources (which were made up) and comment on my blog about it. Another reporter IMed me to ask me straight out to ask me if it was a hoax, which I fessed up to immediately. At least one prominent tech news site editor was so put out he will no longer link to my posts. Oh well.

Most people took the posts at face value, despite how ludicrous I thought I made them sound.  I guess it’s been awhile since I’ve done a hoax post ( “ICANN announces that it now controls the virtual world as well as the web“, “easyJet chief announces new low-cost, no-frills virtual world: easyLife” ), so it caught my readers unawares.

Some people got the joke and were riffing on it:

The Amish community was supposed to make an announcement today as
well… Is anyone going to be in PA so they can hear the spoken word announcement? Supposedly they’re working on a board game similar to mousetrap, strings and pegs all over the place, simulating everything from a barn-raising to churning milk. Should be exciting, they’ll also have barn babes at the Creams and Ewe Show held annually in the heart of the Village of Intercourse in Lancaster County, Pennsylvania. That’s also known as the CES for those of us in the know, can’t wait!! I hear Eicher-Albrecht is going to be showing off a new butter churn this year…

I want to see an MMO based on Amish people now. Or maybe a convent? How about an MMO where you become a monk? There’d be no in game economy since everyone would be poor, and no pesky worrying about customizing your look since everyone’s wearing that same stylish brown robe.

A number of folks actually seemed enthused about a Quaker MMORPG, which surprised me the most.  I think the idea of a MMOG that doesn’t rely on killing to advance has a certain appeal to parents and some gamers:

A post about Quakers? I guess I have to reply to this one. All I can say
is this is the first I have heard of this. I will of course have to check it out if it is released.

Quakers have such a “cooperative” and “inclusive” religious message that I really can’t decry them their desire for pacifism and cooperation in the face of all this violence in gaming. It’ll probably suck though, just saying.

I love Quakers. They’re brilliant. I dunno if PeaceCraft is real, but it’s totally something I could see them doing. If it’s free, I’ll play it (as a joke, though).

You ever met a Quaker? They don’t go around trying to convert you, which is a nice relief. This game will most likely never be heard from again, after being sued back into the dark ages by Blizzard for the very close similarity name-wise to WoW. Shame really.

Sounds interesting for those who want to follow the path of a less violent oriented (maybe) MMO. For those who won’t play the WoW or other MMOs because of the violent content, can’t hurt. As long as they keep in mind that a large majority of MMO players are more interested in the traditional MMOs, they should be ok.

Normally I raise an eyebrow and get worried when I hear about Christian “values” games,.. but in this case, while I agree it is doubtful the game will go anywhere or get much of a playerbase, the Quakers have to be the least worrying group trying to create such an alternative I have seen to date.

They have a nice long history of trying to do positive things.  At least THIS game will have something well meaning behind it rather then these bigoted hate-filled-pretending-to-be-holy games we usually see coming out of ‘moral’ game development.

As a quaker, I hope this game is well constructed and accurately portrays one of the most positive and peaceful sects of Christianity. As a gamer, I have no idea how this will be possible.

Of the various early-american-history-founded religons, the Quakers pretty much come out on top as far as being rather sensible. Not to suggest that others are nonsense religions, but my limited exposure to the friends has jived well with my largely non-theist leanings.

As far as an MMO, it could be interesting if not action packed.

Honestly, while I was composing the posts, I did find myself sincerely thinking about how I would translate the message and history of the Society of Friends into a game motif.  What would be the different levels?  How would points be tallied?  What would the objective be?  How do you win?  Not exactly a normal way of thinking about the life of the Spirit.  But a useful train of thought for me.

So I entertained myself, hopefully amused a few others, and didn’t ruffle too many feathers of those I punked.  Thanks for playing!

3 thoughts on ““…. and scene”: wrap-up of World of Peacecraft hoax”