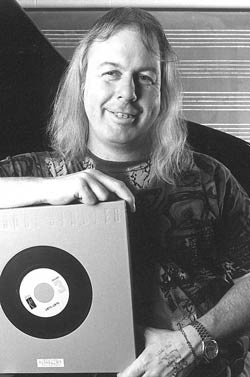 On the last day of the Swing and Soul weekend in Atlanta, I had the pleasure of attending a lecture by musicologist and historian Rob Bowman talking about the history of the Stax record label. Rob has basically spent a good portion of his life devoted to chronicling the story of Stax, a legendary soul music recording studio that produced hit after hit in the 60s and 70s and was a potent symbol of racial integration during the civil rights era.

Rob Bowman took us on a journey back to Memphis in the 60s, which was like so much of America a racially divided city.  It was a white Tennessee banker and country musician named Jim Stewart who started in 1957 what became a powerhouse of soul music, producing records by Isaac Hayes, Otis Redding, the Staple Singers, Wilson Pickett, Luther Ingram, Albert King, the Bar-Kays, and Booker T. & the MG's.  Rob explained to us in riveting detail what made the Stax sound so unique — from the layout of the recording studio, to the talented and racially integrated sidemen, and the Stax emphasis on "process" over "package."

Rob is a great storyteller, jumping around and waving his arms as he enthuses about the music produced by Stax.  It''s wonderful being in the presence of someone who has found his life's calling and passion and wants to share that with you.  And listening to him provide live commentary on an Isaac Hayes or Otis Redding track was a wonderful way to learn to appreciate more deeply the craft and artistry involved in producing these amazing songs.

If you don't have the opportunity to see Rob lecture, you can read his book about Stax Records called Soulsville USA, available from Amazon.com.  Looks like a riveting read for anyone interested in African-american music and political economy.