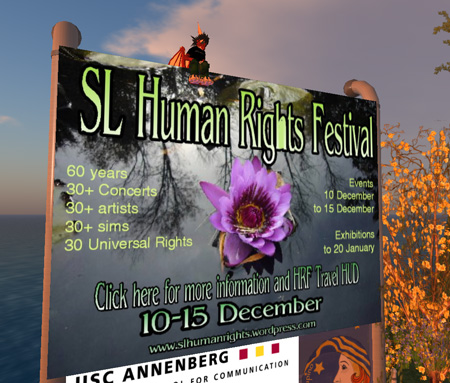 The 60th Anniversary of the Declaration of Universal Rights is being celebrated by a huge festival in Second Life. More than 60 concerts mark the 60 years and the talents of 100 artists and musicians are part of the celebration. More than 30 sims reflect the 30 articles of the UN Convention. The festival is the first time a themed programme of events on this scale in Second Life has aimed at raising real life issues. It draws on the talents of artists, musicians and campaigners from many different countries including Argentina, Cyprus, Denmark, France, Germany, Italy,  South Africa, Sweden, the Netherlands, the UK and the USA.

Global Kids' International Justice Center will be hosting jazz artist Louis Volare at 7PM PST tomorrow as part of the Festival.  Click here to teleport to the event.

For more info, head to http://slhumanrightfestival.wordpress.com .  The full press release continues after the jump….

Some well know SL musicians are headlining the festival including:

Artists whose work will be displayed include:

There will also be talks from Ghana, Switzerland, Poland and the UK, poetry slams and stand up comedy.

The UN Convention sets out the universal rights of all humanity. However as well as a celebration, the festival is also designed to raise rights that are breached – the right to free speech, a fair trial, shelter, rights of women and children to be free from violence etc.

The opening of the Festival includes a live interview from Paris with Draxtor Despres (Bernard Drax). He has just been awarded a "Every Human has Rights" Award for his machinima on the Guantanemo Bay build "Gone Gitmo" by Nonny Writer and Ping Rau explained " Virtual Gitmo is the prime example how an immersive environment, which has the power to collapse geographies and enable communcation in real time across cultural boundaries, can help people engage in important issues concerning human rights." He will be speaking about the award and plans to bring other awardees to the discussion at Angel's Nest at 8am SLT on 10 December. Then a concert by Jaynine Scarborough will launch the full programme of music with 12 concerts in the festival (including 3 at the Amnesty International sim) and other events around SL.

One of the leaders of the festival,  musician Junivers Stockholm, has been appointed one of the musicians for the  Amnesty International Small Places Tour.  This is inspired by Eleanor Roosevelt's words "Where, after all, do universal human rights begin? In small places, close to home – so close and so small that they cannot be seen on any maps of the world. Yet they are the world of the individual person… Such are the places where every man, woman, and child seeks equal justice, equal opportunity, equal dignity without discrimination. Unless these rights have meaning there, they have little meaning anywhere. Without concerted citizen action to uphold them close to home, we shall look in vain for progress in the larger world." This is the first time Second Life has been the venue for concerted citizen action to highlight human rights across the world.

Junivers and activists Any1 Gynoid and Medora Chevalier  explained that they are really excited about the growth and power of the festival plans.

Junivers Stockholm said: "Wow, this is growing! Person to person, network to network – the connections grow and we'll build on them to back actions for humanity now and in the future."

Any1 Gynoid said: " We have an awesome array of SL's finest talents backing the festival. Everyone says yes, they want to stand up for human rights. This is going to be a festival to remember! Woot!"

Medora Chevalier said: "There is a new mood of optimism spreading around the world. We no longer need to be divided. We can act and campaign together, as humans caring about humans, sharing solutions, making change happen. The connections made in this world make ripples spread across the world to strengthen human rights."

There are a range of good causes in Second Life associated with the festival. These include Amnesty  (featured on 10th), Uthango™ a social enterprise based in South Africa (featured on 11th), Keep Kids Safe/DrivebyAgony (featured on 13th), Peace Train/Twilight's Peace (featured 14th). Many others are featured in the sims visited for concerts or exhibitions during the festival.

The Festival started with an idea at discussions following Carp's the Rings Rock Opera, which raises social justice issues using music and drama. The performance of the Rings on 14th December at NMC Labs will be the last for some time as a break is planned. It has been featured on the popular SLTV  programme "Tonight Live with Paisley Beebe."

Festival details are shown in the notecards below; on http://slhumanrightfestival.wordpress.com, on the Festival Travel HUD available at Angel's Nest (click here to teleport) and at many many other supporting sims throughout SL.

For more information contact by IM in Second Life Junivers Stockholm,  Medora Chevalier or Any1 Gynoid.