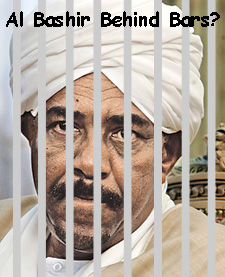 In a historic development, the International Criminal Court in the Hague has issued a formal arrest warrant against Omar Hassan Ahmad Al Bashir, President of Sudan, for war crimes and crimes against humanity.  Specifically he is charged with "intentionally directing attacks against an important part of the
civilian population of Darfur, Sudan, murdering, exterminating, raping,
torturing and forcibly transferring large numbers of civilians, and
pillaging their property".  This is the first time a current head of state has been indicted by the international tribunal.

What does this practically mean?  There is no international police force that has jurisdiction to enter Sudan and arrest Al-Bashir.  And the government of Sudan of course is not going to turn over its head of state to the ICC.  But it does place a legal obligation upon all of the 108 States Parties to the ICC treaty to turn over the Sudanese president if he travels to their territory.  Thus if Al-Bashir leaves the country, he may be subject to arrest and extradition to the Hague.

I hear the ICC jail is quite lovely, with a view of the North Sea.  Hopefully Al-Bashir will become well acquainted with it very soon.