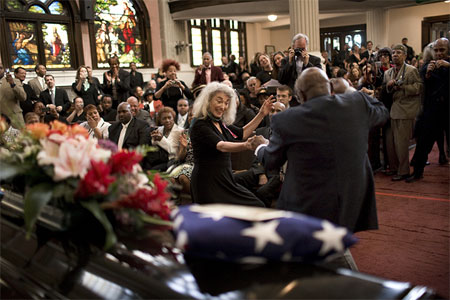 For those that were not able to attend Frankie Manning's funeral service earlier this month, there will be a Memorial Service for Frankie on Friday May 22 as part of the Frankie 95 Birthday Festival.  The service will take place at 10am at the Fifth Avenue Presbyterian Church (Fifth Avenue at 55th Street).

Open to the public, seating is on a first-come first-serve basis.  We expect at least a couple of thousand lindy hoppers and fans of Frankie to be in attendance, so get there early!

Full announcement after the jump…

Seating is on a first-come first-serve basis.

For those wishing to send flowers and cards:

PHOTO CREDIT: Dancing in the aisles at Frankie Manning's funeral by Ralph Gabriner