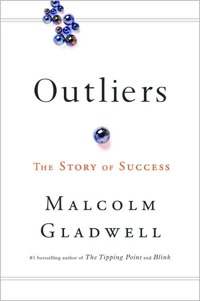 I recently read Malcolm Gladwell’s new book Outliers , a fresh perspective on genius and success. Gladwell's central aim is to challenge the notion that individuals who are at the top of their field got there by sheer talent and hard work. He argues convincingly that there are number of external factors outside of the individual’s control that shape whether or not she are going to succeed or not.

He cites the example of Bill Gates, one of the richest people in the world who led the development of the most successful computer operating system of all time. While Bill Gates is certainly a gifted programmer, he had very unique access to computer technology from an early age due to the community that he grew up in.

Bill Gates had the opportunity to spend the 10,000 hours needed to refine his craft (computer coding) in high school and college. Across the board, Gladwell argues that expertise in any field requires at least 10,000 hours of practice to get to the highest level of achievement. This applies to athletes, musicians, and scientists across the disciplines.

Gladwell asks what holds poor people back from become successes. In his view, you have to change the environment that surrounds individuals to facilitate their development, rather than just focus on the individual. You have to examine the family structure, the surrounding culture, and the child’s peers if you hope to effect the trajectory of her life. And most importantly, you have to give them the freedom to put in the hours and hours of work it requires to get to the highest level of their field that they could possibly achieve.

This is an extremely tall order, one that challenges our approach at Global Kids, and many other youth outreach programs like ours.

Toward the end of his book, Gladwell looks at KIPP Academy, a local school in New York City that is transforming urban youth into success stories through radically changing their orientation toward school and academic study. KIPP students learn in an environment where focus, hard work, and self-respect are emphasized and reinforced. The result is dramatically higher educational achievements by KIPP students across the board, but particularly in mathematics.

Global Kids similarly seeks to improve the outcomes of our teenagers lives by giving them life-changing experiences in a safe and supportive environment. Our success is based on shifting our teens view of themselves from bad students, juvenile deliquents, or failures to community leaders, media experts, and engaged citizens. We put them in a different culture when they participate in Global Kids programs that emphasizes collaboration, mutual respect, and dialogue.

And we are definitely having an impact. Our Global Kids leaders graduate from high school and go on to college at very high rates compared to their peers. They become community leaders, activists, educators and more.

The question is, based on Gladwell’s hypothesis, what more could we be doing? It seems to me what our kids lack is the 10,000 hours it takes to become successes in their fields of choice. Our programs only last at most a couple of times a week, for 1.5 to 2 hours at a time. We don’t have the capacity or staffing to do more for our teens within our current structure or budget.

I see this problem most acutely facing our technology programs. Some of our kids show a lot of potential as digital artists, video editors, game creators and virtual explorers. But in their day-to-day lives they typically don’t have access to the computers or high speed internet that would allow them to hone their skills and connect with others who might help them develop those abilities.

What would it look like for us to create programs that allowed our teens spend as many hours as they wanted to hone their skills – whether that be video creation, community activism, music composition, or public speaking?

I think we should consider expanding access to our programs to our kids whenever they had the time to put into it. I.e. creating a Global Kids drop-in center where any youth could work on whatever project they wanted, within the parameters of GK programs, for as long as they wanted. It would have to have trained staff so our teens could get help when they faced roadblocks, as well as the resources for them to solve these problems on their own. It would have to allow for experimentation, play and failure without punishment or embarassment. And it would have to reward achievement, creativity and hard work.

Of course not every teen is ready to put in hundreds of hours of work on a global issue or to create a piece of digital media. But for those that are, we should make it possible for them to do so in a safe, supportive and accessible space.

Who knows what our teens could achieve!