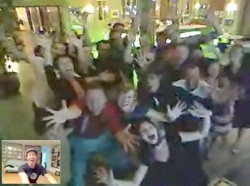 One of the members of my swing website Yehoodi, ShortYgeorge sent me a story that perfectly combines lindy hop and geekiness.  Apparently today is the one year anniversary of a dance in Amsterdam that ShortYgeorge started called "Swing Out of Pocket."  Sadly, George was not able to be there, since he currently resides in New York.

Instead of just sending his regrets, he and the other Dutch organizers came up with a way to have George DJ the event from his home computer in New York using Skype and other software. The picture you see above is George's webcam capturing people dancing both in Amsterdam and in George's apartment in NYC to music being live DJed from his desktop computer over the internet to Amsterdam (as well as by other DJs in Amsterdam.)

Sounds a bit confusing, but probably a lot of fun.

As technology likes this gets cheaper and more accessible, and internet speeds get faster, we might not need to bring in out-of-town DJs.  Just Skype them in (and pay them of Paypal) from wherever they are.