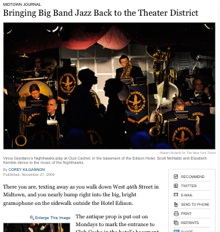 The New York Times has a swell tribute to Vince Giordano and his 1920s era jazz big band the Night Hawks in their NY Region section. I must admit that I've been hearing about the Night Hawks for awhile, but have not seen their regular Monday gig at the Hotel Edison. That needs to change soon!

The piece nicely describes how the band brings the jazz age music to life on stage:

They launch into some hot number, and dancers spring from their tables
to fling each other around the floor, dodged by waiters with food and
drinks….

…Onstage, Mr. Giordano, 57, drives the band, leaping from tuba to
bass saxophone to his distinctive aluminum upright bass, which he plays
like a madman in the old-school slap style. Then, debonair as a
silver-screen bandleader, he steps out front with the baton or croons
into a big round silver microphone.

His men, steeped in hot jazz idiom, never stray in their solos. The cornet players know their Bix Beiderbecke, and the saxophonists know their Frankie Trumbauer. They rely upon an array of mutes and plungers to create gimmicky sounds.

And check out the sweet video footage of the band in the online article!

I do have to disagree that the Nighthawks are "the last regularly working big band of its kind in New York." Ahem, what about George Gee, Michael Arenella and the Harlem Rennaisance orchestras?