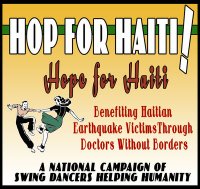 My friend George Gee sends out word about a cool fundraiser for Haiti relief and recovery called "Hop for Haiti."  George Gee and his band will be performing this Tuesday, February 2, at Swing 46 in Times Square with all proceeds going to international humanitarian group Doctors without Borders.

Lots of cool ways you can support at the dance party, including a raffle and silent auction of the following prizes:

The complete announcement from George follows after the jump…

An INTERNATIONAL LindyHop fundraiser for the victims of the recent
earthquake in Haiti, organized by Rusty Frank of Los Angeles! The NYC
event will be held on Tuesday, February 2nd at SWING46 jazz &
Supper Club and will feature the music of The George Gee Swing
Orchestra (featuring singers Hilary Gardner, John Dokes and special
guests). Raffles and silent auctions are planned. All of profits and
donations will benefit "Doctors without Borders," a
critically-acclaimed and accredited organization.

Rusty Frank raised $8000 at her fundraiser event last Wednesday at his Rhythm Club, can we match that NYC??

We will have raffles and silent auctions and featured items will include:

2) $50 Gift Certificates for dinner and dancing at SWING46!

5)
Copies of Frankie Manning's biography autographed by both Frankie and
the writer Cynthia Millman, donated by Cynthia Millman and Buddy Steves
(COLLECTOR ITEMS!!)

6) Opportunity to gain FREE ADMISSION to
every Tuesday night at SWING46 with George Gee for the remainder of
2010! That's plenty of swingin'!

7) Plenty of swingin's CDs to be raffled!

and
also an opportunity to view and sign Jeremy Sutton's (jeremysutton.com)
memorial painting of Frankie Manning, which has traveled the world
collecting messages (this is a special chance to leave your special
recollections of the legendary Frankie Manning).

more to be announced……..

THANK YOU FOR YOUR SUPPORT AND PLEASE HELP US SPREAD THE WORD!