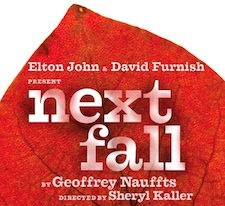 My friend Josephine and I got to check out the wonderful new play “Next Fall” at the Helen Hayes Theater not long ago. Given how much the live theater scene in New York has suffered during the economic downturn, I’m impressed with any new production that doesn’t have puppets, showstopping musical numbers, or movie stars in it.  “Next Fall” is particularly audacious since it explores issues of Christianity, sexual orientation, and the afterlife.

That said, “Next Fall,” written by Geoffrey Nauffts, is surprisingly entertaining and witty, along with thought-provoking and deep.

Read on for more of my thoughts on the play…

“Next Fall” opens in a hospital waiting room, where a group of friends and family anxiously gather after an accident. The story centers around the relationship of Adam and Luke, lovers who couldn’t be more dissimilar.  Adam is an older, cynical skeptic, while Luke is a younger, Christian idealist.  I thought they had nice chemistry together, but it does make one wonder what was it that made their relationship work.

Luke’s faith is the subject of much debate and discussion during the play. He views gay sex as a sinful act, and yet gleefully pursues a relationship with Adam, after meeting him at a party Luke is serving drinks at. Luke is still closeted to his conservative Christian parents Arlene and Butch, but otherwise out to friends.

Everyone in the production is solid and believable.  We’ve seen the stern, homophobic, fairly obviously-named character “Butch” again and again in these sorts of stories. But actor Cotter Smith doesn’t overdramatize the part. And Connie Ray as Luke’s mom Arlene handily steals the opening number with her overbearing,  talkative Southern character.

One of the core questions of the play is how can you be in a committed relationship with someone who devoutly believes in something that you actively disbelieve.  I thought of the characters Penny and Leonard from the TV comedy “Big Bang Theory” who try and maintain a relationship although Leonard doesn’t believe in anything beyond what science has proven and Penny consults psychics and reads her horoscope.  While there is a lot of comedy you can derive from these kinds of misunderstandings, I imagine it isn’t uncommon for people of differing faiths (or lack thereof) to manage to stay together despite those differences.

I personally have been in long term relationships with a devout Catholic and a mostly agnostic / disinterested Jew.  Both of them presented their challenges at times, but weren’t central dilemmas of our relationships.  Then again, I am a Quaker, which I think is one of the most open and accepting of faiths.

I guess it is just one of those negotiations that people of different faiths have to learn to navigate.  Can you accept and love this person, even if they hold beliefs that you don’t?  Would you convert for that person?  Or force them to convert to your faith?

“Next Fall” confronts these questions in ways that are funny and smart.  I hope it has a long and successful run.